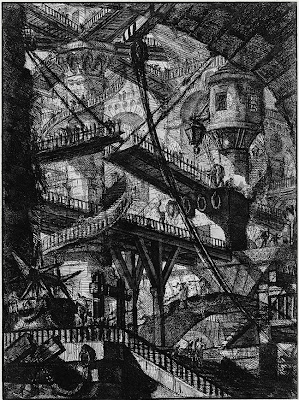 It's taken me a week to write about the Barbican BBC Brian Fernyhough Total Immersion. Firstly, this is not music for instant reactions. Secondly I was upset at the poor presentation. Just as you can't learn a language in small doses, you can't learn Ferneyhough's language superficially. That's why, five years ago, I suggested Ferneyhough as a subject for Total Immersion. No one needs to know much, but at least they'd get the idiom. But frankly, this time the BBC might as well not have bothered.

The evening concert was worthwhile, however. The UK premiere of Ferneyhough's 2006 Plötzlichkeit would be a Big Event in any situation. It's scored for massive forces - a Proms piece par excellence - and is as visually spectacular as it is to listen to. Big as it is, Martyn Brabbins understands how it works, so the BBCSO make it move with great energy.

Plötzlichkeit is made up of over 100 segments in 23 minutes. Thus the idea of "suddenness", new ideas popping u up unexpectedly, flying past before you can quite take them in.  It's like a densely populated panorama, where everything's moving on different levels and directions. Fascinating because it can't be taken in all at once. The more you listen, the more you get. Ferneyhough described it to Julian Anderson in an impromptu talk, surrounded by the musicians. "No global strategy" in the structure, which evolves instead from the fragments themselves. It's this inventiveness that gives momentum to what might seem an unwieldy work in theory. There are elements left open and what Ferneyhough  calls "inserts",  passages not related  to the other sections, which help anchor the work as it flows onwards. Always surprises to add sparkle, like descant trombones, or instruments played out of kilter. Three voices are embedded in the orchestra so they pop out unexpectedly. At first I thought they were synthesized, so that was a surprise for me. It must be heaven to study this piece in depth, observing the mathematical relationships and signifiers, but it works fine on a basic emotional level. It seizes your imagination and perks you up. 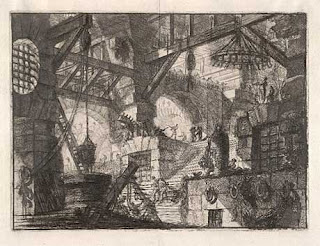 "No liberty without restraint" said Ferneyhough of his work. Often there's a sense of crawling out of traps, breaking bounds, struggling against overwhelming forces. The picture is one of a series called Carceri d'invenzione. by Giovanni Battista Piranesi (1720-78) showing unimaginably complex dungeons. Staircases lead to obstacles. Drawbridges are drawn up suddenly, blocking escape. Throughout, a sense of vertigo, where all that's gained could be lost in a sudden fall. Perhaps it's no accident that Ferneyhough was drawn to these engravings for his own series. Engraving is a painstakingly slow process which demands concentration on detail. Psychologically, it's forcible restraint. One mistake and the whole plate is wrecked.

Ferneyhough limits his palette this time to strings and winds but Carceri d'invenzione III (1986) still sounds like intense chamber music on a larger scale. A solo clarinet calls you into the piece, and soon you're caught up in swirling turns and counterturns. The music ends with limpid simplicity, but by now, you don't trust the apparent freedom. As I've said before, gamers (especially those who play Dungeons and Dragons) would talke to Ferneyhough instinctively. If only they knew! The market for Ferneyhough might be bigger than we realize.

Missa Brevis demonstrates Ferneyhough's interest in polyphony. The BBC Singers are among the best in the business, and are completely competent,. But the piece is a lot quirkier than this performance would suggest. A few years ago at Orford, I heard it as part of a programme with Ockeghem and others, sung by Exaudi, who specialize in this genre. How shockingly unique it sounded! Even when Missa Brevis was written  in 1969, Ferneyhough was distinctively different.

Hearing La terre est un homme (1976-9) after hearing Plötzlichkeit (2006) showed how far Ferneyhough has come. There are similarities, such as the huge ensemble and the sense of great portent. But it's a good show stopper because it's relatively easy to digest. Tuttis and crescendi soar like waves, but details like solo piccolo help you identify with the human scale of the work. Simple instruments like an uncommonly small trumpet, probably a specialist type, clapped sticks and tambourines. Magical long ending that dissipates into silence.

In the short 1pm concert, we'd heard Quatuor Diotima play Ferneyhough's very early Sonatas for String Quartet. "I was young then " Ferneyhough told Anderson. "I couldn't understand why Webern wanted to write miniatures, so I wanted to fill them out". Big mistake, since Webern was right. A bit cruel to give this piece of near juvenilia such prominence when so many important works were left out. One wouldn't expect the Diotima to venture too far into Arditti territory by essaying the Sixth String Quartet (featured at the Wigmore Hall and at the Symposium) but surely there could have been other choices?  The main reason for its inclusion might have been to highlight the sophistication of Plötzlichkeit but there's more to Ferneyhough than that.

Thank goodness Ferneyhough and Julian Anderson had a few moments together on the platform before the concert. Total Immersion Day had started with the comment, "The most amazing thing about Ferneyhough is that he was born in Coventry", which was met by a loud collective snort of derision from the audience. On the BBC Radio 3 broadcast this "amazing" concept was further developed, to explain Ferneyhough moving to Germany, which had also been bombed. But surely music comes into it, somehow? Then a long snip of Fürtwängler to illustrate that what is played isn't necessarily just the notes. Given that anyone who's heard of Fürtwängler can figure that out anyway, it's pretty pseud. Then the mock "interview" on the broadcast. Surely it would have been better to use Ferneyhough's own words from the 4pm interview instead of letting Tom Service repeat what he'd heard then? Surely they could have used a tape of Ferneyhough and Anderson speaking before the concert, since they were taping the concert itself ? Infinitely more enlightening.  Most people listen to learn, not unlearn. The BBC really must address the dumbing down of Total Immersion days.
Please read aboutt the Ferneyhough Symposium HERE
There is a review of the UK premiere of the Sixth String Quartet London premiuere HERE
at March 05, 2011

I agree with your comments on Sonatas-spot on.
As for Tom Service I welcome his bubbly,off the wall approach which is exemplified by that slightly eccentric comparison between Coventry and bombed out German cities.