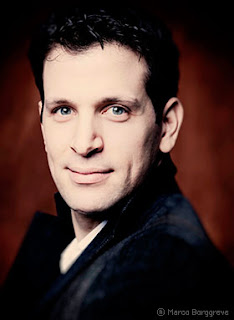 After hearing his stunning Leporello at Glyndebourne and his Figaro at Salzburg, there was no way I was going to miss Luca Pisaroni's concert with Wolfram Rieger at the Wigmore Hall yesterday. But I was delighted by how wonderful he sounded close up in  recital.

Extremely erudite choice of programme too. When Pisaroni started singing, it fell into place. He's primarily an opera singer and a specialist in Italian repertoire, Mozart and baroque.. He was even grew up in Busseto, Verdi's birthplace, so he he could coast to the top "to the manner born".

So the fact that he chose an unusually intelligent programme says a lot about his versatility and musical instinct.  He's also smart enough to have figured out the Wigmore Hall ethos. Although the auditorium wasn't full, those who were there were the real cognoscenti, serious listeners who really appreciate good singing (and good programmes). Some of them are getting on in years and don't get out as much as they used to, so the fact that they were there is a huge compliment to Pisaroni.

And Pisaroni delivered! Schubert wrote several operas in Italian, but instead of singing "bleeding chunks", Pisaroni picked Drei Gesänge, D902, (Metastasio, 1827) which look like excerpts but were written as stand-alones. This integrity brings them closer to Schubert's song repertoire.  They're Italianate but Schubert's Austrian aesthetic is clearly distinct. Pisaroni placed the last song in the group first, Il modo di prender moglie, (How to choose a wife - for money!) which was a good idea. It's a strophic comic ballad which doesn't make great demands and lulls you into forgetting who the composer might be. Then, the first song L'incanto degli occhi (the magic of eyes)  where the trure Schubertian voice is unmistakable. What a witty juxtaposition! Pisaroni not only has an amazingly good voice, but musical intelligence, too. Then you appreciate the humour in , (the deluded traitor) which isn't morbid, despite the title. When Pisaroni sang Ove son io? (Where am I?), and repeated it cryptically,  I had a vivid mental image of Schubert, frustrated by having too little success in a genre he needed to master if he'd compete with changing fashions.

Hence, Rossini. Again, Pisaroni chose songs rather than bits from popular operas, to connect better with Schubert.  Pisaroni is a bass baritone, so the darker timbres were extremely beautiful, but the voice is agile and flexible, so the transits upwards come with ease. Truly a gorgeous voice, full of nuance and colour.

Franz Liszt wrote transcriptions of Schubert's songs which are still popular today, though they sound much more Lisztian than Schubertian. They're florid, as if Liszt can't quite get the Lieder aesthetic and submerges it in too many notes. That's OK, they're different composers. Liszt also knew Schumann, the "new music" of the 1840's.  There are well over 70 Liszt songs for voice and piano, but Pisaroni again chose thoughtfully. Two settings of Heine, one of which, Im Rhein im schönen Strome is indelibly associated with Dichterliebe and Schumann.  Liszt's S272 (1855) is a more studied piece, reflecting a different approach to song, which is quite distinct, though the text in the last verse demands strong phrasing.

Pisaroni and Rieger followed with three songs Schumann didn't set, to emphasize Liszt's unique style. There are vaguely Schumannesque passages in the piano parts, though Liszt doesn't write extended preludes and postludes. Der Vätergruft (1844, Uhland) displays Liszt's gifts as dramatist. The ghost of a knight joins his ancestors in their tomb. Die Geisterlaute verhallten, da mocht es gar stille sein. (ghostly sounds fade and silence reigns again).  This could almost be a song without words, it's so effective.

This extremely well planned recital ended with Liszt's Tre sonetti di Petrarca S270 in the version for baritone and piano. Liszt as pianist triumphs. This isn't Germanic Lieder by any means but completely unique. Reiger played with great delicacy, matched by Pisaroni's sensitive modulation. His Benedetto sia'l giorno is truly a love song. He lingers gently on the words E i sospiri  e le lagrime so they feel like a gentle caress. An exquiste recital wonderfully realized. Next time Pisaroni appears, there should be queues around the block. He's singing  Argante in Handel's Rinaldo at Glyndebourne this summer with Sandrine Piau, who did  fascinating programme of Schubert transcriptions last week. (See review here)  So we've heard both Pisaroni and Piau in two unusual recitals in the same week at the Wigmore Hall. Brilliant!
photo : Marco Borggreve
at March 07, 2011