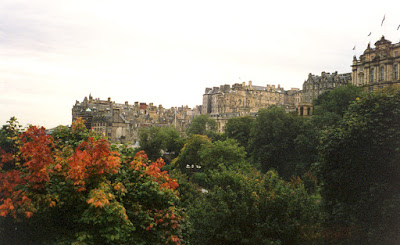 Will the Edinburgh Festival outshine the BBC Proms this year? Serious competition, even though lots of Edinburgh will be broadcast by BBC Radio 3 so no-one need miss out.

Then look at the repertoire! Big starter is Schumann Das Paradies und die Peri with Roger Norrington who brought the piece back into the repertoire. The first time I heard him conduct it (1998) he had to explain it to the sudience, it was so "new". It will be wonderful to hear what he does with it after all these years  Nagano's programmes are adventurous - Takemitsu and Unsuk Chin and Waltraud Meier no less, singing Mahler. Myung-whun Chung is conducting Messiaen, in which he's a force of nature.

Edinburgh are using the image of a green chrysanthemum (one of my favourite flowers) to emphasize that there'll be lots of non-western music in the 2011 Festival. Takemitsu, Hosokawa, Dai Fujikura, Unsuk Chin, all leading lights of modern music who happen to be Japanese or Korean. Even the Arditti Quartet is in on the act, though they've been playing these composers long before anyone else.  Chinese musicians too, like Yundi Li, much underrated because Lang Lang grabs the limelight, and Xuefei Yang, the guitarist, and the T'ang Quartet. Note they're all playing modern works, not traditional folk music. Modern East Asian music has a tradition completely of its own, which exists in parallel with a resurgence in traditional forms.

Asia is so huge that it really can't be spoken of as one unit, anymore than you might link the Lapps of Finland to the musicians of the Cape Verde Islands. But it's time we recognised the confluence of western and non-western music. Messaien, Debussy, Ravel, all influenced by non-western worlds. Hence the Jogyakarta Gamelan Orchestra. Gamelan captivated  audiences at the 1870 World's Fair in Paris. It's influence is huge - Debussy, Messiaen, Bartok, Colin McPhee, etc.  We wouldn't have nearly as much music for percussion without gamelan. Colonialism should be as dead in music as it is in politics (where unfortunately it still exists).

Impressive opera at Edinburgh this year too, and international, too. Jont productions are a good thing as they spread costs and make adventurous fare economically feasible., From Flanders comes the Vlaamse Opera with Rossini Semiramide,. René Jacobs conducts the Freiburg Baroque Orchestra in Haydn's Orlando Paladino (look at the singers!). Sir Andrew Davis conducts the Royal Scottish National Orchestra in Massenet's Thaïs. Again western fascination with non western themes, going a long way back. The "Chinese" opera here is a modern hybrid, a reworking of Hamlet, The Prince of Zhi Dan. It's by the Shanghai Beijing Opera Troupe. Beijing and Shanghai opera are quite different so I think this must just be Beijing opera done in Shanghai. Might be interesting, though there is a major traditional kunqu (southern, lyrical) opera Jade Hairpin in Amsterdam in June.

Even more interesting might be King Lear adapted, directed and performed by Wu Hsing-kuo and the Contemporary Legend Theatre. "Delivering a one man tour de force, Wu Hsing-kuo simultaneously depicts multiple characters, from the maniacal Lear and his ally Gloucester, to his evil, grasping daughters and the pitiful, lonely Fool. Further pushing the boundaries of traditional theatrical convention, he also appears as himself, exploring his own identity as an actor in relation to the fictional characters he portrays." goes the blurb. This sounds good as Wu is approaching the universal theme with fresh ideas, rather than doing a pastiche. Could well be the sleeper hit of the whole Festival. HERE is a linik to his 2007 performance of Lear in New York.

Lots of good recitals - Matila, Kozena, Damrau, Keenlyside, Kirchschlager etc most of which we can hear in London at the Wigmore Hall anytime. More of a surprise might be Julian Prégardien, son of Christoph. They're doing a two tenor, father and son recital, which should be interesting. Luckily, that is being broadcast so we won't miss out.

What will the BBC Proms 2011 have to offer? Hold your breath a little longer....