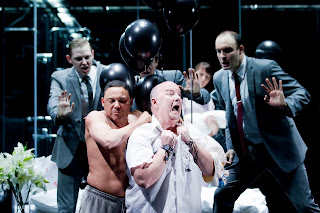 Monteverdi meets Reservoir Dogs! The ENO  Return of Ulysses  (Il ritorno d'Ulisse in patria) at the Young Vic hits you in the face. Blood-splattered bodies, but it's all there in the libretto.  Full frontal nudity, oral sex, not quite 17th century style, but perfectly in keeping with the psychic mayhem in the opera. This is great theatre and will be a hit among the theatre crowd. Thank goodness! Another nail in the coffin to the notion that universal drama can't be updated. Monteverdi himself wasn't doing authentic Greek tragedy.

Because the Young Vic is an amazing performance space, anything feels direct and involving. It's only when the initial wow factor wears off that flaws are revealed. But first the positives. Börkur Jónsson's set is superb. All glass, everything exposed, so even when singers sit on the toilet, there's nowhere to hide. Fate will get you, there's no escape. This designer-palace looks like a kitchen showroom, too perfect to be real. Which is the drama again. And because it moves, scene changes move quickly, which keeps up the dramatic pace. 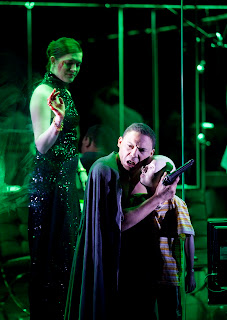 Striking set, but rather less striking direction. With a cast as large as this, Benedict Andrews has his work cut out. His solution is to have everyone doing something all the time, like Ericlea (Diana Montague) frying eggs which get thrown against walls, or Iro (Brian Galliford) in a clown mask slobbing in front of a TV. The giant film screens don't help much except fill the high empty space at the Young Vic. Maybe the idea is to make the opera feel like cinema, where many threads unfold at the same time. Maybe Andrews wants a cumulative effect of mindless, repetitive banality, against which the basic drama unfolds, but it's distracting. It's great to see Tom Randle's assets (hinted at in the text) but why does Minerva (Ruby Hughes) cover herself in flour? And why are things thrown at the walls and cleaned? I suspect there's a reason, but it's secondary to the main course. The kitchen simile can be taken too far. 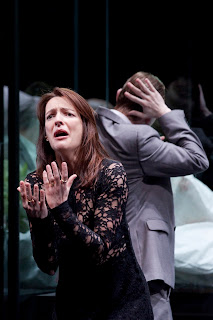 Tom Randle has presence, whatever he does, so his Ulisse vibrates heroic intensity, giving depth to the stylization inherent in Greek myth and in baroque opera. Pamela Helen Stephen adds something to Penelope, too. Her faithfulness seems more like frigidity. Pity Randle and Stephen together look like Obama and Palin (thank goodness no glasses). Katherine Manley's sex mad maid Melanto is well sung and characterized, so she's a good foil to Penelope's hang-ups, Thomas Hobbs's Telemaco played straight but very well sung. Because the performance is in English, you don't miss the exqusite vocal decorations a true baroque performance needs. No discredit to the cast, some of whom, like Iestyn Morris, cannot suppress their singerly souls (good for him!). Here, the emphasis is primarily on singers as actors not the other way round.

Occasionally, a glimpse of what might have been. When Randle and Eumete (Nigel Robson) sing together, their voices are garlanded by the otherworldly sounds of the lirione, played by Erin Headley, who pioneered the instrument's revival and is its greatest exponent.

The lirione is a kind of large viol, with extra strings, so it can produce amazingly rich, wailing chords extending the singing expressively. Authentic Monteverdi continuo. Opportunities to hear period chamber performance aren't common, so it was a great pity that the orchestra was pretty much sidelined. Period instruments are beautiful to look at as well as to hear - that's why they're ornamented. Here, we had not only the lirione but also baroque guitar (one of the theorbo players doubling),and a flûte à bec (period recorder) (Rebecca Miles). Gutsy, energetic battaglias for the fight scenes, in the earthy way period instruments evoke. Jonathan Cohen conducted members of the ENO Orchestra from the harpsichord.

But did the Young Vic audience even notice? With all the emphasis on stage drama, what about the drama inherent in the music? This music is a whole lot more than soundtrack. Because the staging is modern, there's no reason why authentic period playing can't be incorporated into a modern production. Indeed, I'd suggest the mores of baroque playing add to the sense of dislocation that is central to Ulysses's dilemma. He's a relic from the past returned to a stange new world.  I'm the last person in the world to knock modern staging (I even "got" the ENO Lucrezia Borgia) but in this production, musical values were pretty much ignored as irrelevant. Busy staging is always popular because it gives the audience lots to look at rather than to think or listen. This Return of Ulysses will be a big hit because it's strong on theatre (and movie) values. But fundamentally, it really isn't any different from the many other ENO stagings made by people who don't understand music. This isn't a mentally taxing production, and makes a great show on its own terms.