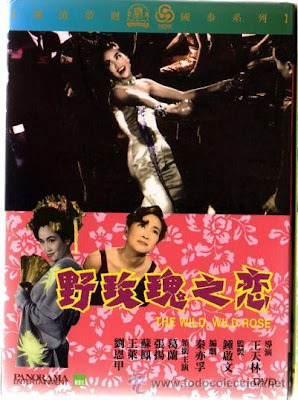 Wang Tian-lin's The Wild Wild Rose (野玫瑰之戀) (1960) is a very important film because it adapts Bizet's Carmen to make extremely pointed commentary on Chinese values at a time of great upheaval in Chinese society. It's set in Hong Kong, a city where everyone was a refugee, even the local born. Millions of people had been dislocated in China after decades of war and chaos. Like many films at that time, The Wild, Wild Rose begins with shots of neon lights and glittering nightlife, symbolizing prosperity. But this hedonism unfolds against a background of extreme suffering and deprivation. Understanding this context is fundamental to a deeper reading of the film.

The Wild, Wild Rose stars Grace Chang (Ge Lan 葛蘭) as Deng Sijia, a charismatic nightclub singer. Significantly, she's by no means a typical chanteuse. She has complete artistic control over what she does and uses her act to make statements. She's individualistic and feisty, "wild", a rose with thorns. But her fans adorte her. "I like noisy women", says one man, "they aren't boring". Not quite the typical model of a Nice Chinese Maiden.

In one scene, the commotion Sijia's act raises draws the customers away from the nightclub next door. The other nightclub features the kind of westernized crooner complete with "jazz band", that was the norm in cities like Shanghai and Hong Kong as early as the 1920's. These clubs were a means through which those who had money could display their wealth and sophisticated taste. The point this film is making, though, is that the musical fare was ersatz. Sijia's nightclub stands for artistic integrity.

Liang Hanhua (Yang Chang) takes a job as nightclub pianist. He trained  as a classical musician, and despises "nightclub" people". He represents the old scholar class who disdained the world of merchants the nightclub patrons come from. Old money and education, however, mean nothing now that war and dislocation have wrecked traditional values. Throughout the film, there are allusions to class, status and social mores, which Sijia challenges. Everyone's living on the edge. Sudden reversals of fate, poverty and wealth, just as in real life Hong Kong and in China for the last 100 years. The nightclub is a microcosm of society, where callousness destroys people. The old pianist Old Wang (Lei da) is kicked out of work because he's late. He's late because his wife is dying and he can't afford medicine. Maybe he, too, was a classical pianist, but now he lives in a squalid cubicle with three screaming kids.  In those days apartments didn't have rooms, people rented floor space cordoned off by boards. Communal living, but in an urban setting. Liang feels guilt about displacing Old Wang but there's nothing he can do.

Deng Sijia as the Carmen archetype shakes up all assumptions. Obviously, sexuality comes into the mix, because Ge Lan is gorgeous. She hands Liang a score. "You can't sing this" he says, because he knows La donna è mobile should be sung by The Duke in Rigoletto. But Deng understands its meaning. She overturns the Duke's refusal to accept responsibility for his actions. Women are fickle, she implies, because they can't depend on men. She's dressed as Escamillo in cape and toreador hat. Later she appears in a man's flamenco costume, wearing tight pants with buttons up to her waist. Gender stereotypes are shattered.

When Deng Sijia sings the Habanera, it's a glorious shout of liberation. "Love is an illusion" she sings, "I have fun with men rich or poor, whatever their class". Listen to how she exhales like she's in coitus. Ther camera pans on her naked legs. It couldn't be more explict. There's also another song Jajambo! which might not mean much today but is a reference to 50's ideas of cha cha, jazz and the exotic "wild" that were popular in nightclubs in those days.

Sijia decides to teach Hanhua a lesson about being snobbish. She seduces him while singing The Merry Widow. He can't figure out how a lowlife knows so much about classical repertoire. We know nothing about her background except that  she's been on the streets since she was 14. Maybe she, too, came from the upper classes and dreamed of better things, but she's suffered like everyone else in China at the time. She's beautiful, but to get where she is, she's been through hell.
Gender reversal in this film isn't about sexual preference but about politics. The nightclub is society in microcosm. Nightclub hostesses are bought like commodities but Deng doesn't play the game. "I sing", she tells her friend who has a sugar daddy, "I don't sleep with customers". Just as she doesn't sell out as an artist, she doesn't sell herself.

Liang Hanhua cannot cope even when they fall in love. He's so fixated on the old order that even when he's alcoholic and unemployed, he won't let Sijia do her thing or make a living.  His fiancée isn't much better. She, Wu Suxin (Yun Shen) represents traditional Chinese female models of deference, though she in fact pulls the apron strings. She needs, for example, to escort Hanhua to and from work like a child, so he won't get contaminated. She manipulates him by using his mother's authority. But as Sijia says, there's no difference between traditional womern and prostitutes. "You want him for permanent rice ration", Sijia tells Suxin.

Yet even Sijia, like Carmen, cannot escape. Sijia goes back to work, in her audition for a new nightclub, she sings Un bel di, dressed as Madama Butterfly, the nice girl forced into prostitution who sacrifices herself for love. In 1960  the image was still slightly shocking as memories of the Japanese occupation were still fresh. It's a parody of submissiveness. The disfigured triad boss who used to own Sijia comes out of jail and wants to claim her. Hanhua tries to kill him, in an interesting reversal of the Don José/Escamillo theme. When Hanhua gets out of prison in his turn, Sijia is waiting, faithfully. But Hanhua still can't handle the situation. Instead of finding out what's really going on, he stabs Sijia in a fit of rage. Even Suxin thinks he's a fool.

Ultimately, it's Sijia who makes the more altruistic sacrifice, compared to Suxin, making Sijia a true Chinese heroine after all. She dies, but she shows the way for others. In the end it's meek Old Wang, who represents mindless, uncomplaining sorrow, who explodes. Sijia raised money to save his wife, and Hanhua has killed her because he doesn't understand the real value of money, which is to benefit others. "How could you do that!" Old Wang howls, in indignation. Sijia's dead but we aren't supposed to accept the old order any more.

Beneath this Carmen narrative lies political dynamite. Like Bizet's Carmen, the Wild, Wild Rose deals with alternatives to conventional social norms. But Sijia isn't a gypsy outsider but an otherwise normal Chinese girl, with more education and sophistication than she's given credit for. Sijia could be Everywoman. In the context of Chinese society, she's truly subversive. So radical, indeed, that The Wild Wild Rose could teach western culture a thing or two.

This amazing movie needs to be understood, too, in the context of Chinese film and social history.Far too often Chinese culture is judged through west centric parameters, which totally distorts the perspective. It's a throwback to racist, imperialist colonial values. Instead, appreciate Chinese film from a Chinese background. The first Chinese movies were being made as early as 1909, not all that long after Mélies in France, and preceding The Keystone Cops and Chaplin in the US. Right from the start, film was seen as a medium through which modern ideas could be promoted. The first Cantonese film makers were politically radical. Lai Man Wai (Li Minhui 黎民偉, 1893-1955) was a supporter of Sun Yat sen. Watch the clip for more detail. Rumour has it that Lai used film equipment to smuggle guns to the rebels during the Xinhai uprising in 1911. One of the principles of the May Fourth Movement was to create change through education. Literature, film, and the arts were the weapons of this "real" Revolution, not guns or warlords.  Thus, many early Chinese films address modern issues against feudal practice. All Chinese modernizers emphasized social conscience, one of the basic principles of Sun Yat Sen's revolution, but also a tradition that goies back to Confucios and Buddha and the scholar ideal of social service. There is no "right wing" iu the modErn western sense.Ge Lan herself came from a prominent Gou Min Dang family, and worked in Taiwan.

Many of the earliest filmmakers were from Guangdong Province, with close links to Hong Kong and overseas Chinese communities. most of which were southern in origin. Indeed, the first studios, even in Shanghai, were founded by southerners. The Cantonese film community was so big that the first really big Chinese movie star, Ruan Lingyu (Yuen Ling yuk 阮玲玉 1910-35)  couldn't speak Mandarin, the northern and national language. Luckily, her films were silents. Again, Ge Lan is a radical. Unlike so many other Chinese actressses who coimmitted suidide and had sad lives, Grace Chang ius still alive in California. Look how healthy she is, and how athletic (see Mambo Girl).  She wasn't the first feisty Chinese heroine (think Li Lili) but she's a role model for modern women. Wang Tian lin, who directed, and his producers, obviously came from a later generation, but one which was even more radicalized. The Chinese film industry was left liberal. Indeed, there was no real "Right"  in China since all, even the Blueshirts, respected Sun Yatsen's Three Principles of social justice in theory if not in practice. Many film people declared for communism after 1949, and those who didn't emigrated if they could.  While once there was a Guangdong community in Shanghai, there was now a huge Shanghai community in Hong Kong.  The Wild Wild Rose is thus a product of an exile community, made in a city where everyone had been a refugee, as Hong Kong itself had been depopulated under Japanese occupation.  Everyone involved in this film, at every level, including Ge Lan herself, was a refugee who knew about trauma first hand. There are no gypsies in this version of Carmen, and Deng Sijia is an insider, but the whole film is a paradigm of dislocation and social chaos. So this film is, in a way, the voice of a minority that speaks for us all.

HERE is a link to buy the DVD. I've used Yesasia before, they're OK. Always check DVD Region first. LOTS of other Carmen pieces on this site, (Lubitsch, Chaplin etc)  incl full movie downloads, the early recordings of the Habanera (1891!) etc. Also even reviews of the Bizet opera ! Click on label at right that says "Carmen".
at March 08, 2011