Toru Takemitsu's Requiem for Strings (1957) was performed twice this month. On 4th March, Kazuki Yamada conducted it in his debut with the BBC Symphony Orchestra. On 11th March, the earthquake, tsunami and Fukushima disaster struck. Then a week later, the New York Philharmonic. Perhaps now Takemitsu's Requiem will get to take its place as core repertoire. It was written after the death of Fumio Hayasaka, the composer whose music is heard in the films of Mizoguchi and Kurosawa. In Japan, movies were seen as an art form almost from the beginning. Takemitsu himself was a keen film fan and wrote numerous movie scores. In the west, there's more division between genres, and more snobbery, but for men like Takemitsu, if a movie had artistic merit, it was an appropriate use of serious music. So it's fitting that Takemitsu's Requiem underpins Shohei Imamura's Black Rain (Kuroi Ame, 1989), made two years after Takemitsu's death. Full symmetry.

The film Black Rain is based on a 1955 novel by Masuji Ibuse (1898-1993), who grew up in the countryside around Hiroshima. Ibuse was with the Japanese Army in South East Asia. When the Bomb fell on Hiroshima, he was in a neighbouring village and witnessed the after effects at first hand. 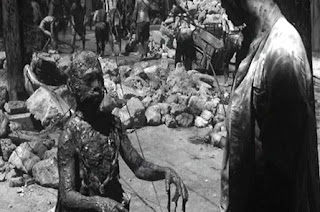 It's 6th August 1945, Yasuko Shizuma is at her uncle's house near Hiroshima, where she's been evacuated to escape the fire bombing of Tokyo. Uncle Shigematsu's at work in the city. Suddenly a blinding flash, then darkness. Horrific scenes in the city. A short grotesque creature goes up to a man and cried "Brother! It's me" but the man can't recognize who it is under the burns. Only when he sees the child's school belt buckle burned into his skin does he realize the monstrosity is his little brother, covered in scars. There are real life photos of wounds like that. Be glad this is only a movie. 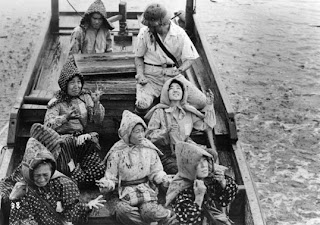 As Yasuko and her aunt escape in a boat, black rain falls on them. No-one knows what's happening.  Yasuko and her aunt don't seem injured.  Five year later, Yasuko has grown up in the idyllic farming village by the coast, where they still grow rice in the fields and catch carp in the river. But something's wrong. People are dying gruesome deaths, from cancer and from radiation poisoning. Because Yasuko's so pretty, she gets many marriage proposals but they fall through when people discover where she was when the Black Rain fell.

Jilted time after time, Yasuko makes friends with Yuichi, an ex-soldier with PTSD who attacks cars and bikes because he think's they're enemy tanks. He spends his time carving stone jizu (Buddhas) which Yasuko loves. One day Yuichi's mother comes and asks if Yuichi can marry Yasuko. Uncle Shigematsu's shocked as there's a huge social gulf between them and Yuichi's clearly insane. But Yasuko walks in and says that it's what she wants because with Yuichi she doesn't feel alien.

Uncle and aunt are falling ill. Somene's been eating aloe leaves in the garden (reputed to cure radiation sickness). Uncle thinks it's his wife. She, however, worries about Yasuko who seems perfectly healthy. One day she spots Yasuko undressing. There are weals on her skin and her hair is falling out. Shigematsu takes Yasuko to the river to catch carp. They spot the "King of the Carp" more than a metre long, leaping out of the water, strong and healthy. "I've never seen him before, in all these years!" gasps Shigematsu, hoping it's an omen. Soon Yasuko's so sick, she's taken away to hospital. Shigematsu says "If there is a mutli coloured rainbow, she'll come back." But you can see from his eyes he knows it won't happen.

There isn't a real soundtrack in Black Rain. Mostly it's just conversation, sound effects and silence, without distraction. This ma the movie feel intimate, enclosed, enhancing the sense of tense secrecy. Takemitsu's Requiem pops up in small snatches at key moments, such as when the aunt realizes Yasuko isn't well. At the end, when Uncle Shigematsu's eyes follow the ambulance down the valley and survey the hills and fields around him, the Requiem wells up, austere and moving, yet at one with the scene around him.The movie itself is beautifully shot - long, loving panoramas of rice fields, traditional farm houses and close-ups of leaves seen through sunlight. Excellent, sensitive acting and direction. I think I read the book when I was an undergraduate, because I remember how poetic the author's descriptions were.

Takemitsu's Requiem wasn't written about Hiroshima or the Bomb, but the war experience scarred the Japanese people as well as the countries they occupied.
Sometimes art helps people to cope with trauma - Yukio and his bizarre granite Buddhas, for example. It's also important to remember that Japan was itself occupied by the Americans until 1952 and hard news about the Bomb was suppressed. Please read about Masako Ohki's Hiroshima Symphony, written at a time just like that pictured in the film. There's a whole raft of creative responses to the period, which will be worth studying. For western people, it's almsot a blank page, but perrhaps Japanese musicians and writers can fill us in.
at March 20, 2011