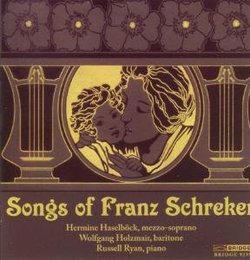 Franz Schreker was "a master of interior states" writes Christopher Hailey, Schreker's biographer.  "The protagonists of his operas are driven by emotional psychology rather than by external events, ideas or philosophical concepts". Not Wagner or Mahler then. Nor quite the world of Ewartung or Wozzeck.  Schreker's songs are interesting, approached on their own terms, like snapshots of experience, contained within the limits of piano song.

Only 33 of Schreker's 49 songs were published in his lifetime, the remainder only in 2005. This CD Songs of Franz Schreker (Bridge 9259) is the most extensive recording,. Wolfgang Holzmair, Hermine Haselböck and Russel Ryan are excellent. One could hardly hope for better performances. Holzmair specializes in less well known Austrian repertoire, so his interpretation evolves from long familiarity with the period. His voice is clear, clean and assertive, yet with a soft Austrian burr that adds a warm glow. Haselböck has an equally elegant style, which suits these songs well. One, Im Garten unter der Linde dates from 1896, when Schreker was only 17.

Much more attractive is Das hungernde Kind, from 1898. It's the same text from Des Knaben Wunderhorn that Mahler used in Das iridische Leben five years previously. Schreker's setting is briskly foursquare. No angst here, no psychological insight whatsoever. The tempo quickens slightly as the child gets more frantic, while the mother's music smiles, enigmatically. One shouldn't sympathise with child abuse, but the song's so charming, Yet what can it mean?

From this period also come two Mutterlieder songs to poems by Mai Holm, which Schreker revised extensively and published as his op 5. They're here in context with other, unconnected songs about the death of children  Like post mortem photographs, songs about the death of children were popular in the 19th century when child mortality was high. Although Schreker's sister had died some years before, it's probably not a good idea to read anything too personal into these songs of lyrical, stylized grief. If anything, the imagery fits best with the songs of flowers, a symbol of beauty that fades too fast. Rosengruss is attrractively ornamented, but for me the most touching is Rosentod to a poem by Dora Leen (Dora Pollack) who was for a while engaged to Schreker and who died in a concentration camp in the 1940's. There are three other songs to her poems, Spuk, Traum and Sommerrfaden, all set with a delicate touch so the naive simplicity of the poems isn't compromised.

More sophisticated, and more musically satisfying are the later songs, such as four of the five settings of poems by Edith  Ronsperger (1880-1921), written in 1909, included to give a broader perspective. One of the best known is  Der Dunkleheit sinkt schwer wei Blie (Darkness falls as heavy as lead). Hailey draws the parallels with Schoenberg, in particularly Ewartung, though it's a much less complex piece and lasts only 3 minutes. But Schreker blends oppressive dark chords with menacing intervals.  It's highly dramatic, even though it doesn't develop into something more. This is Schreker, opera composer, showing what he can do with song.

It's also the spirit of Expressionism. The Cabinet of Dr Caligari  (click link for full download)! The current fashion for downgrading modernism would have it that Schreker was retrogressive and backward-looking.  Just as the Nazis suppressed composers like Schreker, "fans" these days suppress what makes them modern and worthwhile. Schreker knew Schoenberg, for example, and was well aware of society changing around him.  He had no illusions about conservatism or tradition for its own sake.  Think Irrelohe with its premonitions of the collapse of the old order.  So it's good that this worthy recording includes the song Das feurige Männlein from 1915. A troll astride a demonic stallion. It's First World War Feuerreiter, unleashing Armageddon in his trail. Weh! schreien die Menschen, die Bäum' und die Stein' - und das feuerige Männlein lauscht graig hinein.
Please see my other posts on Schreker, more here than other sites.
at March 10, 2011