Robert Hugill When a Man Knows 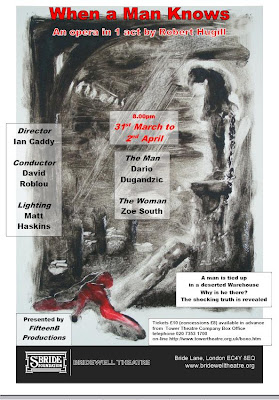 "A man is tied up in a deserted warehouse.
Why is he there? The shocking truth is revealed."
When a Man Knows - intriguing title for Robert Hugill's chamber opera on 31/3, 1/4 and 2/4 at the Bridewell Theatre, off Fleet Street. HERE is my review of the performance.

Dario Dugandzic is the man and Zoe South the woman. The opera's based on a play by Alan Richardson. "I started", says the composer, "by imagining the opening with just a solo cello playing, appearing out of the darkness. Instead of an overture, there developed a prelude whose abstract quality I rather liked."
"The chamber nature of the piece meant that it would be an entirely practical proposition for me to arrange a performance. I continued to worry about the length and other drawbacks, but the idea stuck in my mind. I started drafting ideas and came up with a novel solution to the problem of it being a two-hander. The original play on which the opera is based includes copious stage directions; this is particularly important at the opening, before either protagonist speaks. By setting some of these, I was able to introduce additional voices, to give the soprano and baritone a rest and the piece would work quite well in concert. If the chorus described the action then the audience would miss the staging less. Also, the rather abstract nature of the opening rather appealed to me." 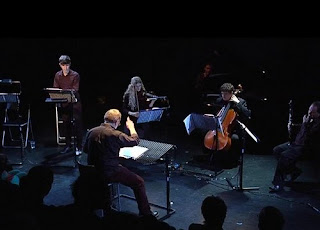 "I had to do some pretty radical surgery on the play in order to reduce it to a settable length, but this is always inevitable when turning a play into an opera. In fact it is something of a good thing. At a recent performance of George Benjamin's opera *Into the little hill*, the librettist wrote in the programme that an opera libretto should always read as if there is something missing; which there is of course, the music. A libretto should not be complete in itself, but leave space for
the music."

"The libretto was constructed around set arias and recitatives, though this scheme dissolved somewhat during the composing. The does opera arias for structure though they can merge into the recitative; the three main dialogues for the man and the woman take their structure from a ground bass. The music is generally tonal, though one of the woman's final arias uses a tone row. In style, recurring short motifs tend to predominate over long breathed melodies."

Robert Hugill's When a Man Knows is conducted by David Roblou (Midsummer Opera) and directed by bass baritone Ian Caddy. Booking details HERE Support independent companies and new creative work !!!! Robert Hugill is a very experienced composer, and his Testament of Dr Cranmer is available on CD thru Divine Art. Read more about him HERE Lots of sound samples !
at March 26, 2011

Email ThisBlogThis!Share to TwitterShare to FacebookShare to Pinterest
Labels: Fringe

Mention of Dr Cramer on CD reminds me of the world premiere alongside others in a varied programme. My review: http://www.classicalsource.com/db_control/db_concert_review.php?id=2691