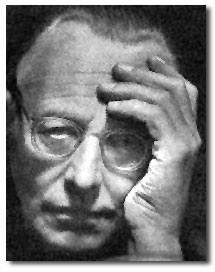 Everyone knows Carmina Burana, even if they think it's the sound track to TV ads. Ironic then, that Carl Orff should be the subject of O Fortuna, the 2008 documentary by Tony Palmer. Because Carmina Burana is so familiar, responses to Carl Orff himself are coloured by "TV thinking", superficial, ill informed and kneejerk, like the cliché that Carmina Burana is a Nazi tract. But Orff deserves deeper analysis. He was a conundrum, a complex person who concealed his inner life even from himself. He's a conundrum. Yet his legacy benefits millions who don't care or know much about European music or history.

Palmer's documentary doesn't attempt psychological depth but presents material that might otherwise lurk in archives. Orff's daughter Godela appears, as do Orff's last two wives. At least one of them is dead. I don't know when the interviews were made, or by whom, but they're valuable sources.  The footage of the last wife, Liselotte, is vivid and moving, probably seen for the first time.

Michael  Kater appears too, to add perspectiuve. "Orff wasn't a Nazi, he hated what they stood for", he says, but Orff also didn't make life difficult for himself. He figured that when Pfiztner and Richard Strauss died he'd be the most important composer in the Reich. Big consideration. Always broke, he accepted money from the State, but that didn't automatically compromise him.  Ralph Vaughan Wiliams and Sibelius did so too. More worrying was that he didn't help Kurt Huber, whose White Rose cell resisted Hitler, yet later claimed he'd actively helped. It's relevant that Karl Amadeus Hartmann, who knew everyone involved, treated Orff with sympathy. Unless you've lived in a closed totalitarian state, moral ambiguities are hard to judge. Perhaps Orff felt survivor guilt and needed to convince himself. A warped way of making amends, but, as Kater says, "psychologically significant".

Orff's other legacy was Schulwerk, the concept idea that music was a fundamental source of expression. One of the most remarkable moments in the film comes when a Schulwerk teacher tells of a first year child in a war zone who came to school deeply withdrawn. Her family had been massacred in the night and the child didn't know what to do, so she went to school. Later, there's a clip of children with learning disabilities using the system as therapy. What the film doesn't do is connect the Schulwerk ethos to the wider issues of Orff's personality. By its very nature the concept eschews wealth, power and status. It's based on the simplest forms of expression, as simple as using the body. "Everyone has a voice within themselves" says another teacher.  "We don't listen to each other, we don't listen to ourselves.... but you cannot make music without listening. Orff teaches us to listen for more than notes, to listen to others and to the world around us in which we all live".

The film doesn't make the connection between what Orff's system teaches and who Orff was as a man, but I think they are inextricable. Godela Orff spoke about her father's childhood fascination with puppets and fantasy. Theatre is a form of expression through which you can explore feelings and ideas without necessarily putting yourself in jeopardy. Orff wasn't personally warm and giving, perhaps because he was quite vulnerable within. Hence the contradictions in his life. Yet he intuited how others could find themselves.  He couldn't deal with reality too well, but he recognized that the process of becoming a whole person was through expression.

Curiously the film hardly deals with Orff''s music at all. It's loosely based around a semi staged performance of Carmina Burana, but the music isn't integrated into the narrative. Yet, since it's the one piece everyone knows, it does need confronting. Listen to its angular rhythmic shapes and the violent surges of sound. These fool many into thinking it's a Nuremburg rally in music. But then listen carefully. The texts depict a medieval world where life was short and barbaric, where pleasure had to be grasped in an almost animalistic way before inevitable death. Strictly speaking not all that different from living in the 20th century. Godela claims that the piece was at first greeted with stunned silence until she cried out, "Listen you bastards!". Maybe she too muddled memory with wish, for young girls don't dare confront Party brass like that. Quite likely that the audience didn't know what to think as these brutal jagged rhythms do have an affinity with "primitive" non-white music. Orff had lived through the Weimar after all. Normally music like this might have been considered degenerate, but the audience was fooled by the fake Germanism. Remember Hartmann and Simplcius Simplicissimus.

What I really didn't like about the film was that it started with an ad and ended with an ad. Brand names prominently emphasized. We know the music is used in ads, but this is so blatant that it turns the film into a commercial. Orff was morally compromised because he took the easy way with the Reich. Is the film morally compromised since it has no qualms about commercial exploitation? Pretty tacky.  I'm sorry but this ruined the integrity of the film for me. Orff, for all his faults, wasn't crass.
at March 11, 2011