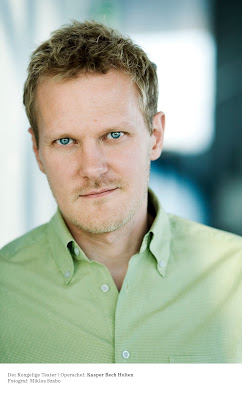 News just in. Kaspar Holten has been appointed Director of Opera at the Royal Opera House, London,  to suceed Elaine Padmore when she leaves at the end of the 2010/11 season.

Holten, 37, has been Artistic Director at the Royal Copenhafgen Opera since 2000. He was behind the Copenhagen Ring (2003-6) released on DVD to great acclaim in 2008. He's created more than 60 productions worldwide. He's also interested in opera on film. He's made Juan, a modern take on Don Giovanni which will be released later this year. Features Christopher Maltman stark naked ! Let's get that at ROH

In the announcement, Tony Hall, Chief Executive of the Royal Opera House, said: "I am thrilled that Kasper Holten is to join the senior management team.  He has done some fantastic and innovative work as a stage director and at the same time he has confirmed the Royal Danish Opera's status as a major player in the international opera world."

Holten officially arrives in September, but since lead times for opera seasons are long, he already has interesting plans.  He says  "I had promised myself to focus more on my artistic work when my contract in Copenhagen expires this summer after 11 exciting years. But if there is one job in the world that I cannot resist, it is this one. To work with Antonio Pappano, Tony Hall and Peter Katona in what I regard as the leading opera house of the world is an incredible opportunity for me".
And here's Rupert Christiansen in the Telegraph.
photo : Miklos Szabo
at March 18, 2011