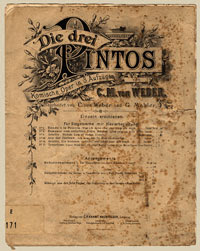 Ever enterprising UCL Opera presents Weber and Mahler Die Drei Pintos (The Three Pintos) at the Bloomsbury Theatre, London.  It's not obscure, and nowadays anything with Mahler's name tagged on it gets maximum attention.

But it's also an important part of the Weber legacy. It's classic faked identity farce. Clarissa, an heiress, has been pledged by her father to marry a man called Pinto whom none of them have ever seen. Pinto's father saved Clarissa's father in a war, so that's quite enough. Pinto no 1 knows a bit about bloodstock breeding, but nothing else. So Pinto No 2 thinks that reason enough for stealing the bride and her money. Meanwhile the heiress is in love with another man, whom Pinto 2 persuades to pose as Pinto 3 and fool the bride's father. Love will out! What is different from the usual happily ever after is that Pinto 1, through no real fault of his own, gets trounced.

It's very much a period piece, connected to Weber's other work. It's set in Spain because the idea of arranged marriage between grandees wouldn't work so well in a German context, though of course such things happened. Besides, audiences of the time liked exotic settings - think Goethe. Or even closer, Weber's delightful comic opera, Abu Hassan, certainly not "obscure" if Schwarzkopf and Schreier enjoyed singing it (though not together).

The Mahler connection comes in because the Weber family asked him to complete the manuscript. Mahler cobbled together bits of incomplete Weber material, and wound in familiar themes (hear the witty snip from Der Freischütz) Although Die Drei Pintos is not a million years from the folk humour of Des Knaben Wunderhorn, Mahler's priority was Weber. Die Drei Pintos is pertinent to Mahler's evolution as a composer. By 1886, he'd already completed his First Symphony, Das Klagende Lied and Lieder eines fahrenden Gesellen, so already he was established on a distinctive path of his own. The Mahlerian aspects of this opera come through strongest in the orchestrations, especially in the Entre'acte where he's using textures and instrumental colouring from his own time, not Weber's, but in those days people din't have recordings to compare with and weren't bothered about authenticity.

Although some of Weber's other works, like Euryanthe, are notoriously difficult to stage (ROH had a stab at that 10 years ago), Die Drei Pintos is relatively straightforward. No dragons, no Wolf's Glen, no supernatural spirits. At UCL, directed by John Ramster with designs by Adrian Linford, the staging is ultra bright and colourful. Minor concessions to Spain, like corny Spanish accents which thankfully aren't consistent, but the opera really isn't "about" Spain. But Pinto 2 (Don Gaston, Robin Bailey) has just graduated and celebrates in a bar. The universal student.  In comes ultra yokel Don Pinto (Nick Goodman) and Don Gaston sees a chance to get rick quick.

Fabulously camp and funny scenes where Ambrosio, Don Gaston's sidekick (Edward Davison) teaches Don Pinto how to chase women. Because this production is cheeky and cheerful, it can do innuendos Weber and Mahler would never have dared. Fart jokes, even, and High Camp. The mainly student audience loved it, and rightly so. At Wexford, I think the production was set in the 1930's grimly austere. Maybe the comedy bounced off well - certainly the heavy footfalls in the recording I have (not the one on Naxos) would suggest vigorous romps. The UCL production goes straight for farce, bright costumes, kitsch gypsies, and Clarissa the heiress (Lara Martins) a Schiapirelli pink minidress like Christina Onassis.

I much prefered the verve of this production to last year's unimaginative Genoveva. Somebody's thought about what Die Drei Pintos means!  And it's perfect for the audience and circumstances. Bodes well for the future, as most of the UCL crowd are generalists, not drama or music specalists. This is the crowd to convert if you want to fill houses in 10 or 15 years time.

Good performances by the principals, special mention of Lara Martins and Larissa Blackshaw with amazingly long legs. She used to be a ballerina and is a naturally gifted actress. She can sing expressively, too. Striking stage presence, aided by peacock blue outfit ( Libby Blogg/Michelle Bradbury). Hope she gets to keep the dress.

From where I was sitting, the orchestra was a bit rough on the ears, but played with gusto as student orchestras should.

Maybe one day UCL should do Hugo Wolf's Der Corregidor.  Although there is a loose Mahler connection, Wolf got his ideas from that other great German exoticist Paul Heyse. Although Der Corregidor has problems, it's based on vignettes from Wolf's Spanish Liederbook which is brilliant.
at March 23, 2011