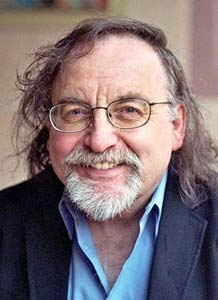 "Let's not use the C-word" said someone at the IMR Ferrneyhough Symposium in the Senate House, London, part of a two part Ferneyhough Total Immersion.  Meaning, "Let's not talk about New Complexity in case it scares the punters". But why? Brian Ferneyhough is complex, which is precisely why he's fascinating. No-one needs to know every little detail to get pleasure (and pain) from Ferneyhough's music. Indeed, effort is part of the process. Res severa est verum gaudium,  "true pleasure is a serious business".

One of the papers at the conference was about time organization in Caceri d'Invenzione II.  The 'irregular metronome' occurs along mutually-interacting layers  of time organization... (and part) of a graduated tension field between large tempo relations and subtle metric nuances". But even someone like me can follow the gist of that. Like Ferneyhough's music, there are lots of different levels through which you can enter and progress. So what if it's complex? That's where the fun lies. 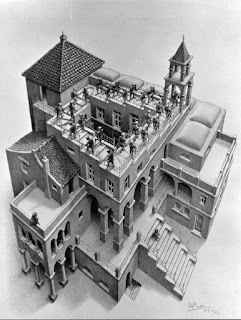 Fun and Ferneyhough? Yes! Gamers would love this music because it can function like a supremely devious puzzle, with so many possible angles that you can get something whatever level you operate on.  In his keynote address Ferneyhough himself spoke about jigsaws. When you're fitting the pieces together are you fitting physical shapes or "making" a picture ? Why do things fall in place the way that they do? Why do the pieces lock together even though the shapes seem random?  Is it the shapes we follow or the image? What if the picture is abstract or blank? For me the fascination of Ferneyhough's music is exactly this sense of multidimensional plasticity, like the staircases in this MC Escher etching, or the one where birds morph into fish in a stylized pattern. Obviously the more you can analyze, the more you get, but there's no reason why the process shouldn't be enjoyable because it's elusive. It's boring if you can get everything instantly.

Another good paper at the symposium was Matteo Cesari's Achievement of the Unachievable. Cesari's a flautist and worked with Ferneyhough to try to crack the code to his formidably arcane manuscripts. Millions of tiny markings, intricate instructions. Yet the secret is to interpret what goes into a performer's psyche and what makes it through to audible sound. Performance is more than mechanical note-processing,  it's a creative act of engagement with a composer's inner world. Sisyphus was cursed by the gods to keep rolling stones uphill, which would roll back each night. Enormous effort, and a goal that could never be achieved. Yet there's a kind of warped logic in the situation. Maybe no-one will find nirvana but if you don't even start to try, there's no chance at all. One thing these papers didn't go nowhere near is Ferneyhough's interest in the darker, almost S&M aspects of challenge - Antonin Artaud's Theatre of Cruelty and the idea that sublimation can be achieved through extreme stress. Part of Ferneyhough's uncompromising  asperity is this journey past the boundaries of comfort.

Then there's the metaphysical side to Ferneyhough's music. It's not simply that he's interested in early music polyphony and the cosmic mindset that comes with it. Julian Anderson reading Lois Fitch's paper linked Ferneyhough to Blake for both approach the universe with a sense of mystery. Blake's God is unsettling, his relationship to man not quite as benevolent as it might be in the Bible. Yet the concepts are deeply embedded in the music itself. Fabrice Fitch's paper Polyphony : Ferneyhough and prima prattica drew the connection between Ferneyhough's arcane notation and early medieval practice.  Notations in early music aren't standardized, for music was passed on through oral tradition. Traditional forms within which there was improvisation and invention. Ferneyhough not only quotes from early polyphony but integrates the mentality.

Therre was a screening of Colin Still's latest documentary Climbing a Mountain- Ferneyhough's Sixth String Quartet (produced by Paul Archbold) made with the Arditti Quartet at Donaueschingen in 2010. Still's films are wonderfully informative, so I hope we get to see this one again. There was a short  evening concert, too, with Ensemble Exposé (cond Roger Redgate)  which featured O Lux, a UK premiere.

What is so frightening about complexity that it puts Ferneyhough's music somehow out of bounds? Frankly I don't care if he never makes it on Top of the Pops, because popularity is no arbiter of quality. There is a snobbishness in new music circles that would like to exclude mere mortals from the Chosen Few, but it's not necesarily best for the music, or indeed, for the masses. At the Saturday Barbican evening concert there were quite a few in the audience who had no idea who Ferneyhough was and came along because it was a Night Out. They seemed to be having a good time even though it might not quite have been what they expected. If you set yourself up for difficulty, difficulty is what you get. But there are many ways into Ferneyhough, one of which is simple instinct. Ferneyhough talks in convoluted sentences but inside there's an extraordinarily sharp mind that's surprisingly accessible. Because the venue for the post-symposium party was changed I misdirected Ferneyhough to the wrong building, so he went on a wild goose chase. When he came back, he scolded me with a twinkle in his eye, "They'll have finished all the drinks!"

My congratulations for a great review. Now, having been there too, I seriously doubt that the avoidance of the 'C-Word' manifested by one of the participants had the meaning you propose in the context it was mentioned.
I guess it had to do with trying to avoid the most banal commonplace when dealing with Ferneyhough's music, a concept that has become a 'label' and as such, one that makes those who are labeled with it rather uncomfortable. Hence the taboo around it.

I think the man who was speaking was being ironic, but still. look at the reaction when the Today programmesaid Ferneyhough was difficult:
http://johnsonsrambler.wordpress.com/2011/02/25/ferneyhough-gets-the-todjavascript:void(0)ay-treatment/

...of course he was being ironic! ...and by the way, I'm pretty sure his exact sentence wasn't "Let's not use the C-word", but something like "...I was avoiding to use the C-word".
Anyway, again I don't think he meant with that anything even close to "Let's not talk about New Complexity in case it scares the punters" as you interpreted, but clearly making a point on the empty, over-saturated concept and thus expressing his reluctance to discuss in those terms.
The Today programme you mention is the clearest example of that (I mean, is there anything more banal than saying 'Ferneyhough's music is complex'?) and TRJ 'the rambler' successfully pointed this out in the blog you cite.