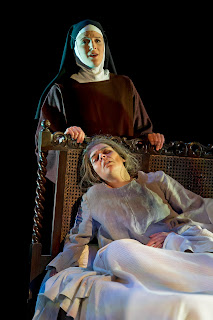 Dark, fractured shards shroud the stage at the Guildhall School of Music and Drama for Francois Poulenc's Dialogues des Carmélites. The shards resemble broken glass, as if the audience is peering through a window that has been shattered.  For the French Revolution has shattered society: everything's being smashed, the convent, the aristocracy and innocent lives.  It's also a vivid metaphor, for Poulenc's edgy, angular music thrusts and cuts relentlessly. No easy lyricism here even if Poulenc's idiom is  easier on the ear than many other composers' might be, given such material. This production, directed by Stephen Barlow and designed by David Farley, is impressive because it's so musically astute.
Full review in Opera Today HERE.
Dialogues des Carmélites is an unusual opera because it unfolds as a series of disconnected tableaux, like the Stations of the Cross. This structure is significant, for Poulenc is connecting the nun's journey to the guillotine to Christ's journey to the cross. Poulenc further emphasizes the non-linear progression by writing expressive interludes which are almost as much part of the narrative as the text. In "normal" productions this subtlety can be lost. At the Guildhall, the shards close in, isolating the stage, so the audience is forced to pay attention to what's happening in the orchestra.  Simple inexpensive staging but extremely effective. I suspect they're just boards swathed in velour, but litt from above, the shards look like glass. Lit from behind, they resemble rocks. (lighting design : Declan Randall). The shards also hide the many scene changes, so momentum isn't wasted. A practical as well as an artistic solution to the musical demands of this remarkable opera. 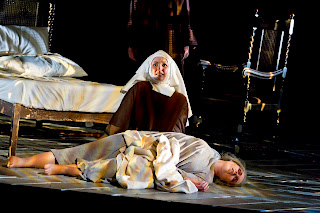 This is what good stagecraft should be, created around music and meaning. This isn't a typical opera because it's very direct and to the point. No decoration in the music, so no fussy effects on the stage. In the Final Act, the mob descends on the Place de la Révolution. The guillotine is shown only in the distance, hidden by the mob, who are dressed in shades of red. As the mob moves, the red  moves, like a stream of blood. No need to depict the executions - the image expresses so much. The nuns stand in a line confronting the audiernce. In real life they'd hardly be wearing immaculate vestments, but spiritually they're already among the angels, as one by one, each nun is picked out by spotlight. At last the shards are vanquished, like the barbarism they depict. Sister Blanche of the Agony of Christ is shown alone in a moment of glory, transfigured with light.

This production is so good it could be transferred to a much bigger, higher-budget house and still be astounding. Since the Guildhall also teaches stagecraft, it means that the students will be learning their business from good hands. Even singers and musicians benefit, because by taking part, they're  learning how intelligent, musically-informed staging is made. A useful skill now that audio only recordings no longer dominate the industry and opera is once again appreciated as all-round drama.

It's a pleasure to watch how the GSMD students respond. For a change, they're acting very well, for Barlow's good at directing people. Very natural movement, often closely co-ordinated with musical detail. Nicely blocked crowd scenes, concentrated when needed (as in the mob), diffuse when the nuns feel isolated in their travail. The nuns are treated like individuals, which is what they are, despite the regimention of the Carmel.  Principals are well cast too - it's good to hear familiar voices get good exposure.

The role of Blanche in Dialogues des Carmélites is interesting, because Poulenc isn't explicit but hints at worrying traits of neurosis and self-delusion. Something's very not right about a girl who screams at the butler's shadow and causes her brother such anguish. Nowadays such girls wouldn't be accepted into the novitiate. Whoever sings Blanche needs to fill in the backstory for herself, so it's convincing when Blanche makes her sacrifice. Anna Patalong sings 3/3 and 7/3, Natalya Romaniw on 5/3 and 9/3. They're both major names at GSMD. 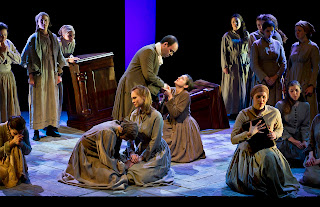 Blanche is emotionally vulnerable while the old Mother Superior, Madame de Croissy (Cátia Moreso) seems strong but dies a traumatic death. It's a high point in the opera because it reverses the idea of a pious person being free from doubt. Moreso sings with a force that belies her supposed physical weakness. Poulenc's not into literalism but spiritual veracity. Just as Blanche's music is hyper, so is Mme de Croissy's, though of course in different ways.  Both are more affected by the turmoil around them than they let on.

Mère Marie (Sylvie de Bedouelle and Amy J Payne), Mère Jeanne (Sioned Davies) and Madame Lidoine (Sky Ingram) are all strong, conventional characters. The book that inspired the play on which Poulenc based his opera was written by a German feminist, Gertrud von le Fort, who could see what was happening around her in the 1930's. The French Revolution didn't have a monopoly on mobs. The male principals too are relatively conventional parts, very solidly created. Gary Griffiths and Koji Terada alternate as the Marquis de la Force, Charlie Mellor and Paul Curievici as the Chevalier and Alberto Sousa sings the priest. Excellent

So pay attention to the role of Soeur Constance. She drives Blanche to distraction because she's so irrepressibly cheerful, but she is the one who intuits the meaning of Mme Croissy's death. Sophie Junker sings the part vivaciously, and Barlow directs her to leap and dance. Psychologically right, although Carmelites are a semi-silent order. Constance isn't a typical heroine, but she's so full of joie-de-vivre that the sacrifice the nuns will make is thrown into high perspective. Lovely ensemble singing and hymns.

Yet Dialogues des Carmélites, despite its religious subject, isn't as solemn as might seem. It's distinctively Poulenc, and Poulenc's sardonic. Blanche is devout but her music verges on deranged. The Prioress acts like she's older than Methuselah but she's only 59 (and Poulenc lets us know exactly how her life was divided). Her death scene's over the top, so it's almost funny how the nuns are shocked. Doubly ironic when you realize Poulenc's best friend was dying when he wrote this music. It's like whistling in the graveyard, overcoming fear by denying its power. Typical Poulenc irony.  Listen to some of the key wind parts, too, especialy the sour-sweet solos, and the raucous churning in the strings. Soeur Constance's lively spirit could come straight out of Banalités (which are anything but banal) or Les mamelles de Tirésias. Poulenc's elegant, ironic wit cannot be silenced any more than the nuns' faith can be supressed.  A more formal improved version of this will appear in Opera Today.

Very telling what you say about Stations of the Cross. Far too many people seem to think the opera is 'about' the French Revolution, or at least its impact upon religious orders, whereas it has always seemed to me to about divine grace, the Revolution merely providing the (admittedly extraordinary) setting.