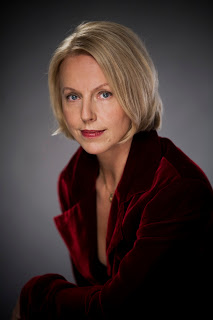 There was no way any performance of Mahler's Das Lied von der Erde with Claudio Abbado and the Berliner Philharmoniker would be anything but good. It was Mahler's Todestag after all,  everyone was reverent. But it exceeded all expectations because of Anne Sofie von Otter. She's by no means a typical Mahler singer, but that's exactly why she was so fantastic.

Scrap the clichés about how Der Abschied "should" be done: von Otter goes straight back to the score, and moreover to her soul, the source of real Mahler singing. Her voice is on the light side, so don't expect ultra-rich sumptuousness. There are different ways of expressing emotion. Von Otter's performance was wonderful because it was pure and direct. No diva-like affectations, no self-conscious playing to the audience. Such things impress, but ultimately they are ego trips for the singer, putting a barrier between listener and music. And Das Lied von der Erde, like so much Mahler, is about the sublimation of the ego.

Von Otter's interpretation highlighted Mahler, not herself. She's not as youthful as she was, but her voice is in excellent shape, enhanced by the depth emotional maturity can bring.  Complete technical control, firm tone, no wavering for adornment's sake.  Throught the text, there are references to lotuses and to ponds, which in China, almost always imply lotuses. These links are not superficial chinoiserie but fundamental to the whole meaning of this symphony. Lotuses are the symbol of purity becuase they rise upwards from murky depths. They look delicate but they're resilient. They survive and renew themselves year after year. Von Otter's singing has a pellucid quality that reminds me of the simple, unfussy purity of the lotus. She has grit and strength, but she projects legato so it expands with radiant lucidity. This is the essence of  O Schönheit! O ewigen Liebens.

Von Otter's clarity worked perfectly with the way Claudio Abbado conducted the Berliner Philharmoniker.  Can any other orchestra match the Berliners for lucidity and sheer finesse?  This was a performance that connected to the many images of darkness, contrasted with shimmering light in the text and in the music - mirror reflections, sparkling water, sunlight.... instruments reflected by others (flute/clarinet, violins/harp). Unmuddied, unsullied.  Even tutti moments were sharply outlined. Three mandolins, heard clearly and distinctly. And what lines - strutting, angular ostinato, not heavy handed but energetic.You could "see" the horses' muscles, and imagine the throbbing of a heartbeat, all references to a powerful life force.  Even more exquisite the surging, shimmering lines, rising ever upwards.  Combining Das Lied von der Erde with the Adagio from what would have been Mahler's Tenth Symphony enhanced both works. Shorn of the rest of the draft movements, the Adagio can be interpreted different ways, but Abbado and the Berliners know what was to come. Together, the two works are a hymn to life and the transcendence of death.  Hence, free-spirited exuberance rising from absolute technical refinement. Abbado looked even more haggard than usual, but even that added to the sense that this concert was a milestone experience.

Jonas Kauffmann, too, has matured. This performance showed him singing with much greater depth and gravitas than ever before. Das Trinklied vom Jammer der Erde isn't a drinking song. On the contrary, it's a savage, passionate protest against death and its curtailment of earthly happiness. Kaufmann spat out the lines about the ape on the tomb with appropriate violence. The image is horrific, especially for Chinese sensibilities. The ape represents the triumph of barbarism: apes aren't schön gekleidet and don't write verse or converse. Kaufmann's interpretation was flawless, impressively dignified. Unfortunately, his voice showd signs of strain, probably from having come fresh from a glorious Siegmund. But it didn't really matter if his top wasn't quite as smooth as it could be. Much better that he put his effort into emotional truth into what he was doing, singing meaning rather than surface beauty.

Although the live broadcast is over, the Berliner Philharmoniker will be archiving this concert, so it will be available online in the Digital Concert Hall. It was amazing, opening up new interpretive possibilties. Hearing it made me feel high, not on alcohol, but with the joy of life.  Please read my other posts on Mahler, Abbado, Das Lied von Der Erde and other related subjects.,. Lots on this site that's original, not seen anywhere else.
at May 19, 2011