The secret history of Sumer is icumen in 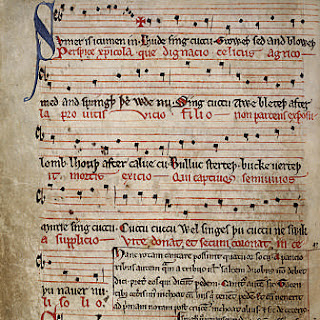 Sumer is icumen in is perhaps the earliest song preserved in manuscript.  It dates from about 1260 and is associated with Reading Abbey (founded 1120) which was destroyed in the Reformation and whose ruins are now a playground for drug addicts and drunks. Quite likely it was copied or transferred to the then brand new university at Oxford at an early stage. The manuscript is a compilation of various different pieces of music of which this is the only early English text. Interesting how even a thousand years ago, Europeans were sharing cultural artefacts. Sumer is icumen in is in the dialect of Wessex, a region stretching from the upper reaches of the Thames to the south coast.  Christianity came here in the mid 7th century, and with that monks, churches and literacy. Saxon churches still remain, oddly squat and simple, compared with later structures. Yet how imposing they must have looked once, rising above fields and woodland.

Sumer is icumen in in is a canon for four or more voices, lower voices interweaving with higher, a charming lilting sound. "Summer is a-coming in, loudly sing cuckoo ! "  And then, "The cow lows after the calf, The bullock stirs, the stag farts, Merrily sing, Cuckoo!" Bucolic medieval humour. Yet there are two texts, the red one in Latin, more conventionally pious and seeming to bear no reelation to the English text.  How were they meant to be interpreted?  Would performers and audiences be aware of both versions? Is the imagery quite as pure as it seems? William of Wycombe, one of the monks who made the compilation was later punished for "incontinence" or rather sex with a nun. That's to be expected, since the church was the only route to an education and a life less gruelling than farm labour or conscription. How much did the secular overlap with the sacred? How strictly were genres defined? Who would have sung this canon, and others, and when? In any case, at this time of year when the woods are bursting with bluebells, and the hedgerows fragrant with elder and cherry, Sumer is acumin in just seems so right.
at May 02, 2011