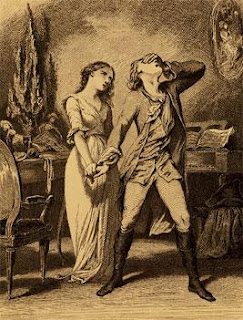 O Weh! O Weh! sighs Werther. If I can't get what I want, I'll kill myself and you'll be sorreeeee! What do you expect from wan young men is canary yellow pants? (grin). Goethe's Werther was the First Teenage Anti Hero in literature.  Werther is the archetype Romantic role model because he can't live embalmed in the social order, like Lotte does. In Goethe's time, suicide was treason in law and Mortal Sin in religion. Werther's way out was shockingly scandalous, and underlined the radical nature of his rebellion. He's spoiled, self-indulgent and can't understand Lotte's different priorities. And yet he's fascinating because he can feel with such extremes. He cares about emotions, and won't take restraint. By killing himself he thinks he'll stay pure to his ideals, uncorrupted by grubby mundane reality. Goethe's Werther and his Sorrows is the figurehead of the Romantic Movement, ushering in the modern age.

Massenet's Werther is Romantic too, though less wild. It starts tonight at the Royal Opera House, London. HERE is a download of the complete opera, from Opera Today. It's a historic performance form the Opéra Comique in Paris, 1931, with Georges Thill, Ninon Vallon and Elie Cohen conducting. FULL libretto too. It was added to the Opera Today database in 2005.
at May 05, 2011