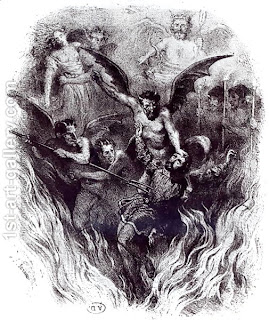 It's painful for me to write this.  Lord knows my tolerance for unorthodox productions is higher than most. I don't get off on orgies of hate so I don't enjoy panning - damning - a production like this. Much more important to me is trying to get what a director says, like it or not. I even saw the value of Mike Figgis's Lucrezia Borgia at ENO because he was bringing out the inherent difference between stylized period opera and modern film. But Terry Gilliam's The Damnation of Faust at ENO is so far removed from the original work that it is a joke. Maybe his fans will laugh but it's not a joke for those who like the music.

Gilliam's One Big Idea is that since the play is based on Goethe and set in Germany, it's a parable on Nazism. In principle, not a bad idea, but there is so much more to Faust and to 20th century Germany that it would take someone with real psychological and historical insight to develop it. Not Gilliam, though. This is about as perceptive as Basil Fawlty and his caricature Germans (and Spaniards). That was veiled racism and so is this.  It's not updating with a purpose. It's self-indulgent travesty, too clever by half. Maybe Gilliam in his Monty Python incarnation was funny. I'm sorry, but unfortunately for me, Nazism and  the Holocaust are not subjects  for cheap gags. The issues in Faust (and in history) are too important to be trivialized.  But senstivity and perception were hardly Monty Python values.

Faust (Peter Hoare) appears with a shock of upright orange hair. A jokey reference to Peter Sellars?  When people laugh at Sellars he can claim he's not being serious. Gilliam, however, takes himself very seriously indeed.  So many portentous references to German art and history. Mock Romantic landscape painting, cartoons of the First World War, George Grosz etchings, montages of Leni Reifenstahl movies, churned out as if they come from an illustrated short guide to Germany, written for children.  Instant recognition factors, no mental engagement needed, which is just as well as it fails close analysis.

Maybe the many silly images are supposed to be clever in a vaguely witty way. Marguerite gets up to something on a rock like Brünnhilde and Faust does an impression of Siegfried. Maybe this shows how Gilliam "likes opera" as he said in a recent interview, but the connection between the Ring and Faust is much more complex. In any case here it's done without context, like a silly skit that raises a laugh but it says nothing. Lots of Monty Python in-jokes too, like the "flying white scarf" Faust wears when he and Mephistopheles speed off in their motorcycle and sidecar. Perhaps some will delight in a Jewish Marguerite, lighting a menorah, while stripping, swapping wigs and lusting for a Brownshirt. The limits of taste are pushed back but so are the limits of artistic logic.

Christine Rice sang Marguerite  beautifully. Her voice has developed a distinct personality. She's wasted in this demeaning production and deserves better. Momentary lapses in some other members of the cast, partly because the translation is clumsy and strains the legato. This time, jokes in translation would have helped immensely to lighten the mood. But then the whole production was a joke because it was so self-consciously full of itself.  Christopher Purves's Mephistopheles was impressive - the part is a gift for a singer who can act.  The skits about the Rat and the Flea were succinctly done, Nicholas Folwell's Brander is a delight.. In this scene, Goethe and Berlioz are deliberately subverting the narrative with wit and humour. Ironically this is the one scene where Gilliam lets the action unfold without irony.

Berlioz's The Damnation of Faust is not an opera at all but a series of vignettes for orchestra, chorus and soloists, hence the long orchestral interludes, filled with ballet to please audiences at the Opéra-Comique in 1846. In a modern production they'd be an ideal place to insert truly witty choreography. Not in this production though.  In a concert performance, you luxuriate in the music. The temptation in staged performance is to do too much, which overwhelms rather than enhances. Fortunately, however, Berlioz's faith in the ability of the orchestra to tell the story was well founded.  No need for gimmicks. Wonderfully dramatic passages, full of brio and inherent colour. Edward Gardner and the ENO Orchestra were brilliant. I was surprised how idiomatic the playing was, adding much needed punch to the emotionally flaccid direction.

Because it upsets me to diss a production so many good people have put a lot of work into, i'm going to reflect before writing my final, proper review.  Maybe what I'll do is genuine praise for the good aspects of this production - wonderful orchestra, very good singing (especially Christine Rice). But even faint praise for the production would be unfair to the music. Nonetheless, this production could well be a huge hit because it's so mind-numbingly shallow. Mass appeal for the Monty Python audience who thought a large boot landing from the sky was funny. The real losers are those who like Berlioz (and Goethe). Please see my other related posts - complete download of the full Murnau Faust movie, complete download of a recording with Nicolai Gedda, and a link to the review of the Gilliam "car crash", more analytical and incisive than I could dream of writing.  This production is fine if you like Monty Python but it's the ultimate in so called Regie where a director could not care less what he's saying as long as it looks nice. Please see my numerous connected posts on Berlioz, Weimar. Faust, Goethe and the Holocaust etc.  A more deetailed analysis will follow.
at May 07, 2011

How I agree. I kept thinking of Spring Time for Hitler.

Thanks John, I need a bit of support. I thought of Springtime for Hitler too but Mel Brooks injected savage irony into what he did.