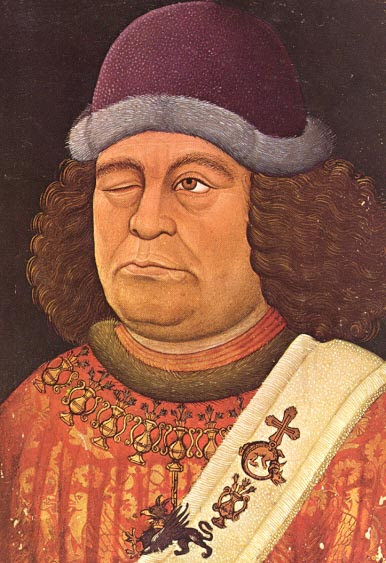 Oswald von Wolkenstein (1366-1445) and the 60's hippie/ C&W hit? Remember the refrain "I'm a man of means, by no means, King of the Road? Oswald was born into the aristocracy, but not firstborn, so as a young boy he took to the road as men did then, travelling with other dispossessed knights, troubadours  and guns for hire (were there guns, and not lances and swords). Sometimes they'd be mercenaries, sometimes poets, but they wandered around Europe without borders, "looking for adventure" as rock stars might say.

"I have been in warm and cold places, in misery and poverty, bei cristen, Kreichen, haiden" (Christians, Orthodox and heathens) He describes how he lived by his wits in ten languages in two long monologues Es fügt sich (It happened). Along the way he got religion, became a monk, got married and had numerous sexual relationships. In that order and otherwise.

Wolkenstein was no fool. Unusually among the poet/musicians of his age, he kept manuscripts, so we can hear his work today and get a glimpse into medieval life that wasn't cleaned up by Church or State. There's a wonderful new CD out now, of Wolkenstein's songs, with Andreas Scholl and Shield of Harmony, 14th century period specialists. It's called "Songs of Myself" because Oswald von Wolkenstein was singing about himself from first-person experience. But there's also wider meaning. The recording was made live in the tiny St Valentinuskirche, Kiedrich, in Hesse. Wolkenstein certainly travelled in the vicinity, thougfh it's not known if he visited the church. It's now the only place in the world where plainchant is still sung in "Mainz dialect".

But the small church is central to the life of Andreas Scholl. This is where he first started singing, as a choirboy aged 7, just as generations of his family had done before him. He went on, like Wolkenstein, to find fame and fortune in the wider world, but Kiedrich is his grounding place. The CD is dedicated to the memory of his sister, one of the few choirgirls at the time, who died too young, and to his father who died two years before the recording was made.  Scholl is sublime almost without exception, but on this disc  he's singing with even more intensity than usual; he knows the significance of the performance. Heartfelt sincerity and tenderness, as if he's distilling the experience of generations of Kiedrichers over the centuries. This CD is unique because it's so personal, and so moving.

I won't write about the songs as it's repertoire I know nothing about and can't fake. But listen to this, even if you wouldn't normally dream of listening to the genre. I love this recording because it's beautiful and timeless. I can imagine sitting in darkness, the thick stone walls staying cold even when its hot outside, and thinking of the invisible thousands who've passed through before. Wolkenstein would probably feel quite at home in the modern world. With this disc, we can feel at home in his.