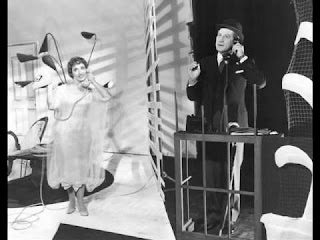 This year's Wexford Opera Festival brings The Telephone by Gian Carlo Menotti. It's a scream! A man wants to propose to his girlfriend, but she's so busy talking on the phone he can't get a word in. Finally he phones her but she still doesn't get it.  Though the opera was written in 1947, telephone OCD is probably even more extreme in the Age of Twitter. Sure beats real life communication! When this pair marry will they tweet in bed? The ultimate in safe sex.

The Telephone or "L'amour á trois" is very fast paced and quite a test for the soprano who has to carry the whole one act opera on her own. She has to be a brittle bimbette while conveying the insanity beneath the charm. It's a wonderful short opera but the role is taxing, which is why it's not performed as often as it should be. Wexford is pairing it with Leonard Bernstein's Trouble in Tahiti, another observation on Perfect but Pathological.

The three main operas at Wexford this year are even rarer. La cour de Célimène by Ambroise Thomas, of Mignon and Hamlet fame. "The neglect of La cour de Célimène......is difficult to understand", says the Wexford press office, "for it is generously endowed in every important area: attractive music, interesting orchestration, good ensemble writing, spectacular vocal solos, drama and duels, a clever and witty plot." Sounds like another vehicle for a soprano who can act as well as sing. Célimène is a widow who manipulates men. There is a CD from Opera Rara but the conductor is Andrew Litton and Célimène is Laura Claycomb.  Joan Rodgers, too, though.

Donizetti's Gianni di Parigi predicates on arranged marriage, and Roman Statkowski's Maria (1903-4) adds murder to the mess. It's based on an 1825 epic poem by Antoni Malczewski. Given the period in which the opera was written, one supposes Russian and Wagnerian influences. Booking starts today for Wexford Opera's 2011 season. For more, visit their website.

Email ThisBlogThis!Share to TwitterShare to FacebookShare to Pinterest
Labels: Wexford