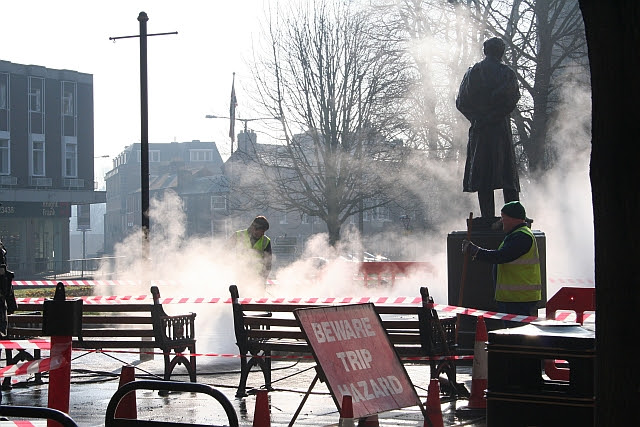 My review of Elgar Caractacus at Worcester 3 Choirs is here. "Beware trip hazard!" What a fantastic photo! (Bob Embleton) It's Elgar, his statue in Worcester, surveying the city being cleaned. But hazard a trip to this year's Three Choirs Festival. Although Worcester is only 90 minutes by car from Oxford and 3 hours plus from London by car, taking the train and staying overnight is a good option, because you get into the more relaxed vibe of the Cotswolds.

The Three Choirs Festival isn't London, "the town built ill" as Housman wrote.  This part of the Cotswolds, "the quietest under the sun", has been prosperous since the Middle Ages, which is why there are three grand cathedrals  fairly close to each other, supporting a large community of singers. The Three Choirs Festival started 300 years ago so the choirs could get together and have what is essentially a mass party, everyone celebrating with song and goodwill.  There's nothing quite like it anywhere else in the world.  It operates in a kind of time warp with its own values. From an anthropological perspective, that's fascinating  I've written a lot about the Three Choirs mystique before (use search button or labels at right and below). It's wonderful because it's not glitzy and trendy.

Three Choirs 2011 features a lot that can be heard in London, but will sound different in Worcester's very non-London atmosphere.  For completely emotional reasons, Elgar always feels right in these surroundings  This year's Big Event is Elgar's Caractacus on August 10th. For my detailed review please see here.  Caractacus was an ancient Briton who held out against the Romans. Legend has it he was finally captured in the Malvern Hills, hence the romantic connotations. Taken as a prisoner to Rome he defied the sophisticates at court and impressed the Emperor. Caractacus was a wild man more used to tents and the open air than Roman palaces, so perhaps when Londoners descend on Worcester, they might remember that there is another England.  Sir Andrew Davis conducts the (London based) Philharmonia, good singers. Elgar's Caractacus isn't ultra familiar, so Paul Spicer is giving a talk, titled "There are Druids in the Malverns". He's a charismatic speaker and really knows his material, so get there if you can.  The Elgar Society lunch is also on the same day, which is convenient. (AND you can hear Alison Balsom's trumpet recital.)

Another interesting concert will be "English Exiles" at Tewksebury Abbey on 8th August, featuring music by British composers forced by the religious struggles of the 17th century to work abroad. That same evening, back in Worcester, Mahler's Third Symphony which has been heard so often in London that we might get blasé. Here though, it's the Philharmonia, conducted by Susanna Mälkki, who is so good that even jaded Londoners might want this one. It won't be boring.  The soloist is Catherine Wyn-Rogers and the choirs come from the combined Three Choirs Chorus. It's followed by a late night concert by the Lay Clerks. Although I've never been to these concerts, they're supposed to be a lot of fun and are a regular fixture.

Worcester and Elgar are inextricably entwined, so there are other Elgar events planned. Dame Janet Baker is speaking at the Three Choirs Society Lunch (members only) and there are tours to Elgar's birthplace at Broadheath (which I've also written about ). It's a place of pilgrimage which you "need" to go to when the Festival is in Worcester.  Plays too, Hamlet and one about Alice and Elgar. Talks, walks and recitals.  Since cathedrals and organs are even more inextricably linked than Elgar and Worcester, you'd be mad to miss organ concerts at this Festival, which attracts organists from all over the country. There's even a transcription of Elgar's Second Symphony for organ, by David Briggs, after the bigger profile but more straightforward Harry Christophers The Sixteen on 9th August. Massive programme, and it is also being broadcast by BBC Radio 3 in September. .For more, please visit the Three Choirs website.
at May 14, 2011