Nazi Imagery, why and why not 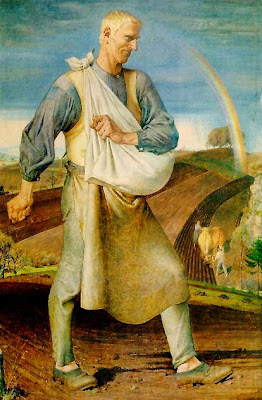 Twenty years ago, the Hayward Gallery showed an exhibtion from Germany on "Romantic Art". The usual suspects, of course, but then something quite shocking - paintings from the Nazi period, such as this, The Sower (1937) by Oskar Martin-Amorbach (1897-1987). Ostensibly it's vaguely folksy, like a faux medieval illumination, to appeal to the regressive tastes of the time. But look carefully. The fields are angular, Cézanne translated into art deco. The farmer is supposed to be hardy and wizened but there's a crazy look in his eye. (click photo to enlarge) What kind of seed is he really planting, I wondered, what is the painter trying to say ?

In societies like Fascist Italy, Soviet Russia and indeed Nazi Germany, modernism wasn't extinguished but adapted. But because art had to serve political purposes, public art had to be simplistic. It was advertising, after all.  Don't think, was the message, just act ! Which is why, ironically, there's hardly any stylistic difference between public art of the Right and the Left. The images are the same, just change the labels. This appeal to mindlessness is perhaps why Nazi imagery appeals to so many. Automatic clichés are easier to fall back on than real analysis or understanding. This shallow comic book mentality is dangerous because it replicates exactly the mindset behind totalitarianism. Using Nazi and other didactic imagery is OK when it's used for a specific purpose, such as to provoke thought. Nazi imagery as fashion statement is obscene, the fallback of a lazy mind. And it's lazy minds that swallow slogans and let totalitarianism reign. Nothing to be complacent about.

Today I've been thinking about Mel Brooks The Producers. It's a brilliant movie, even though it looks very much of its time (1968) but it was so topical that it was hilarious. The whole movie is a savage commentary on society. Two con men want to scam investors by making the worst possible movie, so they can run off with the money. So they get the worst possible performers and the worst possible storyline, Springtime For Hitler. Extreme kitsch crassness, designed to be ridiculous. Yet audiences fall for it and the show becomes a hit. Mel Brooks and his team used comedy to make serious observations. The Producers shows how easy it is to fool the gullible. Give 'em a song and a dance and they'll march in step to anyone. Even the conmen were outclassed.  Here's a link to an article about modernism in totalitarian art by Roger Griffin in 2007.