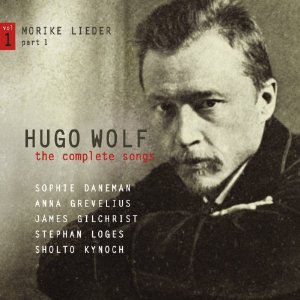 Hugo Wolf's songs to poems by Eduard Mörike are perhaps the most exquisite Lieder ever written. The songs flowed from Wolf's pen as if divinely inspired. Maybe they were, for they express the spirit of the poems so perfectly, it's almost as if they wrote themselves. Sometimes Wolf would write several in a day, intoxicated by their beauty.

This latest CD from small, independent label Stone Records  is the first in what will eventually be the first complete collection of Wolf's songs by a single group of performers. It will be a monumental undertaking, spread over 11 or 12 discs. There are more than 50 Mörike settings alone, and the range is so wide that one singer can't do them equal justice. Besides, hearing them performed together is a unique experience. This recording was made live at the Holywell Music Room in October 2010 as part of the Oxford Lieder Festival. The disc captures the spontaneous immediacy of live performance. One singer per song, of course, but such a sense of ensemble. These performers are listening to each other avidly, projecting and expecting a response from one another. It's hard to quantify precisely why this feels so vivid, but it feels right, as if we're listening to a group of friends at an early Wolfverein recital.

Perhaps it's because all these performers have worked together for years and have an established rapport. Sophie Daneman, Anna Grevelius, James Gilchrist and Stephan Loges, with pianist Sholto Kynoch, interact intuitively, so the recital flows seamlessly. They're clearly getting pleasure from being together, and the sense of ensemble comes over nicely.  The balance of four different voice types adds extra variety and adds to the charm. Chamber quartet in voice!

The sum of this performance is greater than its parts alone. Obviously, this set won't replace Schwarzkopf or Fischer-Dieskau or most of the really huge names that have done these songs before, but it's rewarding because it feels so personal.  This makes it special, and recommended for anyone who wants to know how live performance differs, even on recording, to studio work. This matters especially as Mörike was a poet for whom privacy was a statement of faith. He became a country prelate so he didn't have to work hard but could spend his time contemplating wild flowers and feeling the sunshine on his back. He believed in earth spirits and the supernatural. Not a man for whom the public sphere held  much attraction. Perhaps Wolf identified so closely with him because he, too, valued friendship and stillness. Both Mörike and Wolf were depressive. Perhaps they were aware that the "real" world isn't a nice place.

I confess a vested interest. I've long been associated with Oxford Lieder and contributed towards making this recording possible. Can't hide if my name's in the booklet!  On the other hand, I wouldn't be in that position if I hadn't spent a lifetime listening to Lieder and to Wolf. So I can sincerely recommend this recording. The ensemble atmosphere is so good that it will be a long time before this disc is surpassed in that sense. It is excellent, too, as an introduction to Wolf and to Mörike, because it enters into the inner world that inspired them better than more formal, technically sophisticated and "knowing" performances.

Please see my review of Stone Records Hugo Wolf Songs vol 4 - the early songs, Keller, Fallersleben, Ibsen and others, It's a must for serious Wolf lovers as rarities are conveniently collected together. I've also explained the arc of the set.
at May 18, 2011