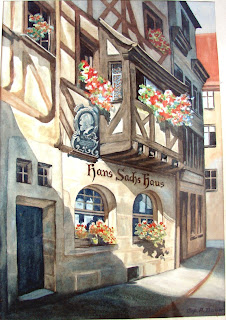 Thinking further about Wagner Die Meistersinger von Nürnberg at Glyndebourne I was struck by how well Vladimir Jurowski's approach worked in context.  Glyndebourne is set in glorious gardens, with a lake, woods - and a huge meadow. It feels like a place of pilgrimage because it's the oldest and grandest (so far) summer opera festival. People go back year after year to because it's more than opera, it's also social. Isn't that a lot like Act Three, where the townsfolk leave the warren of the city behind and celebrate in the open air? And one of the fundamental themes of the opera - renewal, regrowth, non-urban values.

There's always something new to discover in truly great music. Someone else's interpretation might just bring out levels you hadn't thought about. Jurowski's Meistersinger emphasized the spirit of freedom and openness that is so central to the opera. It connected to the Glyndebourne ethos, with a cheeky wink at status and pretension. Wagner's proto-socialist politics would jar in this context, but it still packs a punch when it's done with a subtle touch. Besides, stupidity afflicts all classes, not just the rich, as the opera shows.

Jurowski and the LPO brought out the energy in  the music, so it felt breezy and energetic - truly the spirit of summer and regrowth. Wagner isn't done at Glyndebourne because the hall is too small. (Tristan und Isolde is an exception because it revolves around two main characters.) Bombast would overwhelm, and emphasise the very aspects of status and display Wagner is seeking to undermine. So Jurowski turns negative to positive, with an unsually bright, lively interpretation that accesses the soul of the opera more perceptively than the image of Bayreuth 1943 that seems imprinted on many people's minds.

David McVicar's staging is woefully dull and bears little relationship to the opera. It dragged so much that it would be easy to assume it was the fault of the music. But no! Jurowski and the LPO played with alert vigour. The music around the apprentices is supposed to burst with rustic quaintness, even suppressed violence. Hence the angular rhythms, which Jurowskiu shaped well.

Again and again, we fall into the trap of listening through a narrow prism, basing observations on what we're used to, not on what is actually happening in a performance. But no artist is an artist if he/she doesn't find something personal and original.  Always, I think, base observations on the score, separate from performance practice. We have a choice. Walther isn't full formed. But do we listen as Beckmesser or as Sachs?

HERE is a link to the review in Opera Today. The picture above also contradicts kneejerk thinking. It's a watercolour by Rudolf Bauer (1889-1953), an exact contemporary of Hitler. Bauer was involved with Kandinsky, Franz Marc, Chagall and the Die Sturm group. The picture at first looks traditional, but it's influenced by late art deco, and  more modern values of light and energy. It's not "degenerate" modernism - Nazxis might happily have had this on their walls. In real life, Bauer's friends were Jewish and/or politically suspect. He was imprisoned by the Gestapo. But part of the reason he's forgotten today might be because he was naive in business.
at May 25, 2011