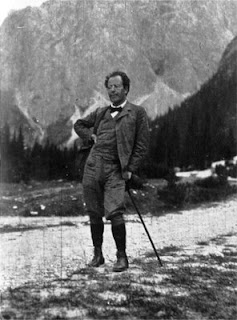 Today is the 100th anniversary of Gustav Mahler's death.  Last night I read the relevant passages in Henri-Louis de La Grange's monumental biography, depicting the composer's journey home to Vienna. Although I've read those pages many times before, they're still powerfully moving. Had penicillin existed then Mahler might have lived another 40 years. What might have happened? On the other hand, we know what happened to many he knew. De la Grange's biography shows how Mahler's mind was vital and creative. He wasn't death obsessed as the myths would have it, but lively, inquisitive, intellectually alert. He thought a lot about death, but as the negation of life, rather than as a fetish in itself. That, for me, is why Mahler's music is so endlessly uplifting. It stimulates the spirit to rise ever upwards and explore new horizons.

Many years ago my small son had just learned to read, and voraciously absorbed everything he saw. Propped against my record player was an LP of Mahler with the dates 1860-1911. My son didn't know about dates and thought the numbers were a math problem. "How can a smaller number minus a big one?" he asked.  So I explained what the numbers meant. To a kid, even the measurement oif time is a new concept. The little lad sat intently listening to the music though he was only four. Then he breathed a heartfelt sigh. "What a pity Mahler is dead ! He writes such neat music!"
at May 18, 2011

Email ThisBlogThis!Share to TwitterShare to FacebookShare to Pinterest
Labels: mahler

BBC World Service here. Would you be available for an interview on Gustav Mahler today - around 1:30pm? If you are available - please call 0207 557 0024 or email emma.wilson@bbc.co.uk as soon as possible. Thank you.