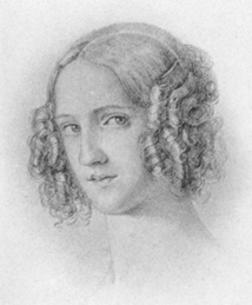 Bluebell Klean, Ella Mary Leather, Olga Samaroff, Josephine Lang, Ida von Hahn-Hahn.... what names! Who could they have been?  Names like that conjure up colourful connotations. The latest edition of Signature, the Maud Powell Society's magazine, is now out. Download it HERE (and also back issues). Do explore, because it's about singular, often courageous people who had interesting lives even if they aren't household names. We don't even begin to appreciate what women have achieved because we're brainwashed by clichéd assumptions about what women could or couldn't do in the past.  Because society teaches us to evaluate things in male terms, we evaluate male composers primarily by their formal achievements. Thus we underestimate the extent to which female composers were productive in several different aspects of life at the same time.

Josephine Lang is a perfect example of a woman whose creativity was expressed in different directions. She raised a large family in difficult circumstances while continuing to write good music. Having a family is a vocation even if it's not regarded in modern terms as a "career". For Lang, family wasn't an optional either/or, it was part of who she was. The definitive biography by Harald and Sharon Krebs,  comes with a full CD of her music. Malcolm Martineau included Lang's songs in his current series on German song at the Wigmore Hall. In this current edition of Signature, Sharon Krebs writes about Lang's relationships with the poets whose music she set. Some of them were personal friends, women like Ida von Hahn-Hahn, who led similarly muti-tasking lives as she did. She networked. She wasn't "suppressed".  One of the interesting things about Lang is her relationship with Felix Mendelssohn, who mentored her. This supplements R Larry Todd's authoritative study of Fanny Mendelssohn Hensel. I admire Josephine Lang (and Fanny Hensel) because their creativity was channeled through more than one course. Read the article on Lang and her poets in Signature, it's fascinating. (scroll to page 18 onn the download).

Similarly, Bluebell Klean, who adopted her unusual first name herself. She was a composer and pianist who gave a concert of her own music at the Bechstein Room in 1906, now renamed the Wigmore Hall. Programmes remain of other concerts of her work until 1914, after which she seems to disappear from the archives. But she didn't retreat from life. There's a wonderful photo from a 1924 newspaper where she's grinning next to a huge fish. Champion angler, winning a competition out of a field of 300!

Also in this current issue is an article on Olga Samaroff,  aka Mrs Leopold Stokowski, but a most distinctive personality in her own right. Her "Russian" name was an invention, adopted to sound exotic and more marketable. She came from Texas and was a charismatic teacher.  Also articles on Myra Hess in the US, Meira Warschauer and  Elinor Remick Warren, who looks the spitting image of the actress Lee Remick. Are they related ? If so, creative women in several generations.

Ella Mary Leather? She appears in a back issue of Signature but what a name!  She was a county matron from the shires who spent her life doing good deeds for others, a pillar of her community which is no bad thing at all. Yet she also researched folk customs and music in her local area. Raplh Vaughan Williams and George Butterworth awere indebted to her. Cecil Sharp eventually monopolized the folk song and dance scene, so the women who were so active in the field were eventually written out of the record. But they were there ! And it's thanks to magazines like Signature that they won't be forgotten.
at May 11, 2011

We have further details of Bluebell Klean