Conductor who hates Bach and Beethoven 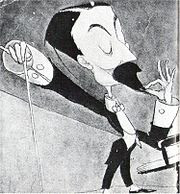 What would you say about a conductor who declares "Bach ("too much counterpoint - and what is worse, Protestant counterpoint"), Beethoven ("a tub-thumper") or Brahms ("that old bore"), and prefers Haydn, Berlioz, Schubert, Delius, Richard Strauss, Wagner, Sibelius, and Mozart ? Especially when the comments were made when Richard Strauss was new music and Berlioz not quite in fashion. No chance this conductor would have stood for historically informed performance.  A modern conductor couldn't get away with comments like that. Imagine the screams of derision from some internet discussion groups. But Sir Thomas Beecham could get away with it. That says something about his time and ours. It seems like a different century, (which it was), though he died only 50 years ago. Catch the BBC Radio 3 special HERE online til Monday.
at May 03, 2011

Thanks so much for showing us this! It's really superb and it's especially fantastic to hear what David Cairns has to say!