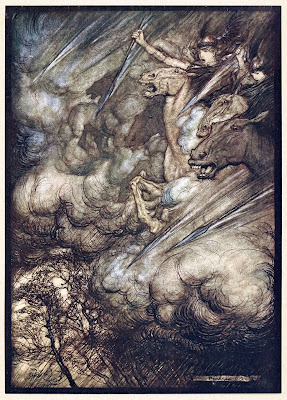 What to make of the Met's Wagner Die Walküre? Brilliant First Act, so powerful it seemed like the whole Met ethos had been transformed. Das Rheingold was much derided because Robert Lepage's Big Machine took the spotlight. But in many ways, Das Rheingold failed because the singing, costumes and direction were sub-standard. The machine was a scapegoat. This Die Walküre indicates that it's been vindicated. The fault lies not with the set but the way it's used.

Stormy skies, a dense forest. Small figures appear in the cracks that open when the machine slats open. The Machine isn't a monolith - that in itself is an insight. So oppressive is this "forest" that when Siegmund collapses it feels like he's genuinely been through an overwhelming struggle. Jonas Kaufmann is amazing. I'd worried that his most perfect Lohengrin might not translate into wildman Siegmund, but Kaufmann characterizes so well that he's expanded the role beyond all expectations.

Siegmund is unlettered but not uncouth. Kaufmann's Siegmund bristles with intensity and intelligence. In the context of the whole Ring saga, it's a relatively small part, but Kaufmann shows why it's so critically important in the wider scheme of things. This is Siegmund as  a true hero, one for whom even a Valkyrie will challenge the Gods. As Wehwalt he suffered, but also helped others when he could. Siegfried in comparison can be a bit of a boor. As his Siegmund dies, Kaufmann raises his hand to caress Wotan's face. It's incredibly poignant and moving, intensely evocative.The role sits slightly high for his voice, so there's some strain, such as the sudden, tricky leap upwards on "Geliebter" after the quiet "Schwester". But many have been far worse. What counts is the overall portrayal : Kaufmann sets new standards.

Eva-Maria Westbroek was an excellent foil. She coils around Kaufmann's Siegmund so well that they really do seem like twin serpents.Westbroek isn't a typical "pretty" soprano but a good character singer who can bring edgy depth  to what she does. There's more to Sieglinde than doormat. I loved Westbroek's punk Elektra in Zurich, and her fiesty, sexual Elisabeth in Tannhäuser. Neither role a conventional interpretation, but perfectly valid in context.

Bryn Terfel coasted through the Met's recent Das Rheingold. He was right. Why should he bother when no-one else was even trying? Maybe this time a stronger international cast upped the stakes. Terfel responded.  Terfel's voice is so huge it impresses even when he's more into bark than bite, but here he was throwing himself into character, breathing into words so they came alive. Nuance and Terfel don't necessarily come together, but in this Wotan, Terfel brings out the insecurity at the heart of the role. Wotan wanders because he's searching for something he doesn't have. A paradigm for modern man perhaps, which makes the role so resonant. Exquisitely well balanced, thoughtful monologue in Act Two. Terfel cultivates a gruff persona for his public, but inside there's a sensitive artistic soul that needs to get out more.

Fricka on the other hand represents uncompromising moral absolutes. Stephanie Blythe sang with more gravitas and depth than she's done in years, but the ludicrous costume and throne destoyed her credibility. She's turned into the Queen in Disney's Snow White. It's a warning sign of the silliness that will eventually submerge this otherwise brilliant production. The real damage starts when Brünnhilde enters.

Deborah Voigt is an insider at the Met, so an obvious choice for a high profile production but Brünnhilde really isn't the role for her. I've rarely seen such a one-dimensional performance.Vocally, she's under pressure, so thin at the top she's almost shrill. But far more worrying is the characterization, or lack thereof.  It's as if the insight that went into directing the first two acts suddenly disintegrated.

Any Ring cycle predicates on Brünnhilde, for she is the real hero of the whole cycle. Brünnhilde is the real hero of the Ring because she's the one who breaks its curse. She's a formidably original personality who breaks rules.  Long before the opera begins. she's established her credentials. That's why she's Wotan's pet, for she's smarter than he is. Instead, Voigt simpers, pouts and acts coy like she's exceedingly pleased with herself.  There can be many ways to create Brünnhilde but this one goes against everything we can glean from the text, music and what we know of Wagner's philosophy. Whoever directed Voigt this way does extreme harm. If this is what the role is like at this stage in the saga, what will be be when it proceeds further?

Even Francis Ford Coppola realized how traumatic the Ride of the Valkyries should be. It's an apocalyptic nightmare, where warriors feud even after they're dead. Wagner's music is powerful because the Ride shows where greed leads.  So what do we get from the Met? Jolly cheerleaders in comic book costumes collecting neat plastic bones in gauze bundles. No matter how spirited the playing from the pit, the whole impact of the Ring is rendered trivial.  The production started out so well, so when it ends a mess, it's heartbreaking.

The wonderful first two acts of Die Walküre  prove that this new Ring has the potential to become one of the great classics. So why did it go so horribly wrong in  the Third Act? Were there two completely different directors, or did the Third Act die stillborn in embryo form?   So much has been invested in this project that it's hard to believe it's being left half finished. Perhaps it's a Lepage thing tio run out of steam but too many people were involved in this to make it a one-person show. What is really going on behind the scenes at the Met? Don't they want a good production to replace the last? The disparity between the two different approaches is so extreme it feels like an act of artistic sabotage, suicide or schizophrenia.

Blaming the Big Machine is a non-starter now that we've seen how good this production can be. Because the machine can undulate and contort, it's potential is huge, used imaginatively. At one point in the Second Act, the machine undulated, as if the ground underfoot was falling apart. Ominous flashes of red light, as if lava was about to spew forth. What a fantastic simile for the twisted moral ground in the plot! But the idea fades and instead we have safe, boring and bland. Let's hope Lepage and/or  the Met decide what they really want to do with this Ring. Whatever Wagner may be, he's not safe, boring or bland.
at May 16, 2011

Someone pointed out that a large problem with Voigt's portrayal might be due to Botox injections on the forehead... I can't verify if it's true, but I can see exactly what they meant. And if that forehead moved, more of her pouting in Act II might have made sense.

That said, it was worth it for Kaufmann/Westbroek. Unfortunately, I couldn't tell enough about Terfel's Wotan through all the extreme close-ups.

I have to disagree with your read of Act 3. The Ride is full of energy and high spirits of the 8 manic Walkure's. Coppola's version is a very partial rendering. Listen to the words of glee in the Walkures.

The transition to Wotan's anger and then to the farewell and magic fire were moving and engaging for me.

Seeing the production both at the Met and on HD, I found Act 3 the most impressive. (I have seen Walkure 8 times, six in the context of the whole Ring at the Met, Covent Garden,and Bayreuth). In some ways this was the best I've seen.

I do think, though, that there are questions about Voigt. There have been some less than heroic Brunnhildes of note, Behrens and Evans come to mind, but I wonder about Voigt n Gotterdammerung especially.

But a Ring production matures and evolves. I am interested in how the production engages with our contemporary world of technology and human need.

"Advanced" technology is all very well but asking the 8 Valkyre to risk their lives and at the same time sing in unison is asking a bit much. A plank is not a horse and a horse is not a plank. Are the producers/directors stark staring mad?

Stupid and mad in this case, I think, Arnold. Wagner wants weild things like swimming Rheinmaidens and dragons, but this staging was comic book.