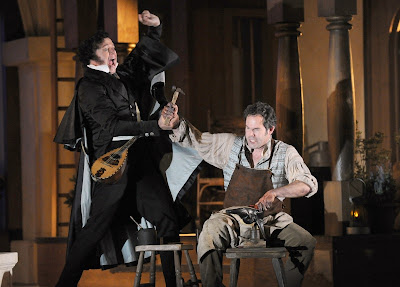 Glorious sunshine at Glyndebourne for Richard Wagner's Die Meistersinger von Nürnberg on the eve of his birthday. The action in this opera takes place on Hans Sach's nameday, which carries huge signifigance. This opera revolves around Sachs and his views on justice and above all Art. Sachs is a cobbler, who sees all men's shoes - the ultimate leveller. He doesn't judge people by status or background but by who they are. He can spot Walther von Stoltzing's true nobility when the Meistersingers ridicule him as an outsider. And that nobility comes from Art.

Hans Sachs isn't fictive invention. He was a real person who lived at a time when Germany was rent apart by religious struggle. Nuremberg was an island of Protestantism in the sea of Catholic Bavaria.  "Heilige Deutsche Kunst" refers quite specifically to the concept of emerging German identity which started with the translation of the Bible into the vernacular and the Reformation. "Should the Holy Roman Empire end", sing the locals, "German values won't end".  Just as Sachs and his peers rejected Rome and what it stood for, Wagner was turning from French and Italian opera, to create anew. So anyone who insists Die Meistersinger  must be Nazi is a fool, who's spent too much time on Monty Python and none on Wagner.

That said, Die Meistersinger is comic, but not comedy. It's subversive. Beckmesser is the Town Clerk, thus symbol of the Establishment and civic status. That's why Pogner's happy to marry his daughter off, and why the Meistersingers obey him when he ridicules Walther, who lives for pure art, which he's learned from nature.  Sachs opposes mob thinking, whether the mob are his fellow Meistersingers, or the townsfolk, fighting mindlessly in the streets. He protects Walther by giving him a chance to express his true talent. Just as Sachs doesn't march to anyone's tune, neither will Walther. If Hitler had had any inkling of what Die Meistersinger really is about, he might not have been quite such a fan.

This production (David McVicar, director,  Vicki Mortimer, designer) is joyful and exuberant. The apprentices are wonderfully energetic and "rude" in the best sense of the word. They leap and dance with the precision of workmen who are mastering their craft. They're the future, just as Walther is. Topi Lehtipuu's David sings with vigour, giving greater depth to the role than it sometimes gets. He acts like he's put upon, but he's a strong personality. Sachs would hardly take on a stupid apprentice, nor promote him to Gesellen. Lehtipuu's David is convincingly the next Sachs in embryo. 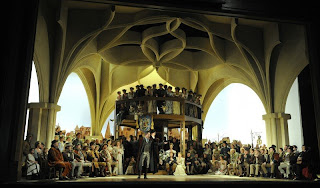 But why update to the early 19th century? Perhaps McVicar's making a connection to Beethoven and Goethe, but the connection is remote and adds nothing. Act One is dominated by a huge fan-vaulted ceiling. Perhaps Walther and Eva meet in church, but it's a major misreading of the opera. If anything, this is an opera about the freshness of nature, which is why the tree in the town square and the meadow play an important part. Nuremberg in Sachs's time was a warren, where the community lived in claustrophobic proximity. This elaborate ceiling means that Sachs's workshop becomes something decidedly upper class. which destroys the idea of Sachs as a humble man of the people, who is elevated by his art. Wagner sent the Town Clerk into the cobbler's workshop to show up the contrast in their status. 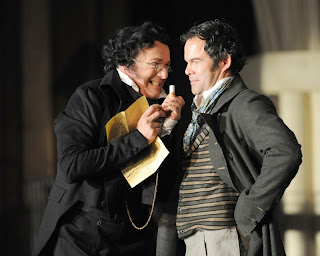 Hans Sachs isn't a role one might associate with Gerald Finley, so there's no point in comparing him to some of the iconic Sachs's of the past. Finley's voice is in reasonably good shape, so his Sachs is a refined, understated characterization. It emphasizes the poet in Sachs more than the cobbler, but it works well enough. Finley is convincing in the long monologue. Wahn, Wahn, überall Wahn is a sentiment anyone can identify with, whatever the context.

Johannes Martin Kränzle is an effective Sixtus Beckmesser. He's the most elegant man in town, who's always got up in finery, unlike the locals who save it for festive occasions. The part could use more malice, but Kränzle spinned out the curling lines sinuously and moved like a viper. At the end, when he played his lute like an air guitar, it was hilarious. Anna Gabler sang Eva as a charming ingénue, at her best in the final scene where she at last can openly declare her love. The quintet was fabulous, the three central figures haloed by the two lesser roles. 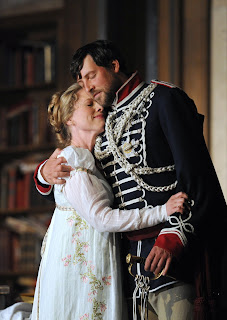 Marco Jentzsch's Walther von Stoltzing was extremely impressive. This is a singer to watch as we desperately need new Heldentenors, or at least tenors with good range and dramatic stage presence. Jentzch is tall and handsome, which helps, but his singing is his greatest asset. The voice is warm but authoritative, and he uses it with intelligent expressiveness. This was Prize Song to cherish, beautifully fresh and pure, yet tinged with committment.  For someone relatively young, he's mature. Walther, after all, is an independent spirit who even when he wins, doesn't want to join a group. "Nein, Meister, nein !" While he looked dazzling in his Hussar costume, it was an interpretive mistake, since Wallther is a ronin, a leaderless wanderer who doen't do status or adhere to outward form. Jentzsch is so good, however, that you focus on the singing, not the suit.

The very idea of  Die Meistersinger von Nürnberg at Glyndebourne breaks the mould, too. In theory, it's too big for a 1,100 seat hall, but Vladimir Jurowski leads the London Philharmonic Orchestra as if it were a huge chamber ensemble. Gloriously lucid reading, well balanced and clear.  Jurowski brought out the fundamental waywardness in the music, which was refreshing. Heavy handed magnificence we associate with Establishment and power structures. Jurowski understands that the soul of Die Meistersinger is in its open-aired freshness.  He conducts the different blocs (Meistersingers, apprentices, townsfolk) so they knock against each other almost in counterpoint, so you really feel how they jostle together in the plot. No congestion whatever in the riot scene or in the tumult at the Prize Ceremony. Jurowski gives each thread its due. Just as Sachs gives all men equal respect.(even if they turn out to be fools like Beckmesser).

Though this Die Meistersinger von Nürnberg  doesn't plumb the subversive depths of this amazingly rewarding opera, it's exuberant and uplifting, especially in the final scene, where all the threads are drawn together. Wagner and Sachs are much deeper, but in these discordant, polarized times, take heed of the message of this Glyndebourne Die Meistersinger von Nürnberg. Harmony is a lot more difficult to achieve than it seems.  This production may be sunny but it's not shallow.

A more formal version of this will appear shortly in Opera Today. Click HERE for link.  OT is an international publication, and Glyndebournje is now reaching audiences well beyond the UK. So this is being rewritten for a more international audience. Same conclusions, but more on Jurowski's intelligent approach to Meistersinger in a summer setting. Click HERE for another on why Jurowski's approach worked so well.

When this gets to DVD, get it! There will be screenings in cinemas this summer and on websites.
Photos copyright Tristram Kenton, (details embedded) courtesy Glyndebourne Opera
at May 22, 2011

"Sunny but not shallow" could be a description of many of your reviews, which always highlight aspects of performances that other critics miss.

Can't wait to watch the webcast of this production!!

Thank you, Jade, much appreciated. I write because I love music and I write for people like you who care about it too.