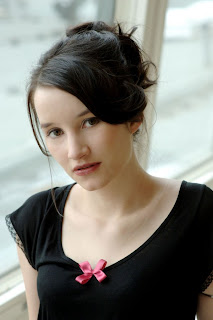 Anna Prohaska gave a good debut recital tonight at the Wigmore Hall, even though she clearly wasn't well, and had cancelled a concert in Berlin earlier this week. "But this the Wigmore Hall!" she said. "The Temple of art song!". Besides, she added, friends and family had travelled to London from all over Europe to support her. "They'd assassinate me if I cancelled", she added.

All singers get sick, many risk their voices to carry on regardless. but few are so candid and charming about it. Anyone can sing, but only the really great can communicate this eloquently even before singing a note. Prohaska has star quality because she can captivate an audience and involve them in what she's doing. The mark, I think, of  someone born for the stage. As we already know from hearing her vivacious Zerlina at La Scala lasr year (read about that here)

Few singers would dare essay Prohaska's ambitious programme for the Wigmore Hall. A daring range of styles. Debussy, Fauré, Wolf, Mendelssohn, Schumann, Schubert, Haydn, Mahler, John Dowland and Henry Lawes, Arthur Honegger, Karol Szymanowski and, to cap it all Dvořák's Song of the Moon from Rusalka. Because she wasn't well, you could hear the strain, but Prohaska's professionalism won through. She can pace herself for the fiendishly difficult rhythms in two of Szymanowski's Songs of a Fairy Princess, (read here), with their exotic ululations, while resting (somewhat) in the gentler Dowland and Lawes.This programme would tax the finest and the most experienced, so it's to Prohaska's credit that she tried it at all. Eric Schneider, Matthias Goerne's regular partner, supported her well.

But the programme wasn't just a vehicle for Prohaska's talents. It served an important artistic purpose. Its title was "Song of the Sirens", songs about water spirits and seductresses associated with water and the sea. (read more about what I've written on the subject HERE and other posts on Schubert and Wolf). It's quite an achievement on its own terms - whoever devised this programme knows their repertoire well.  By no means all obvious or popular songs, but a treasure for repertoire buffs like me. Prohaska should keep this programme for the future because it's exceptionally rewarding and would make an unmissable debut CD. EXTRA ! I guessed right. She already has made a CD of these songs for Deutsche Grammophon. Must get !
Photo: Monika Rittershaus, Askonas Holt.

You can hear whole concerts on the Berliner Philharmoniker site where Anna Prohaska sings with Claudio Abbado conducting the Berliner Philharmoniker. But I thought, instead, honour where she gets some of her genes from, her grandfather Felix Prohaska. Below, he's conducting Alfred Poell and the Vienna Staatsoper Orchestra  in Mahler in 1950. This is one of the landmark performances, which everyone interested in Mahler song needs to know, still one of the best despite 60 years of competition.