The secret history of Louie, Louie 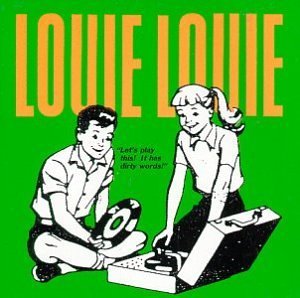 If you were old enough or young enough in the 1960's you could not have escaped Louie, Louie. It was wilder and more radical than the Beatles or Rolling Stones. Downright dirty! The slurred vocals and beefy, aggressive guitar licks suggested something so horribly indecent that it could not be articulated. In those innocent days when girls wore white socks and cardies, it was like an explosion of primitive Id. The song was immediately banned in Singapore and other polite places.

The original song was penned by Richard Berry in 1955, and was an innocuous semi-calyposo about a lonely sailor. It wasn't a hit, but Berry tourede the Pacific North West, then a fairly conservative place where people did things like logging, farming and fishing.  Then a band of local whitebread kids covered it and the song went ballistic. The Kingsmen were wholesome, suburban from middle class homes, their band supported by their parents. But their version of Louie Louie was anarchy,  a sudden, volcanic explosion of primal Id.  Now the region is the Heimatland of Grunge (Kurt Cobain, etc).  Go figure?

While Berry pronoundced the name Louie, Louie like it was Louis XIV, the Kingsmen growled Loo-EI Loo-EI Oh Bebbeh!  like a cannibal chant pounded out with imaginary spears. Because the words were unintelligible, you could read anything into them, but the mood was unmistakable.  That driving beat that let nothing get in its way. "Me gotta go, oooh no! yeah, yeah!!"  "They can't speak English!" said my Dad. Mick Jagger seemed so tame. Being the hippest, coolest kid in the entire region, it was inevitable that I should be drawn into Louie Louie although I was a nerdy A student already absorbed in Schubert. No regrets, for Louie, Louie opened out dark territory for a sheltered kid like me, but in a safe way. And it did enhance my love for Schubert who intuits wild shores, though he does it more elegantly. At that age I was listening to Galli-curci and to bel canto. Later still, Varèse was a breeze and The Rite of Spring perfectly easy to access.  Louie, Louie has been covered many times (a fairly weak British version by the Kinks) but the Kingsmen were the most original and the best.