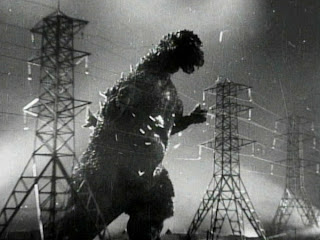 It's been a year since the tsunami hit Northern Japan, followed by the emergency at Fukushima. The western news media have moved on, but for many of the Japanese involved, the trauma hasn't ended. Earlier this month, BBC2  TV ran a programme "Children of the Tsunami" (clip here). Kids are more matter of fact than adults, because they're so direct. These kids were positive and upbeat but I suspect they'd be a lot more screwed up if they didn't have good families and a supportive culture which predicates on everyone chipping in together.  One boy was so young he couldn't relate to things and became mute. It's a gradual process and full healing won't come soon. When one of the boys was asked what he'd do to reverse the disaster, he innocently said, "pick it all up and put it back in the sea where it came from". Perfectly logical if you're a kid. And presumably one who's grown up with Japanese ideas of the balance of nature.

Last year I wrote about Ishiro Honda's 1954 film Godzilla (Gojira in Japanese). Godzilla rises from the ocean and wreaks havoc on land. Everyone thinks the world is going to end. Then the scientist hears schoolchildren singing "The Prayer for Peace" and knows what he has to do. The music for the film was composed by Akira Ikufube 伊福部 昭 (1914-2006), himself a victim of radiation, but who lived to a ripe old age. Ikufube's score is evocative when you listen as music, without the film. Godziilla's main theme is poignant and beautiful, though he's a monster. When he stomps on land, and tears up electricity  pylons, the ostinato theme sounds like The Rite of Spring, only more bereft and anguished. Then, when the children sing the Prayer for Peace in a plaintive minor key, you realize it's an adaptation of the main Godzilla theme. Godzilla is much more than a monster movie, it's a parable about the power of nature, an art movie in every sense. DETAILS HERE.  Ikufube's full score is now available minus film so you can enjoy it on both levels. Also a lot of his symphonic music and non-film work. Please see lots more on Japanese film, Japanese composers and music for film on this site.