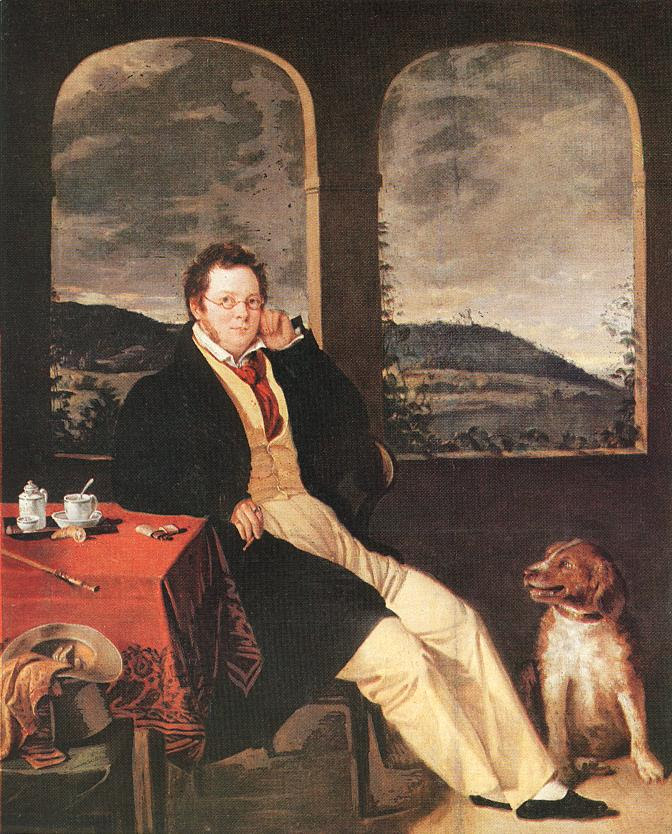 Schubert wrote nine symphonies, but ten operas, though many are incomplete and known only in fragment. Everyone knows the symphonies, but few the operas, even though the composer wrote so well for voice. The Spirit of Schubert week starts on BBC Radio 3 today and is worthwhile because it covers not only "greatest hits" but relative obscurities.

Read the schedule carefully, because among the naff stuff like celebrity chatter and request shows (shades of the 1950's!) there are some good things. This schedule would have taken ages to organize because it's so varied. (logistical things amateurs couldn't do), But listeners can pick and choose. No-one's compelled to listen to evertthing, though there are probably worse ways to pass your time.

The highlight is Fierrabas on Saturday night, online for a week after). The performance chosen is the classic version conducted by Claudio Abbado, with Karita Mattila, Josef Protschka, Thomas Hampson, Robert Holl and László Polgár singing Boland.That cast shows the regard in which the opera is held, as music. I learned Fierrabras from the Zurich Opera staging (2005) which has Polgar as the King, Jonas Kaufmann as Fierrabras, Michael Volle, Günther Groissböck, Juliane Banse etc. cond. Franz Welser-Möst. The plot is convoluted and involves frequent interactions by Christians and Moors, thwarted lovers who marry past race/religious barriers and have similar names (Roland and Boland, enemies) and voice types (for much the same reason as Mozart uses similar voice types in Don Giovanni).

The Zurich production was staged as if in a toy theatre of the period with a silent actor playing Schubert, pushing the "wooden" characters into life, and working the narrative out on a blackboard. .The groups of male singers are costumed and made up like facsimiles of Schubert which makes the plot even more confusing. Giant piano and pieces of period furniture. But it's very intuitive. The idea is that Schubert, not a theatre man as such, is working in his study, imagining how characters might function, animating them with his music. .As drama, Fierrabras is clunky, so the Zurich production (Klaus Goth) reminds us to focus on the music, some of which is good. Fierrabras is unlikely ever to be standard rep except in concert performance, but it is by no means untypical of other German Singspiele of its time.

Because our assumptions of what opera should be are defined  by Wagner and Verdi, it's often hard to appreciate that they were the exceptions, rather than the norm. Schubert's operas, like Alfonso and Estrella  fit in with German mores of the time, further being eroded by the radical appearance of Rossini. his German style is by no means obscure, so there's no excuse for mixing performance values. Listen to Christine Brewer mangle early Lieder on one of thye BBC shows. Or rather, don't. Schubert was by no means a theatre innocent as he's sometimes portrayed (curse the "little Mushroom" caricature).  At the age of 14 he started going to the opera, and was present for the Vienna premiere of the second version of Beethoven's Fidelio. He also had connections with Salieri and knew Mozart's work. So think Die Zauberflöte, when thinking of Schubert's operas. Schubert isn't in that league, but that's where he's coming from.

So I've used a painting from 1827 of a man who resembles Schubert, not one of the usual pictures. It's by a painter called Gábor Melegh (1801-31), a direct contemporaray of Schubert. It's interesting because it's a "modern" painting (for the period) but the style is vaguely Renaissance and Italianate. "Modern" hat and teacups, 16th century perspective - see the table). It embodies the idea of modern, Germanic Schubert connecting to Italy. Hunt about carefully through this BBC Radio 3 Schubert week as there are some treasures embedded. Sakontala, Die Verschworen, (Moll, Moser) Der Vierjahrigen Posten (Fischer-Dieskau, Schreier) HERE, and hughly recommended, Schubert choral and part songs on the Choir from Sunday, one of the few programmes which the BBC has not dumbed down. Aled Jones knows what he's talking about and is genuinely informative. Support him.
at March 23, 2012

Email ThisBlogThis!Share to TwitterShare to FacebookShare to Pinterest
Labels: Schubert

small correction - the Zurich Production of Fierrabras is by Claus Guth.