Fascinating Royal Opera House 2012-13 season mixes daring with prudence – passionate. "Opera is an emotional fitness centre", says Kasper Holten, Director of Opera, because it exercises many different feelings. Through opera, we engage with the drama of being human. Running an opera house is more than just business. Its "product" is creativity. If opera houses scale back and play safe, they lose the vision that makes opera thrilling in the first place. Holten's strategy for straitened times is daring. Grow the audience from strength, giving patrons something to get excited about, whether they're new to the genre or not.

Six new opera productions, higher profile revivals and an ambitious programme of external events that will expand the reach of the Royal Opera House far beyond Covent Garden.  More live HD broadcasts, so ROH premieres can reach wider audiences. More links with smaller, independent companies. Even an experimental pricing structure. The whole atmosphere is a buzz, reflecting Holten's dual responsibilties as manager and as creative artist.

Obviously the big Wagner Ring will dominate the autumn season. It's sold out, despite sky-high prices, but Wagner's anniversary is most definitely a special occasion. This production is aimed at a more general audience than a core of Wagner aficionados. Bryn Terfel, Susan Bullock and other stars ensure its success. This is a new Keith Warner production, conducted by Antonio Pappano. Wagner is always interesting and the sheer sense of occasion is part of the attraction. It takes the Met to really destroy the Ring. The ROH Ring should keep the house afloat for years. 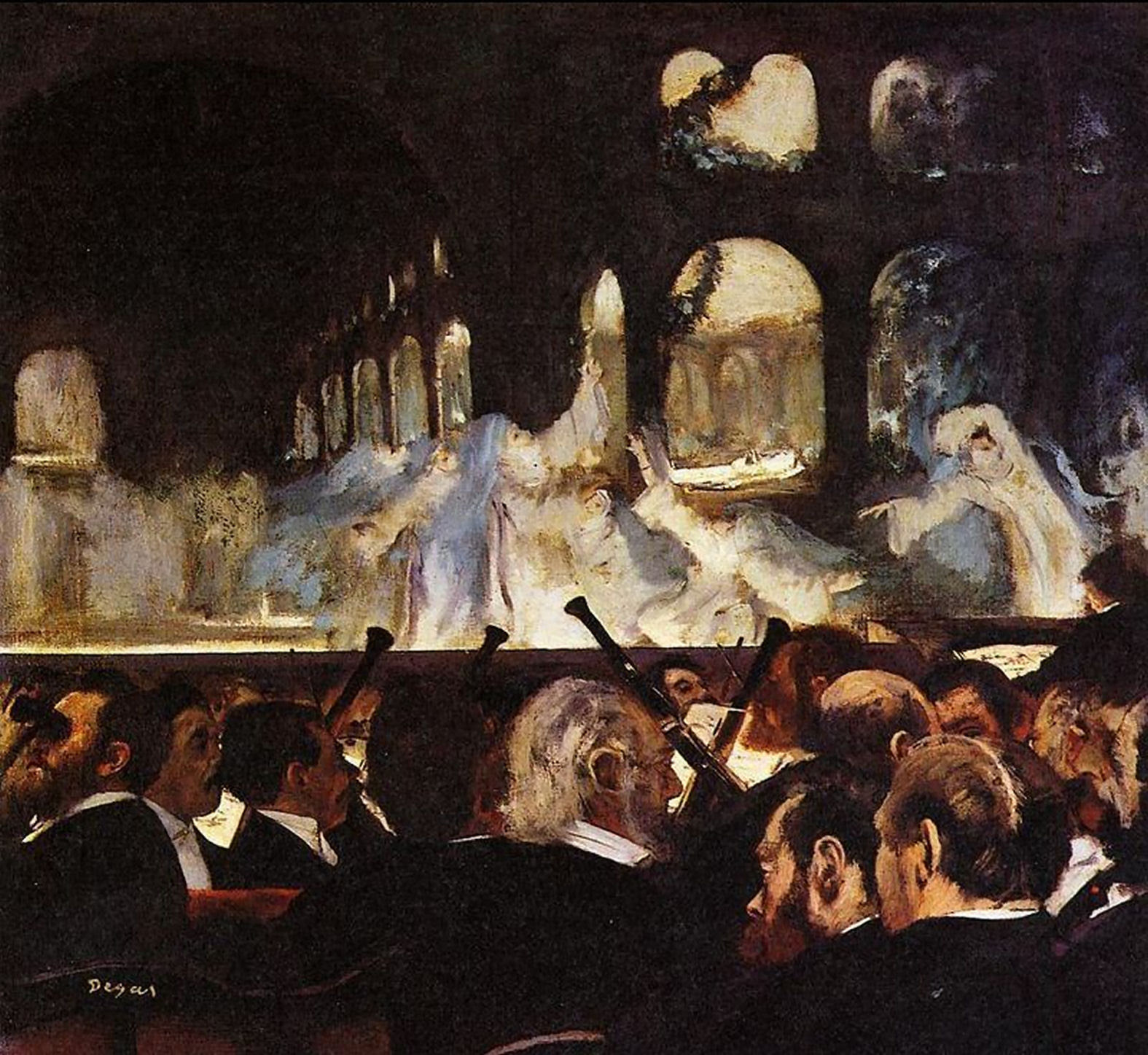 In December, Giacomo Meyerbeer's Robert Le Diable makes its first London appearance since around 1890.  Once, Robert Le Diable was un succès fou, a sensation to which all Europe flocked, for it marked a new style in French opera. Heinrich Heine attended, incorporating it into his poetry "Es ist ein großes Zauberstück, Voll Teufelslust und Liebe" (read the full story here).  The painting at right is Degas, Ballet from Robert le Diable (1876). Some of the arias are very well known, since Joan Sutherland was very fond of them. So hearing it in context is a great opportunity. There's a renaissance in 19th century French opera, and the ROH has been on the crest, with Massenet, Berlioz and Gounod. The cast is superb. Brian Hymel who so impressed as the Prince in Rusalka, will be singing with Diana Damrau, Marina Poplavskaya, John Relyea and Jean-François Borras. This repertoire diverges from the Italianate style so fashionable at present, so  it's good news for opera adventurers exploring "new" perspectives.

Benjamin Britten's centenary falls in November 2013, so the eyes of the world will be on how Britain honours the greatest opera composer it has produced. Britten often visited the ROH (he used to eat at Bertorelli's) but he wasn't really part of the ROH in-crowd then. So it's good that the Royal Opera House is giving him his due, and with a twist Britten would have appreciated.  Had the ROH been boring and played safe, we'd get another Peter Grimes. Instead, Holten has chosen the extremely rare Gloriana, which even Britten true believers don't know well. This is thrilling, as Gloriana is problematic to stage, for Britten experiments with Elizabethan form.  There's only one recording (dull) and an Opus Arte DVD with Opera North (brilliant) which treats the work in cinematic style, which is an excellent solution. (review here). It would be hard to top that but the Royal Opera House has resources few other have, and Richard Jones as director could make it work. Strong British cast:: Susan Bullock, Kate Royal, Toby Spence, Mark Stone and other stalwarts, conducted by Paul Daniel. Definitely a "historic event".

Three of the most important British composers are highlighted this year. Britten, Harrison Birtwistle and George Benjamin, "The 3 B's" quips Holten. Perhaps the most significant British opera in recent years, Harrison Birtwistle's The Minotaur, is revived at last in January. Get to this, since the DVD is inertly filmed, something I hope Holten will address at some stage, since film is the next frontier in bringing opera to audiences outside the house. Like any other part of staging it needs to be done well. John Tomlinson, Christine Rice, Andrew Watts and Johan Reuter return, and Alan Oke sings the part created by Philip Langridge (read the interview I did with him here about The Minotaur and about Birtwistle, his close friend).

George Benjamin's new opera, Written on the Skin, premieres March 8 2013. This is a very important occasion indeed, and will be heard in eight European cities. Benjamin's not a fast writer, but painstakingly scrupulous, and this is his most ambitious large work to date. The libretto is by Martin Crimp, with whom Benjamin created the masterpiece Into the Little Hill. Read more about that here. The plot's dramatic. A rich man hires an artist to illuminate a manuscriipt. The rich man kills the artist when the latter falls in love wuth the former's wife and has him baked into a pie and served for dinner. Barbara Hannigan sings the wife,  which means the part will be fiendishly inventive and demanding. That's Hannigan's speciality (read about her singing Boulez here on this site). Obviously a countertenor role to match, this time Bejun Mehta. Benjamin is a quinessentially European composer, so it's good that Written on the Skin will be broadcast live, internationally in HD.

The Royal Opera House has always been good for Verdi. The new season brings a Verdi Immersion, three operas in sucession, a sort of Verdi Ring, since his anniversary coincides with Wagner's. The series starts, appropriately, with Nabucco, in a new production by Daniele Abbado and Alison Chitty. Plácido Domingo and Leo Nucci alternate Nabucco. Domingo's presence alone will make this an attraction. He's an icon as much as a singer. Acting isn't affected by age. Domingo can project character, which is what this role needs.  Since it's Nabucco, the Royal Opera House chorus will be in their element. and they're so good they could carry the show. Nabucco is followed by Don Carlos in May and Simon Boccanegra in June/July. Although the latter are revivals, if they're worth doing, they're worth doing well, so the ROH is are injecting high-quality standards worthy of the best new productions. Antonio Pappano is taking over the conducting and Verdi is his speciality. Absolutely top quality singers - Harteros, Kaufmann, Kwiecień, Furlanetto, Halvarson, Hampson. Even if you've seen these umpteen tmes before, this time they will sound fresh.

It's good that the Royal Opera  House has in Holten a director who is a hands-on theatre person, because that ensures he's on the ball as an artist. February brings his first ROH production, Tchaikovsky's  Eugene Onegin.  Partly Russian cast with Simon Keenlyside for popular appeal. Robin Ticciati, the new incumbent at Glyndebourne, conducts. Since the ROH will be working more with other houses like the innovative Music Theatre Wales, what might this signify, if it means anything at all? Chances are that this time the audience won't mindlessly applaud the scenery as they did at the ENO, but instead pay attention to the music.

Also an indicator of new creative times is Gioachino Rossini La Donna del Lago in May, a new production directed by John Fulljames, Associate Director  This is significant because it was to have been a co-production, but the Royal Opera House pulled out and created their own.  This is radical, but it's much better to do good work than regurgitate a turkey. Operas have a long run in time, so it's a wonder this doesn't happen more often and save more reputations, time and money. Holten describes Fulljames as the ROH "dramaturge", an artistic philospher with very strong theatre skills, as anyone familiar with his work over the years will recognize. Fulljames's new production was put together efficiently, using pre-existing technical resources for new purposes. This isn't recycling, but resourcefulness, as it takes a genuinely creative mind to work round difficulties. Much trickier than working from a blank canvas. Perhaps this is a good way forward at a time of budget restraint?  The cast includes Joyce DiDonato, Juan Diego Flórez, specialists in this repertoire, so for singing alone, this new La Donna del Lago will be intriguing.

The more you look into the Royal Opera House 2012-13 season, the more there is to look forward to! Further details on the ROH website HERE and on Opera Today.
photo: Peter Suranyi
at March 14, 2012