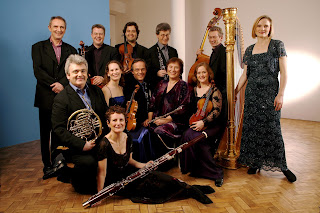 The Wigmore Hall's resident Nash Ensemble graced Edinburgh for the closing concert of the New Town Concert Society's 2011/12 series. Their programme opened with James Macmillan's 2007 Quintet for Horn and String Quartet, continuing the horn-featuring programming the Edinburgh concert scene has seen this season. This work shares the sound world of Macmillan's widely acclaimed large scale work, Tuireadh, a lament for the Piper Alpha disaster, but is for smaller forces. It also showcases the hunting and military aspects of the horn's character as an instrument, contrasting these with passages for various of the players suggesting a keening lament, further referencing Tuireadh. Of these latter sections, an extended solo for the viola – here ably performed by Lawrence Power, who featured in last week's performance here with the Scottish Ensemble – stand out and is one of the most delightful passages in the entire work.

Although the Macmillan piece was both interesting and enjoyable, for me the highlight of the evening was a sensitive and evocative performance of Brahms's lovely Trio for Horn, Violin and Piano (Op40), another work again featuring the French horn. This also shares with Macmillan's quintet the feeling of an orchestral scale of work, notwithstanding the use of compact forces, especially in this trio, it has much of the expansiveness of the Second and Third Symphonies. The works also share the element of mourning, this Trio being written in memory of Brahms's mother, who had died only four months before it was completed. Yet another parallel between the works is the referencing of the use of the horn in hunting, Brahms portraying a forest scene in the scherzo and featuring the hunting horn in it, giving a foreshadowing of Mahler.

The use of the horn gives a typically Brahmsian tone quality, as with the use of the clarinet in the chamber trio he wrote for that instrument, although there is also a clear homage to Bach. This work's emotional heart is in its yearning Adagio third movement, again a feature which draws parallels to the great Adagios of Mahler, whose debt to Brahms was vividly illustrated in this work, such as that of his Fifth Symphony.

This was followed by a good account of the Dvorak Quintet for Piano and Strings (Op81), allowing horn player Richard Watkins a well earned rest. This was a good performance of a work which although widely performed I consider over-rated; to my mind it would have been preferable to have continued with more Brahms and played his own superior Quintet, or to have selected the other major and pleasing romantic 19th century Quintet, that of Schumann.