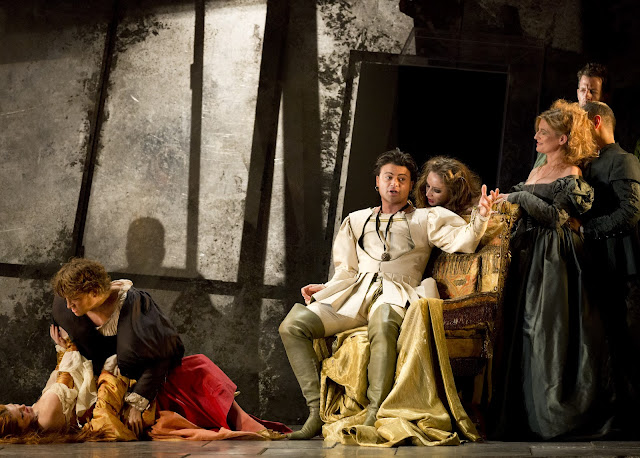 How would a period instrument specialist like John Eliot Gardiner approach Rigoletto, Verdi 's sordid tale?  This was his first Rigoletto (though not his first Verdi) but he created it with great insight. There's a lot to be learned from period practice, and anyone who knows it well knows how rambunctious it can be. Gardiner knows the Renaissance was violent. Verdi isn't sentimental and the court at Mantua was cruel.  This was historically-informed practice adapted to repertoire often milked for lush effect. Gardiner's vigorous appraoch might not appeal to all, but it's extremely perceptive. He makes Rigoletto raw and shocking, as it should be.

David McVicar's 2001 production is bleak. The ducal palace is evoked by a metallic wall : shiny but hard . Michael Vale, the designer, uses a large wooden sructure that pivots like the twists in the plot, but the focus remains on the cast. Vocal perfoirmances take their cue from Gardiner and McVicar. Vittorio Grigolo bursts onto the stage in full throttle. "Questa o quella"  is thrown like a gauntlet. The Duke doesn't brook challenge.  Grigolo has the power and showmanship to create the Duke, bursting with arrogant machismo. Like the Duke, he's a force unto himself. The courtiers are a mob for whom subtlety means nothing. Grigolo's Duke uses swagger as a weapon. The Duke's brutishness come over well, moments of decorative richness adding a touch of devious artifice, totally in keeping with character. Yet Grigolo also manages to suggest the Duke's inner fragility. With Gilda, he can play the man he might have been had he not been born to a crown. The duet with Gilda is genuinely tender. In "Ella mi fu rapita", Grigolo let the Duke's mask drop for a moment, singing with genuine tenderness. In many ways this is the heart of the opera for it touches on the Duke's inner psyche. Significantly, Verdi keeps cutting "La donna è mobile" so the sections don't connect. Gardiner emphaszies the disjoint, for by this stage, the Duke is back to his old tricks, morally disintegrating again. Grigolo is a consummate actor and creates the part with more depth than he'll get credit for. The problem is that the Duke himself is hard to pin down.

There have been so many great Rigolettos over the years that Dimitri Platanias has a lot to live up to.  This is his Covent Garden debut, though he has done the role many times elsewhere. McVicar's concept has Rigoletto crawling like a broken spider, which is perfectly valid. Platanias is physically imposing, with a voice to match, so a different concept would perhaps suit him better.  Platanias does Rigoletto's anger rather than his anguish. His dialogues with Gilda show Rigoletto's fatherly side, but don't access the demented, tortured soul within. Nonetheless, he's a good counterbalance to Grigolo's Duke and to Matthew Rose's Sparafucile, sung with the power of an amoral  force of nature. Rose doesn't need to invest the part with histrionics. To Sparafucile, murder is a business transaction without emotional meaning.  Rose's detachment is chilling in itself. In his exchanges with Christine Rice's Maddalena, Rose's sibilants cut with suppressed sexual violence. They're not "brother and sister" in the modern sense of the term, but pimp and whore.

Ekaterina Siurina is an impeccable Gilda. It's her signature role with which she debuted with Dmitri Hvorostovsky at the age of nineteen. A beautifully rounded, sensual "Caro nome" expresses the passion in Gilda's personality, making her love for the Duke perfectly plausible. Gilda is too sheltered to articulate her feelings, but her instincts burst forth. Siurina's clear, ringing timbre and perfect pitch make the long cadenzas bloom with promise, expressing emotions that words can't convey. This intensity makes her sacrifice believable too. When Siurina appears dressed as a boy, her voice glows with purpose, for she's found a way to fulfil her love in a sacrifice only a cloistered Catholic innocent might chose. Ironically, Rigoletto loses his child becauase she's been brainwashed by her upbringing.

This was an extremely rewarding Rigoletto because it cuts past surface glamour and goes to the visceral drama.

More soon in Opera Today, including an article on the live broadcast on 17th April which will be shown simultaneously in cinemas all round the world.  Film is the next frontier in opera. More people will see any production on film than will ever see it in house, so it's essential that opera filming develops as an art form in itself, like conducting, direction, singing and staging. With Kaspar Holten at the helm at the Royal Opera House, perhaps issues in filmed opera wll be taken seriously.  I've written a lot about filmed opera and music and will be writing more.
Photos copyright Johan Persson March 2012, details embedded
at March 31, 2012