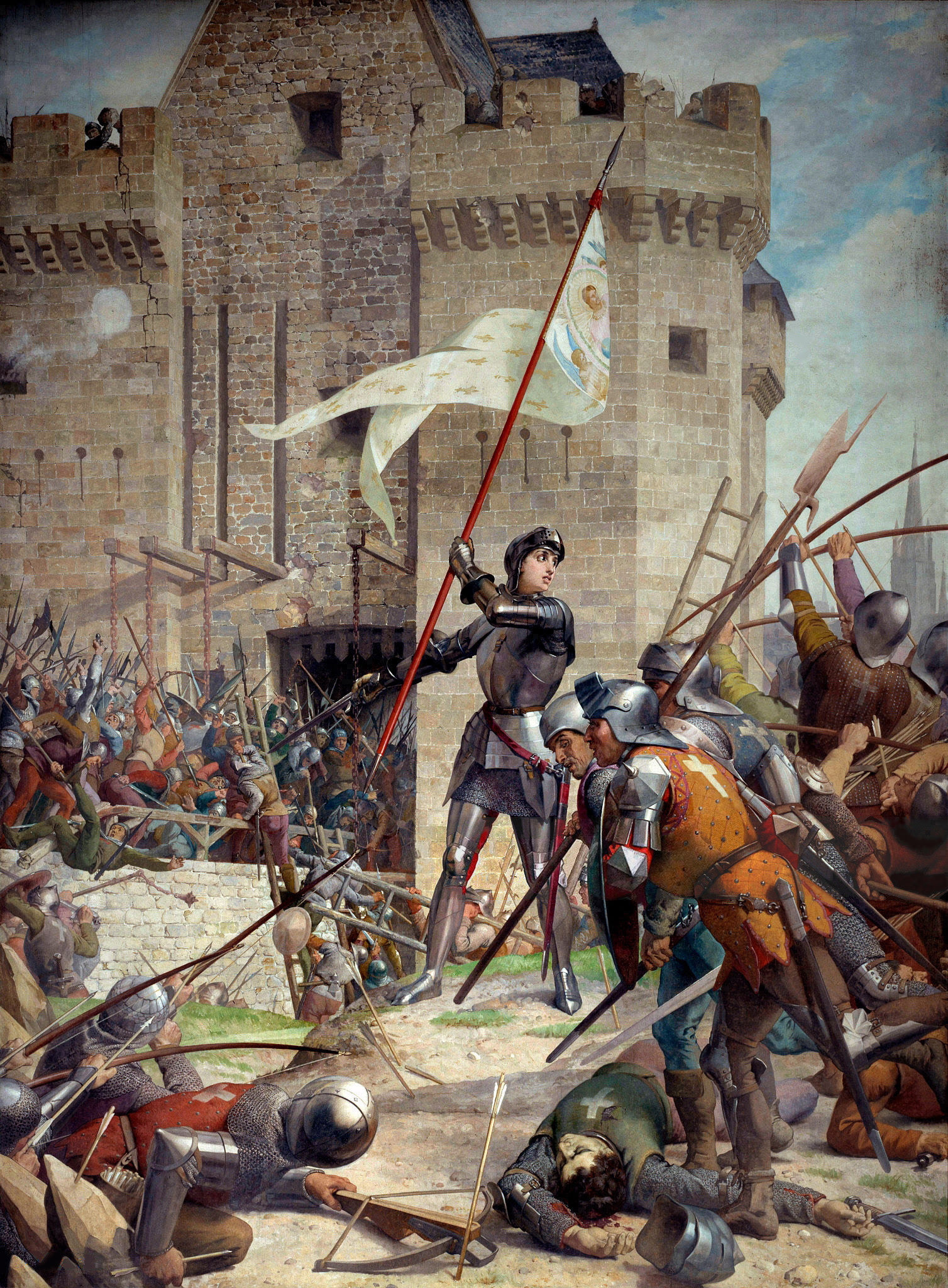 Walter Braunfels's Jeanne d'Arc, Szenen aus dem Leben der Heiligen Johanna is a much underestimated work. It's eclipsed by the fame of Die Vögel, but Jeanne d'Arc is a masterpiece. Braunfels fought at the front during the First World War. The trauma completely changed his perspectives. Die Vögel is is an early stage in Braunfel's's engagement with the issues of the 20th century. Jeanne d'Arc is in many ways its culmination, politically, spritually and musically.

Braunfels started writing Jeanne d'Arc in 1938. He'd been proscribed by the Nazis, and made an unemployable non-person whose music could not be performed in public. Hitler was threatening war, staved off by British appeasement. By the time Braunfels completed the opera in 1943, war had broken out all over again on an even wider scale than the war he'd known. This time his sons were at the front.. The madness was happening all over again."We are like castaways on a desert island, around which the hurricane continues to rage", he wrote.

Braunfels's choice of subject was deliberate. Joan of Arc rallied the French against English invaders. This time France was invaded by Germans. Joan was a powerless girl who stood up to overwhelming forces. Throughout Europe in the 1920's, 30's  and 40's, Joan was a symbol  explored in plays, movies, and music. Braunfels's most direct inspiration was Paul Hindemith's Mathis der Maler, which he heard in Zurich in 1938. By connecting to medieval Christian Europe, Braunfels eschews both totalitarian anti-religion and the kind of nationalism that causes war.

Braunfels's libretto, which he wrote himself after reading about Joan's trial, places the context firmly in  a time of crisis. A chorus of villagers cry in panic, Hilfe, Hilfe! As Joan's father later says "An Himmel lohnt drer Brand von tausend Höfen". Johanna, however, is sitting by a tree from which a strange light is shining. Voices tell her that she has a mission. She';s so child-like that she sings a ditty, complete with tra la las. "Denn ein Kreiger, ein Kreiger, soll ich werden".

Braunfels's music is pointedly pure and simple. Single instrumental groups, often solo instruments, swathes of strings and winds suggest flowing movement not decoration for its own sake. Even in the scenes in the royal court, textures are clean, texts conversational. King and knights, portrayed as ordinary men. When Saint Michael appears, he's almost one of their own. For the faithful like Johanna, (and Braunfels), saints are as natural as normal people.

Braunfels uses a formal structure to frame the narrative, like a  medieval painting. Three main sections, Der Berufung (the summons) Der Triumph and Das Leiden, (Sufferings) unfold. Der Triumph, of course, lasts but a few minutes. It's preceded by a bizarre interlude, after the first Act. The Herzog de la Trémouille steps in front of the theatre curtain and sings a monologue. "When God created the Fool, he, the wisest of all, could be sure that scum (Abschaum) would arise from it". The Duke thinks Johanna is scum, for she leads "Die dumpfe Masse" (stupid masses) "From every hole there now crawls all who were poor, and who, deeply humiliated, long for a 1000 year Reich - troopers, roughnecks, greedy wastrels!". (Landsknechte, Raufbolde, geldsücht'ge Habenichste). Ferocious dark chords, skeletal discords, smoky woodwinds. The vocal part is set with angular extremes. "And I alone" sings the bass, "should be wrong because I don't follow deception and don't give in to urges". Perhaps Braunfels is referring to non-believers who distrust faith and miracles. But the references to the rise of the Brownshirts are so obvious that they can't be ignored.  Anyone who thinks Braunfels was a mindless, dreamy Romantic needs to hear this, and wonder what its upside down morality might mean.

The moment of Johanna's triumph at Rheims with fanfares. At last the music soars as one would expect, but this is no cinematic glory. Braunfels keeps his colours clear, the text simple. "Johanna ! Johanna!" the townsfolk cry, but there's a chill, which prepares us for the nest scene, where at dawn, Johanna is communing alone with her voices. This minor-key stillness seems the true heart of Braunfels's meditation,   We're spared the deatils of Johanna's first imprisonment. Each scene is preceded by a Vorpeil that creates mood, but the one that begins the third act expresses the passage of time. Johanna has been confessed and recanted, yet she's still in prison. Dark rhythms, blasting timpani, trumpets blasting, Johanna's voice ascending shooting up the scale, all sudden, tense moments cut off in their prime.  Distant kin of the jerky bird rhythms of Die Vögel and Die Verkündigung. The Vicar Inquisitor condemns Johanna in a mix of speech and stylized chant. The king and nobles call Johanna  a fraud : their music vaguely like medieval march. Then St Michael appears, a Lohengrin whom no-one can see.

Long, keening lines in the orchestra. We're now at the stake in the marketplace at Rouen. Joan is calm for Saint Michael has told her why she must die. Significantly, now, Braunfels gives Gilles des Rais (Bluebeard) an interesting aria. "Nien, niemals, nein, niemals, so endet das nicht"  He can't believe that the real miracle is Johanna's death, not her escape. Braunfels shows des Rais as sensitive, confused and desperate for certainty, "Gewissheit! Gewissheit! Gewissheit!". Perhaps it was that crisis of faith that drove the historic des Rais into madness and turned him into a mass murderer of innocent children? This is an aspect of the story few explore, but Braunfels does it by implication,  and shows it as.a very 20th century anguish.

The Bishop of Beauvais insists "Mein System war der richtiges!", but the part is written to show the strain on the tenor's voice. Yet again, we hear the bird rhythms of  Die Vögel , and how they function as exclamation points breaking up the vocal line. Not comfortable, soothing or Romantic at all.  In contrast, the deeper, more lugubrious timbre of the Vicar Inquisitor, who shows more sympathy with Johanna. The chorus howls like a mob and in a sudden crescendo, we can hear the flames ignite. Screams and  eerie"smoke" like cadences from the orchestra. Gilles des Rais appears again, his last aria tinged with extreme grief. He sees Johanna as Christ-like, but still can't understand what her death means "Satan, du hast geseigt". Only when the mob discovers that Johanna's heart did not burn do they realize a miracle has taken place. "Wir haben eine Heilige gebrannt" cries the Vicar Inquisitor. By then, though, it's too late.

Braunfels's Jeanne d'Arc, Szenen aus dem Leben der Heiligen Johanna is mock medieval, but like Hiundemith's Mathis der Maler, Hartmann's Simplicius Simplicissimuss, (more HERE) Orff's Carmina Burana and indeed Braunfel's  Die Verkündigung. (more HERE) the medievalism is but a disguise for utterly modern preoccupations.  There's nothing retro or escapist in these pieces. Far too much is made of the fact that fashion changed after the war, and this music didn't get performed.  After the trauma of the Second World War, people were hardly in the mood to deal with reminders of the period, especially when, up to 1989, much of central and eastern Europe was still controlled by the Soviet Union, in direct consequence of the war. Similarly, the "jazz age" and modernity of the 1920;s was a reaction against the trauma of the First World War and the forces that shaped it. As Braunfels would certainly have understood, cultures need periodic renewal..

It's nonsense to blame Schoenberg or modern music for the eclipse of composers like Braunfels. Fashions in music change all the time. No-one forced anyone to write 12 tone, it just opened up new ideas. Berg and Webern wrote in very different styles to Schoenberg.  Composers often seem to disappear after they die for no apparent reason. Schubert, for example, was obscure long after his death, revived sporadically, and the D numbers organized for the 1928 centenary. Even Bach fell out of fashion until Mendelssohn performed him and made sure he was published.

The notion that Braunfels and others were "suppressed" by modern music is as crazy as thinking you can be President if you can see Russia from your backyard. Braunfels and his peers were modern.  There are many kinds of modernity, and hearing them in the context of art, literature and the culture of their time, shows how they fit into place. So why the need to hear them as "suppressed" by modernity?

I don't know why only a few minutes of Braunfel's Phantastische Erscheinungen eines Themas von Hector Berlioz (read more HERE) was heard at the Proms. It was as if the composer had been posthumously castrated.  Surely those who love his work should be proud of what he achieved? But until we learn to listen to Braunfels and the composers of his time for what they really wrote, they won't get the genuine respect they deserve.