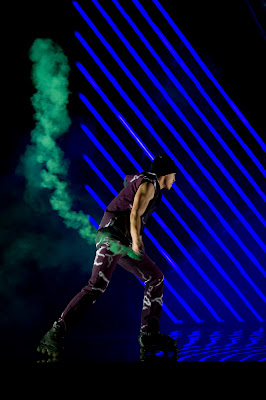 An absurd plot has never stood in the way of a good opera. Unfortunately, Judith Weir's Miss Fortune  at the Royal Opera House isn't much of an opera. It's an anomaly in an otherwise fertile career which has made Weir one of the significant British composers of our time. Every composer has dry spells. It's just bad luck that while Weir is getting maximum attention, Miss Fortune does not show her at her best. Better a revival of A Night at The Chinese Opera or Blond Eckbert than this mishap.

The surmise is reasonable enough. Billionaire parents instantly lose all they have. "I'll work, I'll live, I'll eat" sings Tina (Emma Bell) their daughter, "I'll find my way on the street". Perhaps, but the hardships she comes across are so sanitized that they're hard to take seriously. Of course this is a fairy tale, but real fairy tales have bite. Miss Fortune is so shallow you couldn't drown a gnat.

So don't come expecting real emotions in this opera, and certainly no element of social analysis. The whole opera predicates on the idea of Fate in the form of a doppelgänger in a natty tie-dyed dressing gown. "I'm with you everywhere" sings Andrew Watts, trying his utmost to sound convincing, but there's so little substance in this text that even he can't bring out the malevolent possibilities in the character. Fate isn't fair, it's insane. Countertenors have the range to madden and confound, but the music here is so even-tempered that it makes little impact.  When one of the breakdancers spins dangerously on the top of his head, risking his neck and spine, he expresses more about the nature of fate than anything in this music. It's not a good sign when a choreographer can say more about the meaning of an opera than a composer. Wonderful dancing, however. These men (members of the Soul Mavericks) were so good that they almost rescued the whole show. 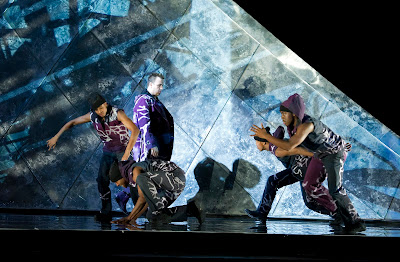 Lord and Lady Fortune (Alan Ewing and Kathryn Harries) have parts to sing that are more slapstick panto than depth, and Weir's writing for them is very good, setting each at counterpurposes to the other, which expresses personality. But poor Tina! She's such an inept cipher that Emma Bell hardly has to do much more than follow the notes. Hassan (Noah Stewart) and Donna (Anne-Marie Owens) are stock characters too, dutifully realized. .

The problem lies in the libretto. Judith Weir is brilliant at writing atmospheric, descriptive music, but such music needs something to hang on to, like flesh needs a skeleton (another image of Fate).This libretto is so weak, it's embarrassing. The banality of the text follows the banality of the narrative, and the music doesn't rise above it.  For example, sharp-suited Simon the Yuppie (Jacques Imbrailo) comes down from his office ("it's not far away") to tell Donna the Laundromat Lady that his shirt is the best laundered and best ironed he's ever worn. That's about the level of discourse in this opera. The Deus ex machina is a lottery ticket which may or may not change Fate, but it's so artificial we don't really care. Imbrailo's singing was by far the finest singing of all, exquisitely shaped and warmed with sincerity. Imbrailo is such a genuinely nice person in real life that perhaps  he can identify with the better aspects of Simon. But the beauty of his singing was at odds with pedestrian vocal demands in the score. If only the part had been written with more substance, doing justice to this level of singing.

The staging on the other hand was superb. Wonderful set by Tom Pye, based on two triangular objects suspended above the stage, onto which were projected  a fantastic array of light effects and videos (Scott Zielinski, Leigh Sachwitz, Flora and Faunavisions). This was truly magical.  Inventive costumes (Han Feng) and strong direction by Chen Shi-zheng, who injects the proceedings with a charm lacking in the music. You could have spent the whole evening marvelling at this staging.  Miss Fortune and Rusalka are mirror opposites, one wuith good music and dull staging, the other with wonderful staging and uninvolving music. But we shouldn't go to the opera to enjoy the scenery, even when it's as good as this. It's the characters that make an opera, and their feelings, as brought out in the music.

Paul Daniel is an excellent and much underrated conductor who made his name in the ENO glory days when Weir and Turnage were in their prime. He has experience and inspired good playing from this orchestra, better than several conductors we've heard in recent months. Hopefully, he'll be back again soon - he's an asset.

There were so many positives about this production. It would be hard to imagine a better range of resources utilized to make it work. But Miss Fortune is fatally flawed because it just isn't very dramatic. I longed for Mark Anthony Turnage's Anna Nicole, which has grown on me with time. Anna Nicole had its dull moments, but its grotesqueries were so engrossing that they held attention, even if they made you want to scream.

Subsequently I've been thinking that Weir wanted "impersonal" because that's the nature of Fate. Impersonal factory, impersonal violence? But impersonal is something Glass and Adams do, Weir's better than that.

Very true about the libretto. The whole thing felt flat. But even if the libretto was flat, the music never transcended it like many opera composers are able to do. The critique on my blog talks more about the failings of the music, if you are interested, please visit.
-BW http://musicofourtime.blogspot.com/