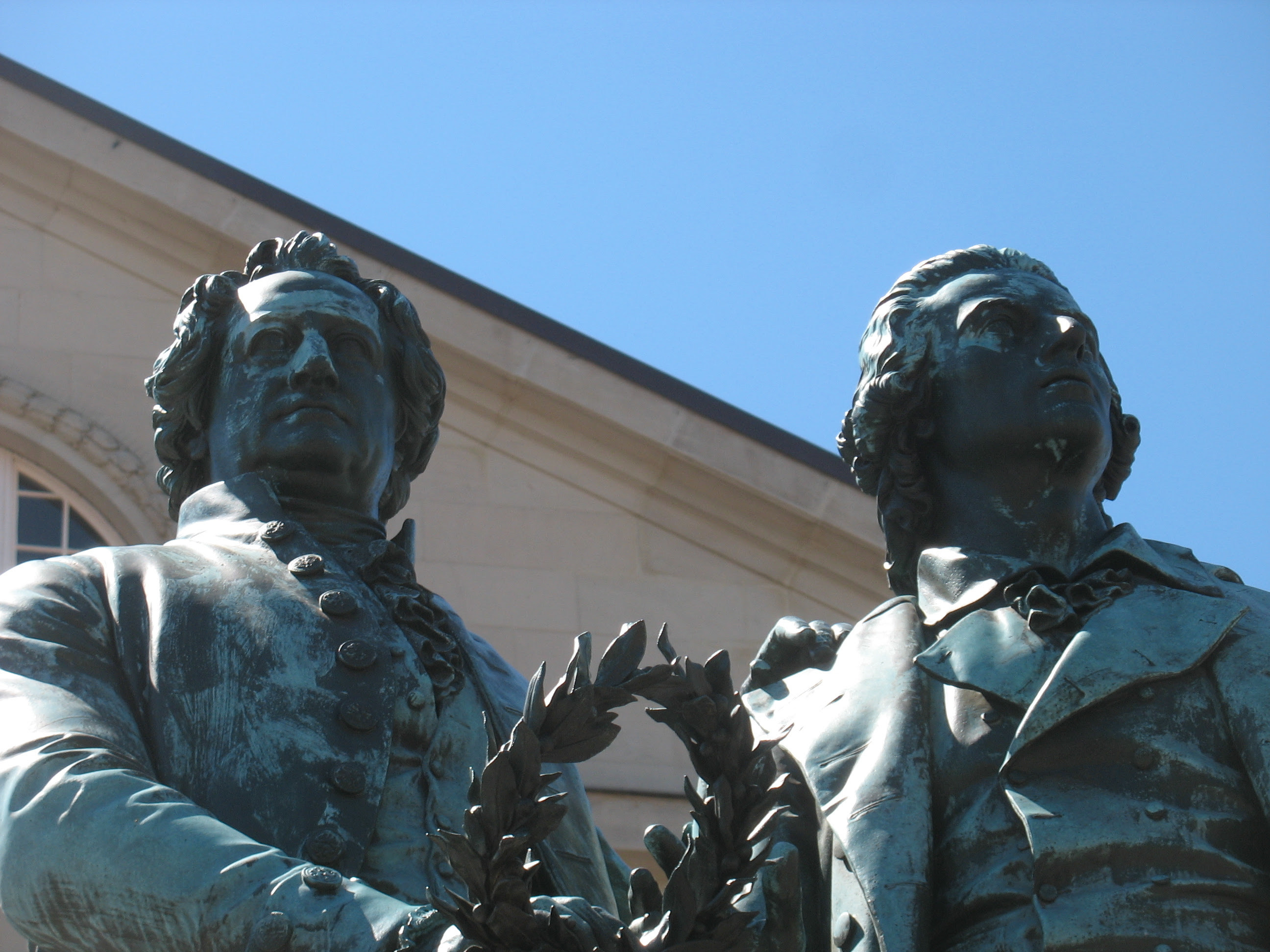 Beethoven's Ninth Symphony has featured in 114 Proms since 1897. With its message of Alle Menschen werden Brüder !, it could be the theme tune of the BBC Proms, which reach out all over the world, to anyone who has radio or internet access. The BBC Proms are the most effective foreign policy weapon of all. Winning hearts and minds non-violently works better than guns, bombs and threats.

Which is why I've picked this photo to go with Prom 61 Beethoven Symphony no 9 (David Robertson, BBCSO) (copyright David Wen-Riccardi Zhu) It's the statue of Goethe and Schiller in Weimar. The photo is wonderful because they're shown against an open, blue sky, holding laurels. So we too should be inspired by idealism, altruism and basic human decency.

Beethoven's Ninth is the kind of music than can survive bad performance and still sound uplifting. Not that David Robertson and the BBCSO were bad at all. This performance zipped along smartly. Nice clean lines, confident, poised pacing. This was a reading true to the neo-classical spirit, unfussy but uplifting. Schiller's vision is sublime, rising above grubby concerns. This performance made me think of neo-classical architecture : structural balance and elegance. Female soloists on the shrill side, but Spence and Patterson were good. The wind and flute figures around Paterson's singing were very perky, so when the choir burst forth, it felt like light had filled the hall. Choruses very tight and bright.

David Robertson made his name in modern music, having conducted Ensemble Intercontemporain, no less. He's energetic both on and off the podium, and does interesting things. I enjoyed his Beethoven 5th, but even more his Beethoven 7th the year it was paired with an insufferably horrible piece moaning about automated phone systems. Obvioulsy conductors are contracted to do some works, but Robertson conducted that Beethoven with such vehemence it was clear what he thought.

In 2010, Beethoven 9 was played by the Ukelele Orchestra of Great Britain, which was hilariously funny for me, though Beethoven might have been glad he was deaf !  There have been some dull performances (Noseda, Proms 2009) and some truly overwhelming good ones (Chailly, Leipzig Gewandhaus New Year 2009). Read more about that one HERE. And of course Wilhelm Furtwängler! Now that's an example of music in value-added context. The Party Goons didn't get it, but Josef Goebbels squirmed, because he knew what Beethoven - and Furtwängler - were getting at. Please read about my discovery of papers in Furtwängler's Home Office file, when the BBC tried to get clearance for the conductor to come to London in 1946.

Having heard Graham Fitkin's L on Monday (Cadogan Hall Chamber Prom 3) with Kathryn Stott and Yo-Yo Ma, I wasn't expecting much from Fitkin's Cello Concerto, but it was altogether more stirring. This time Yo-Yo Ma seems to have written the piece as much as Fitkin did. This is a cellist's dream, the music building directly on what a cellist can do. Technique turned into art. Legato extended so long that it must be a challenge to bow as smoothly as this without breaking. Ma plays sensuously, using full range. It's like he's having a private conversation with the instrument he's known so intimately for many years. Again, it's pretty ty[pical; of Roberston tosprend much more time rehearsing pieces wer haven't heard before to give them best chance of success, and assume the rest will be OK.
Please read this carefully. It is a test in whether people read subtle or literal.  Please read the comments on this post here to see why I'm doing this.  Will people get this or will it be over most heads?
at September 01, 2011

Thank you for your post and for this photo. I passed by these statues but did not have such good ideas then. Too often ideals are captured and we live detached from our beliefs. Noone is perfect but if one perceives an institution as meaning just walls of respectability that seperate ( 'good' from 'evil'), and not so much that harbour, then I feel harmed. These poets seem to stand out like Ellen Orford and the boy in "Peter Grimes". Wagner and Mahler would also defend a "total" approach of art (St Antonius preaching). But the recent Lohengrin showed the contrasts between inner doubts and simple joy (even the 3rd act prelude seemed less simple than the wedding march), so maybe one should try to walk to this hope.

I have to say that this was easily the worst Beethoven 9 I have heard form a professional orchestra. Was the orchestra playing badly on purpose?

I've heard much worse. I think they put their rehearsal time into Fitkin and left Beethoven to chance. Genial, casual Beethoven 9 isn't a good idea, so this was an edifice with no-one inside. OTOH, the meaning of this symphony is goodwill.