Is this movie prophetic ? 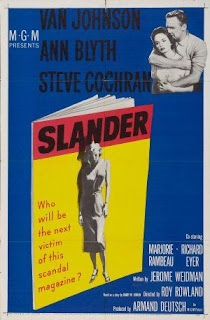 Media Mogul builds empire by ruthless dirt digging. Stories at all costs, as long as they sell. In 1957, they didn't have mobile phones to hack, but the modus operandi is familiar. Lean on journos, lean on anyone, and use the dirt as leverage to pit one person against another. Media Mogul is dangerous because he can manipulate what people think.

In this 1957 film, Slander, Media Mogul is H R Manley (Steve Cochran) who runs a rag called Real Truth that peddles celebrity gossip.The more scandalous, the higher the sales. Manley leans on Scott Martin (Van Johnson). Martin's a puppeteer, same trade as Manley really, but Martin has morals. He's struggled so long with his act that when he suddenly becomes a smash hit, he and his wife Connie (Ann Blyth) know how much they have to lose. Watch out for the marionette show filmed live for a 50's studio audience. The puppets are Cowboy Tex and Ann, who have a wobbly horse for a sidekick and sing cowboy songs in falsetto voices,to sell their sponsor's breakfast cereal. It's a scream, nothing like that today!

Manley wants dirt on a big star Martin knew as a child. Manley blackmails Martin because he's dug dirt on Martin which will destroy his hard won success. Even when Connie leaves him, Martin won't talk. So Manley blasts news of Martin's long ago criminal conviction. Scandal! The Martins' son Joey (Richard Eyer), the Perfect Wholesome Kid, gets taunted and runs straight into the path of a car.  Losing his kid is the last straw. Martin goes on TV and denounces Manley. Unabashed, Manley thinks it's a great way to boost sales and plans to exploit the notoriety. Teflon coated, flame proof ?  In the real world he'd get away with it. However, Manley's ancient mother, who despises what he does, shoots him dead.

This is a fantastic movie, very tightly scripted and acted. Highly relevant today even tho' Manley didn't get cosy with cops and politicians. The movie was based on a real celebrity tabloid in the 50's. Manley's mother (Margaret Rambeau) is a character. His obssessive "love" for her is more like control freakery. Rupert Murdoch's mother is still around, aged 104. What does she think of recent events?.Though obviously she wouldn't dream of being like Manley's Mama.One thing that's really different from the present is that the movie steadfastly pins the blame of those who buy Manley's rags. It shows how lots of people then didn't approve. The real life Scandal sheet collapsed because people stopped buying it. But I guess it's easier to reject a rag that deals with movie stars than one that deals with politics.
at September 16, 2011

Email ThisBlogThis!Share to TwitterShare to FacebookShare to Pinterest
Labels: Movies

Wow. I didn't expect to find a movie review here but I like it.

Lots of movies on this but I haven't figured how to sort them properly. Lots of Chinese and Japanese movies too and movies with good music. Welcome anytime !