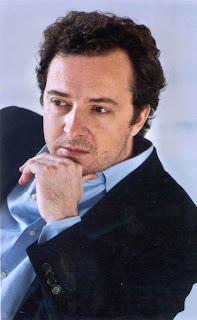 What, actually, is Lieder singing?  Christian Gerhaher's recitals at the Wigmore Hall this week are an opportunity to assess the differences between opera and Lieder. Gerhaher has been singing at the Wigmore Hall for years, so regular Lieder audiences know him well.  He shot into stardom with more mainstream opera audiences with his Wolfram in Wagner Tannhäuser at the Royal Opera House last year. (Please read my review here) Gerhaher's Wolfram was sensationally beautiful, perfectly fitting the other worldly, rarified purity that is in Wolfram's character. Few baritones have that tenor-like lightness of touch. Gerhaher's Wolfram shimmered, but Elisabeth still chose Tannhäuser. Think what Wagner meant by that.

Vocal music, almost by definition, is about meaning. One of the fundamental differences between opera and Lieder is how meaning is expressed.  It's not simply a question of refinement or detail, but of perspective. In opera, an artist creates a character.  In Lieder, the character "is" the artist himself.  In opera, a singer is expressing what the role represents in the context of the opera. In most Lieder, text is confined to a few lines from which a singer must extract maximum possible meaning . No help from plot or orchestra. Opera singer expands outwards. Lieder singing expands inwards.

The Schubert song cycles Die schöne Müllerin (D795) and Winterreise (D911) allow more context than single songs, but their narrative is internal, not external. Significantly, both are journeys, where landscape marks stages in the protagonists' inner development. Gerhaher and Huber also gave a recital of Schwanengesang (D957), but it's not actually a song cycle but a compilation put together by Schubert's publisher after his death.

Die schöne Müllerin is interpretively more challenging because of its deliberate contradictions - cheerfully babbling brooks and declarations of love. But for whom, and  by whom? The high tessitura in Die schöne Müllerin is meant to suggest the miller's  naivety. It's a complication that a light, airy baritone like Gerhaher doesn't have to contend with, so the cycle is a good test of his interpretive skills. This performance was infinitely better than his recording with budget label Arte Nova six years ago, which fortunately will be suuperseded with a new recording. Gerhaher uses his range more effectively, and is more secure shaping phrases. His singing is particularly attractive in songs like Des Müllers Blumen which could be mistaken for a love song, out of context. Yet almost from the beginning the poems hint at altogether more sinister levels. The emotional range in this cycle is much more challenging than the vocal range. In Der Jäger, the miller's jealousy erupts into anger. Gerhaher expresses this through increased volume and projection, which is effective enough, but doesn't have quite the emotional wildness that can make this song so troubling. Gerhaher's miller isn't menacing, even in Die böse Farbe with its hints of what today we'd call stalking, but a poetic dreamer. Gerhaher is pleasant, but if you want limpid sweetness, Fritz Wunderlich sings with such exquisite poise, his emotional denial is chilling.

What made this recital unusual was the inclusion of three poems from Wilhelm Müller's original set of 25, which Schubert did not set. Das Mühlenleben describes the girl at the mill, but comes between Der Neugierige and Ungeduld, which rather breaks the mood. On the other hand placing it after Am Feierabend extends that mood too long. More effective is Erster Schmerz, letzter Scherz before Der liebe Farbe and Blümlien Vergissmein after  Die böse Farbe, for the spoken poems garland the two companion songs. Gerhaher's reading of Blümlien Vergissmein was lyrical, leading smoothly into Trockne Blumen, enhancing the song.

In Winterreise the protagonist is leaving behind a relatively real world and heading into the unknown. There are far fewer clues to his psyche in the text. That's why Winterreise is so fascinating, because the possibilities are even greater.Performers have to connect to something in themselves to create an individual approach that conveys something personal to the audience.

Those who've come to Gerhaher and Lieder via Wolfram in Tannhäuser will admire the clean tone and even timbre of Gerhaher's singing.There's plenty of scenic beauty in Winterreise, and some performances I've heard make much of the external-internal interface, but Gerhaher describes rather than contemplates.  Individual songs like Frühlingstraum are beautifully modulated. Winterreise moves in stages, and the structure of this cycle is significant. The protagonist is heading somewhere, even if we don't know what will come of it. Is the Leiermann a symbol, and of what? Does the cycle end in death, madness or, even more controversial, resistance? Here, we're admiring Gerhaher's smooth technique, so for a change, it's up to us to be the servant of the music and what it might mean.