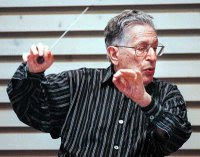 Kurt Sanderling has died, a few days short of his 99th birthday. A true Berliner, born in what was then East Prussia, exiled in 1935 to the USSR, where he spent his formative years. In 1960, he returned to Berlin to head the Berlin Symphony Orchestra and later the Dresden Staatskapelle. Sanderling was one of the great names in music in East Germany, which is a key to his style. He's uninfluenced by the glitz of the west, or  by capitalist commercial pressures. Despite the repression of the DDR regime, it was a haven for high musical standards. Unlike so many conductors in the west, Sanderling knew first hand, and for longer than many, what it was like living in a totalitarian state, which may or may not give his work a different perspective, to. say, Herbert von Karajan,  Sanderling's Cold War rival.

Sanderling is specially well known for his Shostakovich, since he knew the composer personally, and worked with Yevgeny Mravinsky. Seek out his recordings of Shostakovich which are masterful. Sanderling was also thoroughly versed in other Russian repertoire, for obvious reasons, but his work with "western" composers is even more interesting. His Sibelius, for example, is craggy, nothing like Karajan, though both are individual, much closer, one thinks, to the composer than the softer, Romantic style popular earlier.

Sandertling also had a passion for Mahler, which he shared with Shostakovich. One of my absolute all-time favourite Mahler Das Lied von der Erde is Sanderling's recording from the 1980's with Peter Schreier,  Birgitta Finnila and the Berlin Symphony Orchestra.  Schreier is unbelievably intense, full of depth and nuance. Sanderling, too. This is a performance of rare intensity where savage anguish mixes with exquisite refinement. Finnila is not quite in that league, though she's better than many. It's just that Sanderling and Schreier are so good. This is a keynote recording because it's so uncompromising.  Get it HERE. There's a new DVD release where Sanderling conducts it but  probably no comparison except for die-hard fans of English singers and orchestras.

Because Sanderling's main career was so tied up with the eastern bloc and its socialist ideals, we're fortunate that recordings are plentiful and cheap (and lots more in the archives from radio broadcasts). Top recommendation is the 16 CD set from Berlin Classics. It's huge and comprehensive, and has appeared on other budget labels, like Brilliant Classics for £9.99! (though that's no longer available, like the complete-ish Shostakovich set)  Here too is a rare interview (auf Deutsch) with Kurt Sanderling in Berlin, 2004. Very informative.

Listen below to the clip of Sanderling's Das Lied von der Erde. How Schreier curls his tongue and spits out resistance, then warms as he sings of the sensual second Goldener Pokale. Every phrase deeply felt "Herr dieses Hause" with defiance. Nothing comfortable about this! The trumpet call, the strings which seem to search infinite heights. Then the sudden end, life cut off short. Ferocity in this song matters, for it's a counterbalance to the Abschied. No loss, no transcendance. Without the ferocity of this first song, the impact of the Abschied is muted. There's nothing "pretty" in Das Lied von der Erde. In the unlikely event I'd have to choose one perfect Mahler moment, this is it.