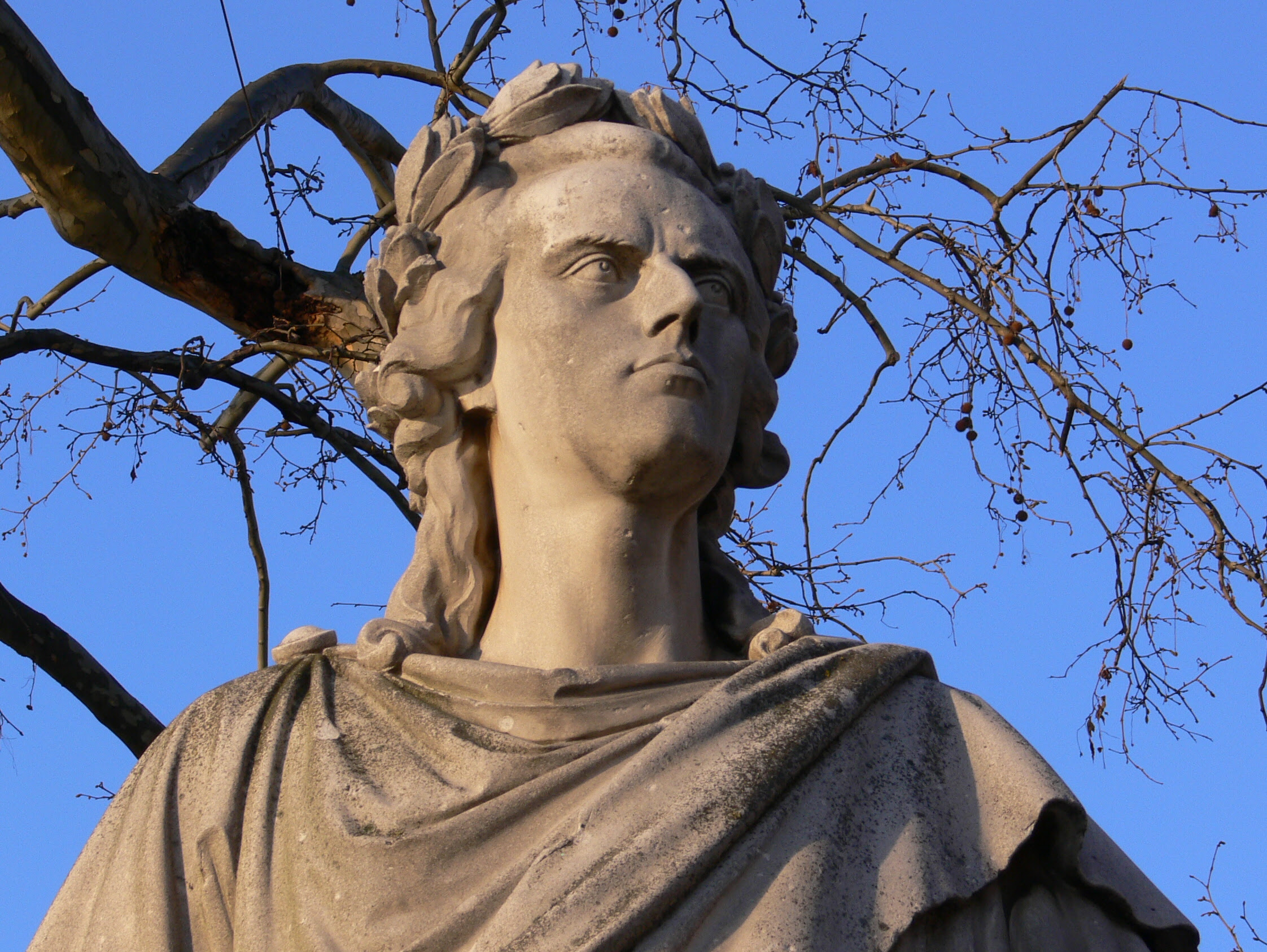 While the whole music industry seems to be spiralling dementedly downmarket, the Wigmore Hall keeps standards extremely high. This Opening Concert of the new season was devoted to songs to texts by Friedrich von Schiller, and not just the most popular. Goethe gets more musical settings than any other poet because his idiom lends itself naturally to song. Schiller, on the other hand, wrote texts that read well on the page but don't necessarily "sing". All the more reason, then, to cherish the courage behind this concert. (photo : Schiller's statue in Stuttgart,  Andreas Praefcke)
This concert, Friedrich von Schiller - Ein Leben in Liedern, was organized at very short notice. Soile Isokoski had originally been scheduled to sing and to judge the Wigmore Hall International Song Competition, but she was indisposed. The programme was very far from Isokoski's usual repertoire, but so well put together that it was satisfying compensation. It bears the hallmark of Graham Johnson, whose experience in designing good programmes is legendary. Johnson's knowledge of this repertoire is equalled by few (Richard Stokes and Richard Wigmore excepted). Go to the Hyperion Records website and read Johnson's programme notes for the 37 disc set of Schubert songs. This is what programme note writing should be, stimulating an erudite audience like that at the Wigmore Hall.  Indeed, audiences completely new to the genre are even more badly served by superficial, clichéd work, devoid of the analysis and contextual connections that make programme notes worth reading in the first place. The Wigmore Hall gives medals for services to Lieder. Why not Graham Johnson?

How daring to place not one but several long strophic ballads together! Schiller's poetry isn't often lyrical in the way that Goethe's is, so musical settings tend towards declamatory and need to be livened up by good performance or they can descend into dull. Luckily many good singers rise to the challenge. Fischer-Dieskau, Matthias Goerne, Wolfgang Holzmair and Christoph Prégardien had/have them in their repertoire. There were two stunning Die Bürgschaft D246 at the Wigmore Hall (Holzmair and Prégardien) a while back, about a year apart, both performed so vividly the whole song became a dramatic monologue. Quite an achievement for a 20 minute song where the "characters" as such are fairly stylized Classical Heroes.

Fortunately Christopher Maltman has these songs in his repertoire too and has worked so often with Graham Johnson. These Schiller songs suit Maltman's voice and style, for they benefit from rich-toned gravitas. In Der Kampf  D594 Maltman declaims dramatically, so the song sounds like a vignette from a much larger theatrical piece. Very Schiller, more unusual for Schubert. Maltman carefully negotiates the tricky "Bewundert still mein heldenmütiges Entsagen, und grossmutvoll beschliesst sie meinen Lohn.....". If  strain appears later in the next strophe, Maltman's earned his reward.

Tellingly, Johnson quotes Carlyle in his programme notes. Schiller, said Thomas Carlyle, was "too elevated, too regular and sustained in his elevation to be altogether natural". Hence Johnson adds a few songs which lend themselves to earthly lyricism. An den Frühling (D587), Das Geheimnis (D793) and Dithyrambe (D801) bring out the gentler Schiller, and give Maltman a chance to exercise softer, warmer colours. These more "Schubertian" songs allow Johnson to play with great, expressive verve.

Schumann set very little Schiller, but it was interesting that Johnson included Schumann's Der Handschuh op 87 (1850). This is interesting because it dates from the period when Schumann was experimenting with theatrical music, like Genoveva op 81 (of which there's much on this site) and Scenes from Goethe's Faust. Schiller's poem presents a scene of striking dramatic possibilities. Like a Roman Emperor, King Francis 1 is entertaining his court to a gory spectacle where lions, tigers and leopards rip each other apart. A lady drops her glove into the fray to taunt her lover. He gets the glove back but dumps the lady. The drama is in the situation, rather than in the personalities, so Schumann sets it as a decorative story, which Maltman and Johnson tell without too much savagery.

An interesting sub-theme flows through this programme: the unsentimental breaking of bonds. The protagonist in Der Kampf has pledged to some heinous crime by the one he loves. The hero in Der Handschuh learns that his lover wants him dead. In Die Bürgschaft, a man called Moros tries to assassinate the king although he's due to marry his sister off the following day, Oddly enough the King lets him go home, but Moro's friend must be crucified if Moro doesn't come back in time. Cue for glorious dramatic effects in the text, storms, floods, brigands, all of which Moro defeats arriving just as his friend is about to die. Even more oddly, the  king decides that all three should henceforth be friends. Will Moros suddenly embrace the tyrant? Why schedule an assasination with a wedding? Logic doesn't count in melodrama. This time, "meaning" in Lieder means meta-meaning, so as long as twenty steady strophes are delivered with panache, the ballad works.

All this summer, we've had Proms, operas and orchestral performances influenced by Alpine imagery and the freedom and danger mountains evoke. Our debt to Schiller's Wilhelm Tell is far reaching. Johnson and Maltman performed Schumann's Des Buben Schützenlied together with three settings by Franz Liszt, Der Fischerknabe, Der Hirt and Der Alpenjäger.  Johnson makes a good point about Schiller's political views and Schubert's friend Johann Senn who was exiled from Vienna. The Metternich police state had no hold on Schumann and Liszt (or on Rossini or Catalani), so they can indulge in songs of lyrical grace, untroubled by the darker side of what Tell symbolized. At times the tessitura is high for Maltman ("im Paradies" in Der Fischerknabe) but this enhanced to the sense of danger that runs through Schiller's play. Johnson played so evocatively in the Liszt songs that at times I thought of Edvard Grieg.
at September 12, 2011