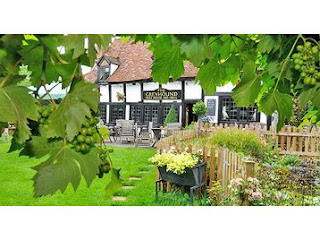 Now you see why I'm too busy to get to Salonen's Sibelius at the South Bank. I was at The Greyhound, nestled in the Berkshire countryside. It's an ancient half-timbered village pub with weathered flagstones. Dozens of pubs like this in this part of the countryside. But the Greyhound is run by Antony Worrall Thompson, one of the biggest names in British cooking. The atmosphere is unique - unpretentious country ambiance but gourmet class food, for which you'd pay big money in London.

English food gets a bad reputation because it's usually so mean and ill-prepared. The Greyhound proves that English cuisine is not an oxymoron. Here English fare is done so well that at last you can understand why Europeans once envied the British for their rosbif and accompaniments like horseradish suace, Yorkshire pudding (a kind of starch) and cauliflower cheese. Simple ingredients, cooked properly. That's all it really takes.

The meat here is sourced from Gabriel Machin, the Henley-on-Thames butchers that's been family-run for over a hundred years. Vegans look away. Machins are artists with meat. They kill, hang and prepare their cuts the craftsman way, and make superlative sausages and hams. Traditional shop, too, in a Tudor building. When I first started going there they had sawdust on the floor (full of blood, so I don't miss that).

Even though most of the Sunday Lunch crowd scoffed Sunday Roast, as one should, my pal and I chose something different. Thai crab soup with coconut and coriander - chunks of crab, aromatic. I thought about the starter of wild mushrooms (locally sourced - lots of woods round here), but settled on roast fig stuffed with nuts and blue cheese, wrapped in Parma Ham and served on a bed of Caesar salad. The fig was huge - probably not locally sourced though there are several historic fig trees in the neighbourhood. The Caesar dressing was so rich (and tasty) that next time I'm having this instead of a main. Fig, ham and two cheeses - perfect balance of flavours!

Monseuir settled on fried chicken and Madame on a cheeseburger. But not like any you're used to. The chicken was crisp and light, flavoured with real herbs not Colonel Sanders's chemicals.  The burger was top-quality lean beef and tasted like steak. No additives. The best burger I ever had was in a cliff top shack on the Northern California coast, where the owner got his meat from an organic ranch and did everything himself. Perhaps Worrall Thompson does too. Around the end of service, he and his manager appear in the dining room and ask if all's well. as if they genuinely mean it. From the excellent service and high standards, I think they do. Usually, I don't give a stuff about celebrities, but these two seemed like good people, glad to be doing a good job.

Although we'd eaten more meat, cheese and mayo than usual, this meal didn't weigh one down as the ingredients were so fresh. The Greyhound is generous with water - we consumed two whole jugs - and that helped, too. So though we only had two glasses of wine we had room for dessert. English puddings, done perfectly, full of fruit not lard. We were tempted by the cheese selection -  a choice of local soft cheese and imported gourmet fare, but the ice cream won. Peach ice cream with melon and mango sorbet. Each divinely light and sparkling - the melon tastes like cantaloupe whipped into a mousse and frozen.  We were shocked - poistively - by the price, which included 4 coffees. Less than what you'd pay for in an average, boring place. And at the Greyhound you can sit outdoors in a garden with a real koi pond and a vine covered secret arbour if you're so inclined. Here's the website.
at September 25, 2011