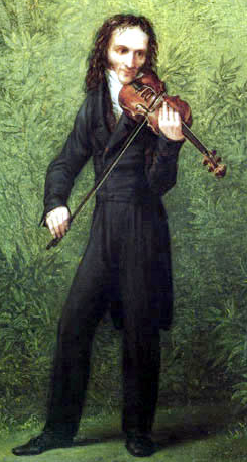 Bigger than Elvis, bigger than the Beatles - Niccolò Paganini the first megastar of popular music (before it became labelled as elitist and classical). Thousands poured into concert halls to hear him. Promoters audaciously increased ticket prices, which further fuelled demand. So extreme was Paganini's technique, and the flamboyance with which he used it, that there were rumours that he was in league with the devil. Paganini cannily used notoriety as part of his image, becoming the richest and most talked about performer of his time.Sex, scandal and pizzazz - Paganini was the rockstar of his era.

Christopher Nupen's documentary Paganini's Daemon: a most enduring legend is being released by Allegro Films on DVD from 26th September. It's a study of how Paganini was driven by demons in his personality, pushing himself to extreme limits. In the process, he created the concept of soloist as showman. Liszt was mesmerized, as was Chopin. Modern superstars are part of a tradition that dates all the way back to Paganini.

Excellent musical values. Gidon Kremer plays satisfyingly sizeable extracts of music Paganini would have played with great verve and freedom, as if he's thinking in Paganini mode. There's a bonus track, in which Kremer talks about perfectionism and the 13th Caprice. Kremer believes in discipline and technique, though communication doesn't come from strict rules. But he's "infected with the virus of perfection", ever striving to excel.  It's a tantalizing hint of what is to come with another Nupen/Allegro film, Gidon Kremer: Man of Many Musics (First Come the Sounds).

All Christopher Nupen films are meticulously researched and presented objectively, and this is a classic. The film is elegant and stylish, but a tremendous amount if work went on behind the scenes. Wonderful archive material, much from the Paganini Institute in Genoa, some familiar and some not so well known.  Strong scholarly values combine with strong film-making skills. The opening sequence, for example, is shot in a church with a shadow of a violinist superimposed on a fresco. In 1801, Paganini was given an unprecedented invitation to play an interlude at a papal mass. He took 28 minutes. Already, at 19, Paganini was doing things on his own terms.  The sequence captures Paganini's background, future and personality in a few brief moments. It helps, too, that the "talking heads" are people like Goethe and Heine, given to succinct expression. Quotations move briskly, and illustrations are well chosen. A series of charcoal sketches are edited together imaginatively (Peter Heelas) so the drawings seem to move. Paganini comes alive on the screen !

Most of Nupen's films deal with the artistic personality. What makes a person do what he or she does, and why? Just as we'll never know what Paganini's playing sounded like, we can only speculate on what drove him, but it's an intriguing process. Why did he push himself to extremes, long after he had all the money and success anyone could cope with? Wracked with frustration and illness, Paganini kept starting new ventures. The demonic image pursued him in death, for he was not laid to rest for many years after he died. This is a very stimulating film because it raises all kinds of questions about celebrity and its effects on art and on artists. When does success become its own nemesis? Is success a Faustian pact? Nupen films challenge because they don't provide easy answers but make us think and feel.  That's why DVD instead of one-off TV screening. The more attention you pay, the more you get.

More on the art of documentary making :
Surviving Hitler: A Love Story
The Prince and the Composer : Hubert Parry Back to the Ghetto