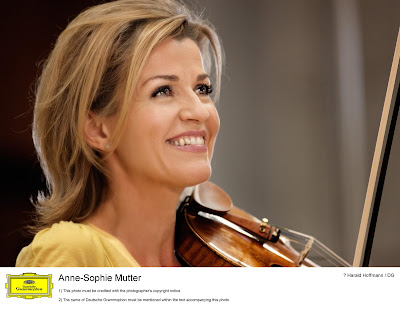 The Pittsburgh Symphony Orchestra's two BBC Proms 68 and 69 dovetailed nicely, again proving the adage, "Music should disturb the comfortable and comfort the disturbed".

When Anne Sophie Mutter plays Wolfgang Rihm's Gesungene Zeit (Time Chant) she brings out its profound spirituality. Rihm wrote the piece for her 20 years ago, specifically attuned to her strengths and to the violin she prefers. It is one of her signature pieces. She's recorded it twice, first with Levine and more recently with Alan Gilbert (new release on DG here).  In twenty years much has happened to Mutter - and to us - so hearing the piece again in this context is deeply moving. Mutter showed how music can lift us to emotional and spiritual levels which transcend the ordinary grind of life.

Knowing how high profile this Prom would be, Mutter seemed charged with supernatural intensity.  The exceedingly high tessitura seemed to defy gravity, soaring into a stratosphere few dare explore. Her technique is so perfect that she can create pitch so high it's almost beyond the threshold of human hearing. This is the aria of an angel. No human voice could sustain legato that long and at that pitch. The music seems to float in the air, untrammelled by normal constraints. At times it swoops gently down towards the other instruments, lifting them upwards too. Two glorious tumults, when all seem to be singing together. Dark murmuring chorale (listen to the contrabassoona and low winds), col legno meeting tapping in the percussion.  Mutter's line sweeps upwards and hovers. One last low-flying farewell to the orchestra and then back into the stratosphere, beyond mortal realm.

It would be tempting to draw parallels between Rihm's Gesungene Zeit and Mahler's Symphony no 5, but Manfred Honeck and the Pittsburgh Symphony Orchestra wisely stick to what's in the score. Mahler's views on the chamber-like nature of the piece are fairly clear. The Adagietto has acquired a lachrymose reputation through its use in movies and such things as Compilations for Valentine's Day and so on, but the symphony itself is much greater than popular myth. (There is a long story attached to how this developed, but I won't go into that here). Honeck respects the structural logic of the symphony, so this a fiull bodied, solid reading, satisfying though not specially spectacular.

But why start the Prom with the Prelude to Lohengrin Act 1? It's a grand opening, but listeners automatically go into Wagner-mode, thinking of what will follow in the opera. The days of "bleeding chunks" are long gone, since  nowadays, we're more accustomed to more integrated and demanding programmes. Lohengrin always sounds wonderful, but it might have been better to concentrate on Rihm and Mahler.

Please read about Prom  68 where Honeck and the Pittsburgh Symphony played Beethoven Tchaikovsky but not Braunfels. There's more on Braunfels on this site than anywhere other than the Braunfels website itself. There's also plenty more about Wolfgang Rihm on this site. Like Braunfels, Rihm's not known to millions, but to tens of thousands, as he's probably one of the most important European composers of our time. Mutter is no fool artistically, she knows why she likes playing Rihm.
photo copyright : Harald Hoffmann
at September 07, 2011