A dictator stands on a balcony addressing the masses. "We are a great country, we need space to live" The crowds roar in hysterical approval. Might is Right, so it's OK to declare war on "small rotten countries" next door. Bílá nemoc, or The White Plague is a fascinating film because it was made in Czechoslovakia in 1937. The Czechs knew what a larger country meant by Lebensraum, but the rest of Europe wasn't listening. The script was written by Karel Čapek, who wrote the text for Janáček's The Makropulous Case and much radical social commentary. Čapek died of natural causes in 1938, thereby escaping the Nazis, who were after him. Watch this movie and see why.

This film is also interesting because it was directed by and starred Hugo Haas, brother of Pavel Haas, the composer who was murdered in Auschwitz in 1944. Hugo Haas was a big star in Czechoslovakia, working until at least 1940, starring in films with Lída Baarová, whom Goebbels made his mistress. Pavel, his elder brother, wrote film scores for sevearl of Hugo's movies. One I've heard (film: Mazlíček,The Pet) sounds more like Hanns Eisler at his most didactic than Haas's chamber music, but it fits the nature of the film.  Pavel was sent to Theresienstadt and later Auschwitz. Hugo Haas manged to get to Hollywood, where by 1945, he starred in John Wayne movies and in King Solomon's Mines, and made his own B movies. [Since writing this, I've been able to see quite a few of Haas's American movies which are of an extremely high standrad] 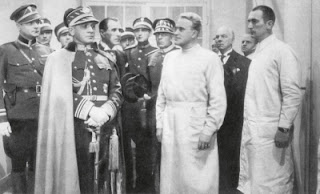 In Bílá nemoc,there's a sudden frame of a man in the howling mob outside the Dictator's palace (which is monumentalist Art Deco and filled with geormetric symbols) . It's Dr Galen (Hugo Haas). There's a mysterious plague in the country, which starts as white spots on the body and kills everyone it touches. Everyone's paranoid about contamination. Galen has a cure but he's not allowed to use it because his terms are too high. So he's only allowed to treat the destitute in Ward 13, who don't count. But those he treats, survive. Gradually the plague spreads, and the paranoia. The Dictator visits the research hospital but Galen isn't allowed near him. Galen is anti-war, and that's another form of plague. Eventually, Baron Krog, the second most powerful man in the land gets sick and is saved when he promises to respect Galen's ideas.  Galen meets the dictator. Both of them fought in the Great War, but the Dictator believes war is a good thing and Galen thinks otherwise. Soon, the Dictator gets infected too, has a change of heart, signs ceasefire documents, and summons Galen. Galen tries to pass through the howling crowds, but they confront him when he talks anti-war and they beat him to death. No-one now to stop the plague, or the war.

PLENTY more on this site and in-depth too, on Czech and Weimar music and film, Entartete Musik, Theresienstadt composers, anti-war and non-violence. For me this subject is a principle of belief. Please  explore
at September 01, 2011