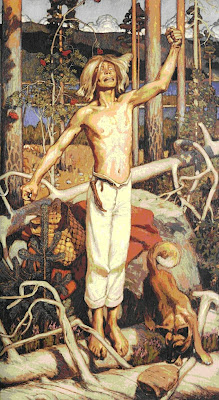 Kullervo, karlevon poika! Sibelius Kullervo at the Royal Festival Hall, conducted by Esa-Pekka Salonen. Monica Groop and  Jukka Rasilainen are soloists, and it's the Philharmonia.  Kullervo is an amazingly audacious piece, so daring that it was  suppressed for many years..Being a perfectionist, but also insecure, Sibelius was so self-critical that he apparently didn't want the piece heard after early performances. Robert Kajanus, the first conductor, and major figure in Finnish musical life, (who also wrote an earlier Kullervo) kept the manuscript. Performances are not that rare - five in about ten years in London, but I keep missing them, which is a pity as live it must be spectacular.

Salonen recorded Kullervo several years ago with the LA Philharmonic, Mariana Rorholm and the King of Finnish singing, Jorma Hynninen, but I suspect that tonight's performance will be even better. The Philharmonia is brillliant, and Salonen enjoys wonderful rapport with them. Nothing safe, comfortable and sub-Tchaikovsky about Salonen's Sibelius. Sibelius so dominates Finnish music that it was wise of Salonen to steer clear of established tradition until he himself was mature enough to take Sibelius on his own terms. It's a bit like having an extremely famous and very dominant father whom you appreciate better if you're able to stand up to him. When Salonen conducted his Sibelius series at the Barbican  a few years ago, many were shocked, because he made the music sound so fresh and radical. But it is! We'd just forgotten. I've written a lot about Kullervo over the years, but so busy at the moment I can't even go to the concert. But please read HERE a very good article about Sibelius Kullervo in Le petit concertorialisteVery stimulating!  For recording recommendations, please see HERE

Well, there are other "kings" in Finnish singing too ..