Walter Braunfels' Phantastische Erscheinungen eines Themas von Hector Berlioz (Fantastic Appearances of a Theme by Hector Berlioz), Op. 25 (1914-17) is a fascinating work, though you'd never guess from the truncated rump that was done at Prom 68. I was so upset that it's taken me ages to write about the complete(ish) piece, but here at last, as promised. Die Vögel, Te Deum,and Jeanne d'Arc to follow. Fantastic Appearances and  Die Vögel  need to be heard together, for both were written at about the same time, when Braunfels was fighting in the First World War. Like so many of his generation that war changed everything and ushered in what we now call the "Modern" age. Braunfels is not escaping into retro Romanticism but confronting the issues of his times without compromise.

Phantastische Erscheinungen deals with a single theme from Berlioz's The Damnation of Faust., specifically the scene where Faust and Méphistophélès enter the Auerbach tavern in Leipzig. Both of them are out of their usual element, among "normal" people, so there's more to the scene than divertissement. They've come to learn about life and "le fatras de la philosophie". Brander sings the song about rats invading a kitchen. Méphistophélès's response is the song of the flea. A king becomes obssessed with a pet flea and soon the whole court is infested with fleas. "Mais ce qui fut bien pire, C’est que les gens de cour,Sans en oser rien dire,Se grattaient tout le jour"  What's significant is that the courtiers were too cowed to object, so they suffered. The solution, says Méphistophélès, is to squash the fleas forthwith. Nothing "Romantic" about that. 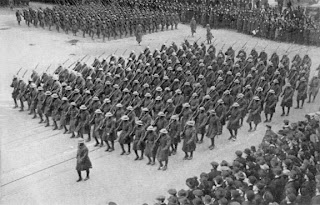 Braunfels begins with an opening like a vista, then zones in on the theme. The moderato variation is glorious, as if Braunfels is describing the splendour of the court, but that's quickly blown away by the turbulent "gusts of wind" in the Gemessen. Storm clouds ahead, even allusions to Faust and Méphistophélès flying through the skies. This "Appearance" is wild, the relentless "winds" pushing higher and higher. No "sudden end" in this part, but stomping ostinato building towards a climax. The unstoppable march of pounding feet ?

In the next three variations, Braunfels examines the basic theme more wistfully, as if he's looking back on more innocent times from different angles, trying to reflect on how things came about. Notice the endings, where in the original, Méphistophélès suggest a sudden, crushing solution. Here they're muted, even open ended. There was a lot of good in Wilhelmine Germany and indeed in German culture as a whole. There's even something Beethovenian in the grace of the Ruhig. Perhaps Braunfels wasn't the kind of man to do violent Putsches. In this work, he considers a small theme from all perspectives. 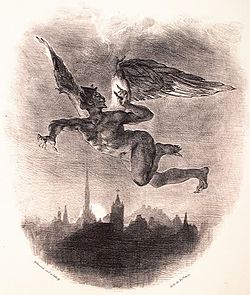 The Ruhig is transitional, rather than purely "restful", for Braunfels is now looking ahead. The 7th variation is mercurial, like a sprightly dance, but gradually the darker undrtones draw in. All three variations in this penultimate group start with the same exposition, developing different ways. The 8th Appearance is marked by dizzying, spiralling diminuendos, which lead to whizzing, strident alarums. Hence the very short tenth segment, dominated by a single trumpet. The "winds imagery" whips round it, taking over completely in the turbulent 11th variation, a highly dramatic, demonic Moderato. You can almost picture smoke rising from Hell, storms tearing across the heavens. The final variation, is march-like, loud and expansive. Even so the rising cadences soar above, as if searching beyond into the distance. For me, the image of Faust flying above the landscape, borne on the heavy wings of Satan, til eventually textures open outward in an ending that's almost like a chorale. Is Faust redeemed? Braunfels doesn't commit. The Finale restates the basic theme with elements from all the variations - bright, manic, chilling. The Phantastische Erscheinungen are so tightly bound together, that taking excerpts out of context doesn't do justice to this fascinating composer.
at September 16, 2011