Prom 70 - Why The French Freischütz matters 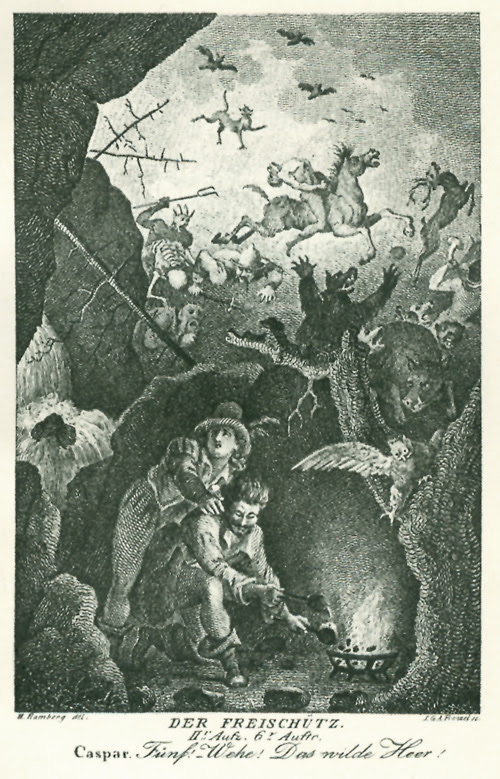 What fun tonight's Prom 70, John Eliot Gardiner and the  Orchestre Révolutionnaire et Romantique. So what if it's in French, not German? No doubt the same folk who scream sacrilege at Berlioz's sin will happily go to ENO for Berlioz and much else in English. Der Freischütz marks a turning point in music history, influencing Mendelssohn, Schubert, Schumann, Loewe, Wagner, even Franz Schreker, so it matters when it influences a composer outside the German tradition. .

Berlioz was only 21 when he heard a bowdlerized version of it in Paris, and set out to learn the original from the score. He didn't merely translate, but adapted it to French popular tastes. out with the long stretches of dialogue (which I adore), in with brisker recitatives. Berlioz also had the wit to adapt the music to the new text so the lines don't jar but feel natural. And he's learning about orchestration. Berlioz would become the great music theoretician of his age. His Treatise on Instrumentation was avidly discussed by Mahler and Strauss. (there's even a section on the saxophone, which had just been invented). A copy stood on Mahler's bedside table. So don't dismiss what Berlioz is trying to do in the French Freischütz.

Of course Le Freischütz doesn't sound exactly like Der Freischütz. All his life, Berlioz would be adapting ideas and developing styles. adventuring outside the French musical mainstream. Maybe that's why he's interesting. So think of the French  Freischütz as a missing link between the early German Romantic and other styles that folllow, and not as Weber manqué. This is very early Berlioz and he's still finding his way. (The effervesence of Weber still eludes him). Weber's Der Freischütz.is notoriously difficult to stage realistically, what with Wolf's Glens and so on. And if Der Freischütz is tricky, remember Euryanthe, which the Royal Opera House did stage about 20 years ago. The plot's so improbable anyway. So the Prom 70 semi-staging is an excellent compromise between theatre and concert   Wasn't it great when Samiel boomed down from an upstairs box, and witches' screams burst out all thru the Royal Albert Hall?

Extremely good singing, Gidon Sacks (Gaspard/Kaspar) gorgeously sexy and demonic, Andrew Kennedy (Max), looking bewildered (as Max should be) but singing with heartfelt determination. Not a weak spot in the singing, but it must be remembered that because the syntax is French, singing styles won't be like German. The chorus (the Monteverdi Choir) is great fun. Yes, fun! No-one ever took plots like this seriously. The idea was to get thrills from the ghostly whippoorwills in the orchestra, and the idea of a confrontation with Samiel, the devil, the joyous overtures and choruses. We luxuriate in the Overture, the chorus of Chasseurs, lovely individual arias and entr'actes.

Anyone who knows Der Freischütz has Carlos Kleiber's recording with the Dresden Staatskapelle (Weikl, Janowitz, Mathis, Schreier) tattooed permanently into their soul. And so it should be, for it's a performance of genius. But that's exactly why we need to listen to John Eliot Gardiner and the Orchestre Révolutionnaire et Romantique in period performance. Period instruments are never going to sound as full and as wonderful, but they remind us of what the sound world of the early 19th century might have been like. Indeed, part of the charm of Gardiner's orchestra is that they are genuinely bucolic. People then would have identified with natural horns and village dances, so they might have heard the warmth of familiarity where we now hear hokey. Berlioz as orchestrator probably knew what he was doing to create the right atmosphere. We don't need sophistication all the time. A dose of period high jinks reminds us how far we've come.
at September 10, 2011

Excellent! Am listening. Thank you.