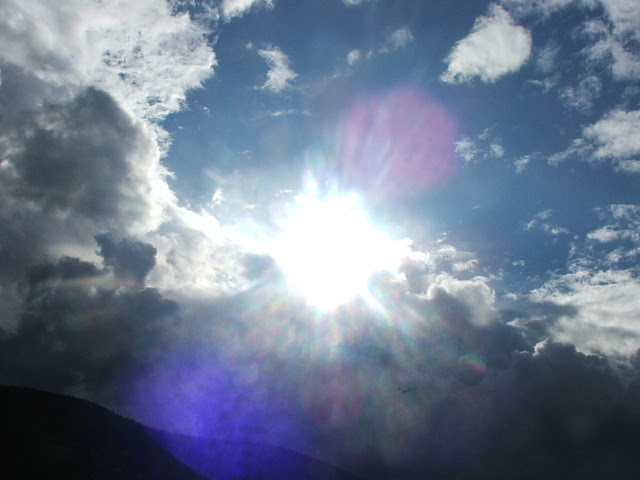 At BBC Prom 63, Simon Rattle brought the Berliner Philharmoniker and did more than just play. They illuminated their music. Ligeti's Atmosphères, Wagner's Act 1 Prelude to Lohengrin, Sibelius Symphony no 4, combined in a flowing seam where each highlighted the other.

The long, reverberating opening chord of Ligeti's Atmosphères gives way to layer after layer of extended sounds. This really is "music from another planet", emanations so pure, high and unnaturally sustained that it must be hell to play. No "melody" as such, but changes of direction and density. Long hollow chords which seem to move from some extraterrestial plane, heralding a rumble from which other chords arise. Low brass pulsate, and the strings shimmer, like rays of light stretching outwards, accelerating in intensity. When I was a kid I used to look up at the sky and think think that shafts of sunlight bursting from clouds were "God", for that's how an abstract idea like God is depicted in religious imagery.

Above all, Ligeti's Atmosphères suggests a soaring sense of infinite expansiveness. Hearing the first strains of Wagner emerge from Ligeti  rings absolutely true in a deeper spiritual sense. Lohengrin isn't historical. Christianity had long since been established by the time Heinrich der Vogler came to Brabant. or he wouldn't be fighting the Huns. In any case, what's authentic about  Lohengrin or the whole Grail community for that matter? From a theological perspecvtive it's hogwash, if not outright blasphemy.  What the Grail represents, however, is something much more primeval than Christianity. It's an ideal that transcends time and context. Hearing this Prelude after Ligeti suggests that Grail values transcend human history, and derive from the cosmos. It goes without saying that the Berliner Philharmonikers are good. Here, they were exceptional. It wasn't just the beauty of their playing, it was the emotional committment .

Theodor Adorno hated Sibelius, in part because performance practice in those days emphasized the  picturesque aspects of his music rather than the innate structural qualities. Sibelius Fourth Symphony was a breakthrough, so shocking in its time that many thought it incomprehensible. In this performance, Rattle and the Berliners show how visionary Sibelius really was. Dark, primordial undercurrents, rent through by blasts of sharply defined chords. The imagery of light in Wagner, the  idea of abstract eternity in Ligeti.  The winds of change so familiar in Sibelius seem to blow from a higher level of consciousness. Sibelius's interest in the Kalevala and nature wasn't regressive but forward thinking. This performance emphasized the "wide open spaces" in the symphony, and the thrill of discovery that makes Sibelius so exciting from a modern perspective. How radical that ending sounds, considering when it was written.

Rattle and the Berliners changed focus in the second part of Prom 63. Ostensibly the connection between Debussy's Jeux and Ravel's Daphnis et Chloe is ballet, but that's simplistic. Ballet music is constrained by the limits of the human body, but abstract music isn't. By choosing the Suite on Daphnis et Chloe rather than the full piece, Rattle could focus on the brisk liveliness in both works. In Debussy, the pace was tempered by a good sense of structure. Games, after all, depend on strategy not impulse. In the Suite from Daphnis et Chloe, Rattle and the Berliners could let loose with greater exuberance, capturing its innate spirit of freedom. Not, after all, so very different from the light-filled, open horizons of Ligeti, Wagner and Sibelius.
at August 31, 2012